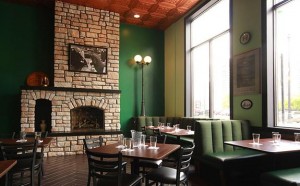 Patrick Fegan (Paddy) and his team of chefs and bartenders are a bunch of characters, the type of people who always seem to have a few jokes in the chamber and a flattering interest in the people they encounter. They are also an ambitious lot, as they prepare for their August 15 opening of Paddy O’Fegan’s, the Fulton Market District’s newest Irish, Canadian, and American (Camerish?) neighborhood pub.

When you first walk into the pub, you will be greeted by Chef Jack Austin’s river rock mosaic floor, which reads “Céad Mile Fáilte,” Gaelic for 100,000 welcomes. If it’s juice and a jig you fancy, introduce yourself to Doug Hall or Cathy McDonaugh (general manager), two kind-hearted souls who will find you a pint to your liking, and then hang a hard left to the stage, where there may be live music playing. Tired from work?  Head to the hearth of the north wall where a massive stone fireplace and plush seatbacks are arranged for optimal relaxation. 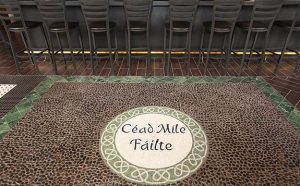 Even to a native Chicagoan, the FM District can hardly look familiar, as restaurants, bars and clubs seem to be popping up in every available storefront. With cutting-edge dining available nearby at Next and The Publican, Paddy O’Fegan’s is no more competing with their trendsetting neighbors for customers as they are bringing new customers to the neighborhood and through their doors—plumbers, meat packers, commuters from the financial district.

The beer and food menus are short and sweet, but offer the possibility of four courses with plenty to choose from.  Appetizers are a mixture of classic pub food (corned beef Reuben rolls) and more unusual offerings (potato skins filled with Canadian bacon and three Irish cheeses), which are all priced between $6 and $11. The Bill Kurtis’ Tallgrass Beef Burger harkens to the long Irish summer that affords their cattle the longest pasture season.  McDonaugh, an Irish native, brings the Canadian influence through with daily deals on draft Labatt Blue and other selections from the French-Canadian Unibroue Brewery.