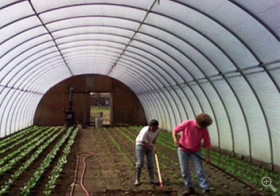 It’s hard to keep from smiling at the Green City Market, where every Wednesday and Saturday it feels as though the South Pond section of Lincoln Park is transformed into a French market on the dairy plains, as guitar strings and children’s laughter echo, and the fire-engine red backdrop of the Farm in the Zoo flashes through the trees. Shoppers and samplers exude energy and gush over the sweet and savory flavors of locally grown produce done right.

The yearlong farmers market in Lincoln Park is not a novel phenomenon, but with a newly landscaped location and Dana Benigno’s fresh face in the director’s chair, GCM presents much promise to grow within its community of committed shoppers and diligent farmers.

One way that farmers are improving their bounty is by using a “hoop house,” which are ground-hugging semi circles constructed from corrugated steel rods and clear plastic to protect early spring crops in the winter. Although they resemble greenhouses, these structures allow air to vent out the sides, and are much less expensive then their pitched-roof relatives. Come February, if you need fresh spring spinach or kraut for your exclusively local restaurant or personal fridge, Green City will have ample supplies and is the only stop in town that will have it local and organic all winter long.

Vicki Westerhoff of Genesis Growers is a GCM veteran of nine years and operates her twenty-acre farm in St. Anne Illinois. Westerhoff earned her stripes by practicing sustainable farming and using hoop houses to extend her growing season and thus the market’s winter bounty. Her hoop houses are huge, and use a fan to force air between two layers of clear plastic to create a blanket of insulation for the plants.

“We grew greens through the whole winter and into the spring in our hoop houses and then as soon as it got fairly nice outside, around March, we transitioned them into tomatoes and peppers, so I would already be harvesting tomatoes and peppers way ahead of the outdoor crop,” says Westerhoff.

The Hull House is also using a hoop house on their University of Illinois Chicago collaborative farm on Halsted Street to cultivate heat-loving crops like tomatoes that would otherwise perish in the harsh conditions. The Chicago Botanic Garden led the way with its Green Youth Farm program that introduces neighborhood youth to the skills of urban horticulture during the offseason.

Support of productive innovations like hoop houses encourages the market’s reputation as a chef’s market, a locavore haven, or the “real taste of Chicago,” as board member Rick Bayless put it in his classic whispery tone. 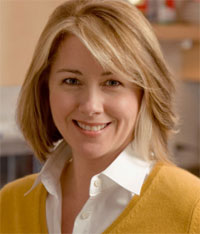 Benigno is excited for the rest of the summer season and is confident that her patrons from Lincoln Park and beyond will keep attendance high during the winter months when the market moves into the Peggy Notebaert Museum at the northeast end of the park every Saturday.

“The job really is about building a community. Green City Market is the production of the community; there is no one person that makes this market happen. It is a collaborative effort between our office staff, our farmers, the volunteers, the board, our volunteer committee and the park district, so it is a group effort and part of my job is to facilitate communications, listening and understanding among all these groups,” Benigno says.

Benigno hails from Vandalia, Illinois (just outside of St. Louis), and is the founder of the website chicagocooks.com and Sweet Girl Desserts. She remembers childhood summers when their family garden produced the majority of their meals, and was the impetus for her foodie fascination and progressive ideas.

“After my twenties, I moved to Chicago and my food education started in terms of dining at all of the fabulous restaurants. That’s when I started getting exposed to fine dishes like salmon carpaccio and the many different chefs and fine restaurants you see here, and that really inspired me. I always love to cook, but once I started tasting that wonderful food I wanted to be able to make it at home,” says Benigno.

Now she helps thousands of her neighbors gain access to the freshest and highest grade produce, meat and dairy the city can offer, elevating curious consumers to the same status as the almost priestly chef class that the market attracts. Benigno plans to have all of Green City’s farmers under one of the six recognized classifications for organic growers by next summer, which will make Green City Market Chicago’s only year-round completely organic and local farmers market.

The Green City Market is located at 1790 North Clark every Wednesday and Saturday from 7am to 1pm during the summer.