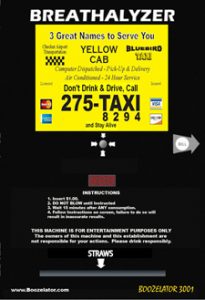 In spite of MADD warnings and DUI risks, far too many folks find themselves throwing back cocktails at the bar with car keys in their pocket or purse. But the fact remains that until they get pulled over and given a breathalyzer test, most people are not aware how much (if at all) they can drink before they safely and legally get behind the wheel.

Enter The Boozelator, a breathalyzer vending machine that dispenses straws for bar patrons to check their own alcohol levels—a strategy that is intended to create awareness of the dangers of drunk driving and also to allow patrons to check and see if they are safe to drive.

The Boozelator (blodad.com), which was showcased during the latest edition of the New York Bar & Wine Show, was created by Florida-based brothers Stephen and Gabriel Jacobs after they realized their home state had one of the largest indexes of DUIs in the country. Concerned by the statistics, they decided to be proactive about it. “We came up with this machine because there is nothing else like it on the market,” Gabriel Jacobs says. “It’s put in a bar for safety reasons so patrons can gauge how intoxicated they are and if it is safe to drive home, and prior to this machine they had no idea.”

I tested the machine twice over the event’s two days. After a few samples of wine and Korean soju, I blew a cool 0.07, which would make me sober enough to drive home. The second time, after a seminar on the evolution of tequila, I ended up with 0.10, and with that result I got a big sign of ‘danger’ on the screen. Thankfully, I had the New York subway just a few blocks away, so I was not in danger of being arrested as I made my way out. But I did wonder about all the other participants who had actually left their cars in the parking lot.

The Boozelator has been on the market since September 2010. “We are in Canada, on our way to Australia and in all the US states,” Gabriel says, adding that the state of Michigan is preparing legislation to require bars and restaurants to carry machines like this in every establishment that serves alcohol. (Ernest Barteldes)