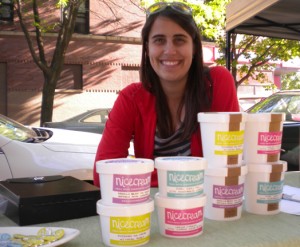 Kris Swanberg began making ice cream immediately after getting laid off as a CPS teacher, calling her product Nice Cream. Her all-local organic model became popular in stores, gaining the attention of Whole Foods and eventually the Illinois Department of Public Health, who recently shut Swanberg down for not having a dairy license and not following the regulations. Swanberg’s business, however, is still at a point where the regulations are cost prohibitive to keep Nice Cream local and organic. Instead of rolling over, this time she’s drawing her line in the sand and sticking up for her beloved ice cream and that of other Illinois artisan creamers.

What originally intrigued you about making ice cream besides the ice cream maker you received for your wedding?
That’s it really! (Laughs.) I just started doing it at home and I couldn’t stop thinking about different flavors and different ideas.

Do you consider your current situation ironic, starting as a laid-off educator only to have your business shut down after finding success?
You’re not here to depress me, are you? I’m just kidding. No, it is interesting: I got laid off and now I essentially got laid off again!

What was it like getting started?
I didn’t know anything about running a business or making ice cream. There were a lot of things I didn’t know how to do, like buy empty pint containers. I didn’t know where you would get those. So when I started I said, “Oh, what if I order them on Amazon?” So there were a lot of similar problems that I had to learn as I went along. A lot of people think, “I want to start a business, what business will I start?” or some people think, “I’m really good at making bread and I’ll sell it to my friends,” and it sort of grows organically. That’s what happened with me, which forced me to learn as I went, and I’m still doing that.

Were you scared at first?
No, I was not scared, because it was such low risk. If someone said, “OK, now you’re going to be in ten grocery stores,” I would have been really scared, or if I was going to open a scoop shop. I was just in one little store at first. I knew that if it didn’t work out I could say, “Oh well, it was a fun few weeks, but nobody likes the ice cream.”

Did you ever have to take out a loan?
No, I never did. When I started I think it cost me $1,000 and I just used some money I had in my savings account, and that’s it. From there it’s been funding itself.

When did you transition to making larger batches and how did you become popular in Chicago?
I started in 2008, almost 2009, and then I started expanding in May of 2009. In October of 2008 I was just in one location, the Green Grocer, and then the next May I started going out to other stores, and I think I was in Whole Foods by the following spring, so a year later. I didn’t even have to reach out to Whole Foods—they found me and just sent me an email. The way Whole Foods works is that each store has a certain amount of freedom to choose products that are produced locally.

How did your operation change over the years?
I was never making it at home. At first I made it out of a café called Swim Café in West Town. The owner Karen is really nice and super supportive, so she sort of charged me nothing to make the ice cream out of there, and when I outgrew that place, I moved to a bakery called TipsyCake. I shared their space, and then I moved to Logan Square Kitchen, and I’ve been there for about a year now. My current location is great—everyone is really nice and supportive, and it’s been great working there.

So is there any way Logan Square Kitchen would have an interest in helping purchase one of these expensive pasteurizers that you might have to buy?
I don’t think so, no. There are other people in my position, and it’s a scenario that could possibly happen, but the idea of all of us working in the same kitchen—everyone already pays for their own space. Black Dog Gelato, they already have a scoop shop, and it wouldn’t make sense for me to make it at their shop. It’s something we might be able to work out, but since one of the new restrictions is that I have to have my own space, instead of conforming to them, I’m more interested in fighting it.

Why was keeping your product local and organic important to you? How did you keep the price affordable, since Jessie from Black Dog wasn’t able to have a competitive price and use organic dairy?
Jessie didn’t have a store at first either. When you go to a scoop shop I think the mentality is a little different than if you buy something in the grocery store. I think if you go to a scoop shop and get a cone of ice cream you’re more willing to say, “Wow, this is really good.” If you go into a grocery store and you’ve selected an ice cream and you’re looking at the back, you’re a little more picky about ingredients and it’s something that I was aware of in the beginning. Personally I buy organic milk and meat—not everything, mostly animal products—so for my business I wanted to make something that I would buy, but I don’t know if it was the best business decision. I think just making really great ice cream by hand does Jessie just fine. No one seems to really mind that her product is not organic. 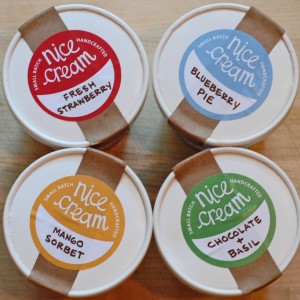 So how were you able to keep yours affordable?
I just don’t make very much money. (Laughs.) My ingredients are very expensive, and I needed to grow a lot to make money, whereas Jessie didn’t, so before we were shut down, I was in twenty-five different stores and we were poised to move into more Whole Foods stores, but I still only had two employees part-time. I was trying to keep costs low because we were putting so much money into the ingredients.

Is there a small sisterhood of ice cream makers in Chicago that meet to discuss new ideas?
No, no, we definitely don’t do that, but we’re friends. I’m friends with Jessie and I’m friends with Alison from Ruth & Phils, Snicklefritz not so much, but the other girls and I talk a lot, but more about business. We never really talk about flavor ideas.

So what’s the State of Illinois’ beef with you?
The problem is that we don’t have this machine (a $40,000+ industrial pasteurizer), but we are pasteurizing. So the milk is already pasteurized, but once we add any ingredients they require that we pasteurize it again, which we do on a stovetop in a pot, but they won’t accept that method. They want us to buy this machine, and it’s really cost prohibitive.

What was it like dealing with the shutdown and inspectors?
They were not mean. No, they just said, “This is our job,” but they were mostly dudes with a notebook and checklist. It’s like getting pulled over by a cop. They just can’t level with you, because they have to do it all day. They weren’t like, “I’m going to throw out all your stuff and stomp on it,” though.

So where’s the wiggle room?
There is wiggle room in the regulations, and this is what I’m trying to do. All pasteurization involves is bringing the base up to a certain temperature and holding it there for a period of time. So the regulation says to do that, “Or any other process that the state approves,” and that line in there is what gives me such hope! Currently, they’re treating this the same way as if I was using raw milk and not pasteurizing it on a stove. The dairy license really isn’t that expensive—it’s just all the requirements you have to meet to get it. So an attorney has agreed to work with us, but everything is moving slowly.

Why did the State of Illinois single you out first?
They said that someone had brought up my name with the State of Illinois, so there was a complaint, but it was such a weird thing to know about. I make ice cream for a living, and I didn’t even know that there was such a thing as a dairy license, so I really doubt that a regular citizen would be like, “Oh, I wonder if this ice cream maker has a dairy license, let me call and find out and put pressure on them to make them get one.” It’s a little suspicious.

Is your product unsafe?
No, not at all. We even sent it to labs to get it tested for bacteria levels and they were totally fine, and I’ve been making it for three years and it’s fucking ice cream; it’s Nice Cream!

Are you willing to bend a little to stay in business, maybe have your product tested randomly or something?
It’s not that expensive to get it tested, but that would have to be part of the deal.

What are you doing currently?
Now I’m working with senators and other representatives to create a bill that would put small-batch ice cream in a different category than huge dairy corporations.

How was your fundraiser?
The fundraiser was great! So many people came out, and I think people are really mad at what’s going on, because they want to buy it and they know it’s safe. In this country we’re even allowed to buy things that aren’t safe like cigarettes and alcohol, but in Illinois we can’t buy ice cream, because it’s not “safe.” I think what they’re trying to regulate is the opposite of the direction that the food culture is moving in; it’s just not how people want to eat anymore. When they suggested that I use strawberry syrup instead of fresh, handpicked strawberries grown locally, that’s the opposite of what people want. I’m not anti-regulation. I’m glad we can’t just sell poison in a bottle and sell it as candy to kids. I’m really glad we can’t do that, but I’m for smart regulation, obviously. I’m for relaxed regulations, but not for a big company that has much higher risk like Dean’s Dairy.

What is the next year going to look like?
I know that my job is changing from running a successful business to trying to get this regulation changed. Since this happened to us first in a really big way, I feel an obligation to fight this and try my best and use this energy to change it.

To keep up to date with Kris Swanberg and Nice Cream, visit nicecreamchicago.com. Swanberg is still selling her remaining inventory at the Green Grocer, 1402 West Grand.