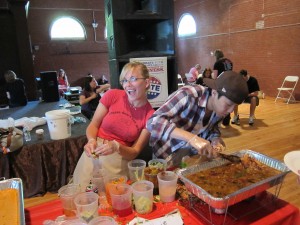 Twenty contestants, 300 pounds of bacon, one day: This is the Bacon Takedown, returning to Chicago for a second year this September. When asked what was the most creative item on the last Takedown’s menu, creator Matt Timms replies “bacon taffy” with little hesitation, but can’t choose a favorite dish. Last year’s winners included bacon English muffins and “Sow-moa” cookies, but also on the menu were bacon taffy apples and hot chocolate.

Participants receive fifteen pounds of Hormel Black Label Bacon to prepare in any way they see fit (as long as the quantity is large). After preparing the bacon, participants bring their entries to Lincoln Hall, where they are tasted and scored by both the audience and a panel of judges. Winners in both categories receive a variety of prizes—which last year included a lifetime’s supply of bacon.

Chicago’s Bacon Takedown is one stop on a national tour sponsored by Hormel. Sponsorships first helped Timms introduce the Takedown to cities like Chicago. “I tried to pick adventurous food cities and cities with burgeoning underground food scenes,” he says, and Chicago turned out to be a perfect fit.

For Timms, the Takedown is a way to remind people that a food scene exists beyond restaurants. “I love the whole sense of anybody being able to cook at these events,” he says, glad the Takedown has become such a social and welcoming gathering. “Cooking has gotten so precious, and this makes people realize they can cook for themselves.” (Erin Kelsey)

The Takedown takes place September 18 at Lincoln Hall. For tickets, information, or to enter as a participant, go to thetakedowns.com

I would like to order your September issue which contains the following article “The Bacon Takedown wants to know what todo with 15 pounds of bacon.” Can you please return my phone call at 312.596.3429. Thank you.

Support Newcity by subscribing to the magazine or donating to CIMA.
+
1
0
Would love your thoughts, please comment.x
()
x
| Reply