A disclaimer should be lodged before I begin discussing the Duke of Perth: It is a Scottish pub, and some may find it slightly audacious, maybe even a little offensive, that an English chap is making evaluations on intended Scottish cultural imitation. I am no expert on pubs in Scotland, although I have certainly frequented a few of the establishments north of the border. Regardless, the Duke of Perth has an aura akin to any given English pub, only with a much larger emphasis on men dressed in kilts and whisky.

The Duke of Perth really feels like it has been around a long time. Shelves that line the walls are stocked full of old clocks, ornate metal plates and bottles of Scotch that look like they’ve gathered a few years dust, while the wide array of wooden furniture has an appearance that suggests the current pub is not the first owner. A particularly impressive ancient wooden cabinet is used to house the ninety single malts boasted by the Duke. This edifice dominates the tiny, gracefully weathered bar. The pub is filled with the assorted paraphernalia that one expects to find in a British pub, such as the antiquated beer advertisements and painted depictions of old British gentry. A few curveballs are thrown with the inclusion of a taxidermy stag’s head above the bar wearing a British police officer’s hat and Celtic tools on the walls that provide the obligatory nod to Scotland.

What is particularly pleasing about the Duke of Perth is that it shuns the innovations of most modern bars as a television-free space with a musical soundtrack fitting to the Scottish atmosphere (if I had closed my eyes and had a fan blown in my face, I could well have been in the Highlands). The music is kept at a reasonable level, allowing the gentle murmur of the patrons’ conversation to fill the pub, instead of the usual practice of people shouting at each other as Journey obnoxiously insists that we shouldn’t stop believing. 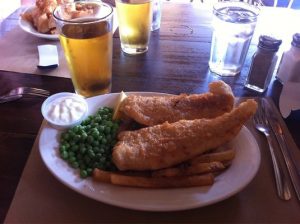 The draft selection is dominated by the wonderful Scottish brewery Belhaven. Their Twisted Thistle IPA and “Wee Heavy” beers, in particular, are a great representation of the quality of beers on the other side of the pond. The lack of Tennent’s, however, is a sorry state of affairs, as the streets of Glasgow are fueled by that substandard yet culturally dominant brand of lager. You would be hard-pressed to find a pub in Scotland’s cities not stocking the Scottish equivalent of Budweiser. The Scotch selection is also extensive, featuring an assortment that spans from Islay to Speyside and everywhere in between.

The Duke of Perth has gained notoriety for its fish and chips, which are all-you-can-eat on Fridays and Saturdays for a mere ten dollars. The dish lives up to its reputation, but the portions are so large that the idea of “all-you-can-eat” becomes slightly redundant after you reach capacity with just one plate. The rest of the menu contains a number of dishes that try to force a Scottish connection by placing the name of a place in the country before a typical Americana dish, such as the “Islay chicken sandwich.”

The Duke is a great place to go if you want to feel like you are eating a plate of fish and chips and sinking a pint in someone’s public living room; it has a homely feel that many pubs on the British Isles aspire to. The Scottish vibe is not overwhelming but provides something a little different from the pubs that base themselves on that “small county to the south of Scotland.” (Ben Small)