by Brian Hieggelke
October 5, 2011Filed under: 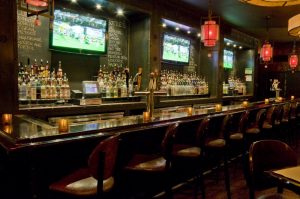 English, you say? There could not be a name for a pub that is quite so unashamedly barefaced about its intentions than one that simply names the nationality of its stylistic and inspirational forefathers. Sadly, however, this River North bar’s name is where the transatlantic connection abruptly concludes. There is absolutely nothing English about the English beyond the most banally contrived and token gestures.

For a start, the staff uniform designer seemed to miss the memo about the bar being inspirationally English. The Union Jack, the flag of the United Kingdom, not the St. George’s Cross of England, tarnishes the back of the shirts with the catchphrase “God save the cuisine” across the middle. This may be a slightly pedantic criticism—the Union Jack is certainly a more recognizable emblem than the white and red of the St. George’s Cross—yet it still comes across as rather amateur and poorly thought through.

The catchphrase itself would suggest a selection of English delicacies across the menu. However, this would sadly not be the case, as even the tried and tested “fish and chips” comes with French fries, instead of the chunky chips that are expected as an accomplice to the ever-familiar beer-battered cod. The rest of the menu could be found in any given bar in the city except for one notable exception that caught the eye of this curious Englishman immediately: “English crisps.” An “English” dish that any native of England would expect to simply be a bag of potato chips, as those are what us Brits refer to as “crisps.” What English is serving up under the banner of “English crisps” is a concoction of waffle fries, pork shoulder, cheese, cabbage, onion and sour cream. I’d walk the streets of Chicago bearing a beefeater uniform singing “God Save the Queen” if someone could demonstrate a connection between the name of the dish, its contents and the supposed English origin.

On to the beer; not one of the draft selections is a beer from outside the U.S. besides the predictable inclusion of Guinness. (Although the inept bartender proved that she had no familiarity with the methodology of pouring the “perfect” pint of the black stuff.) The selection of bottled English imports includes the staple brews but is intriguingly dominated by beers from the St. Peter’s brewery, a range of beers that is not widespread in the UK and assumedly has been developed and marketed for international drinkers, much like the lazily named Monty Python’s Holy Grail Ale, which provides an entry-level reference to English culture for the American audience. The bar is in River North, so it would be blasphemy for there not to be any craft cocktails on the menu. England is represented by the Pimm’s Cup; the atypical summer’s day indulgence for those upper-class folk who also like to root for hopeless homegrown talent at Wimbledon over a bowl of strawberries and cream. Nonetheless, the fruit-filled gin-based liqueur cocktail is undeniably (and proudly) English, and the namesake bar did a fine job of replicating it.

The décor and ambiance of English does little to endear itself to any notion of Britishness. The aesthetics of the bar are largely comprised of the exposed metal of the building’s former industrial use, which better represents the history of Chicago’s Near North Side than anything else, combined with an art deco interior. Huge, ten-foot painted portraits of antiquated figures adorn the walls, yet when asked whom they might be, the bartender responded, “Nobody, the owner just thought it looked cool.” It is that curious lack of depth that defines English. The bar serves its purpose to the swathes of River North’s young professionals, but the substance behind its ideology has been lost in translation. (Ben Small)