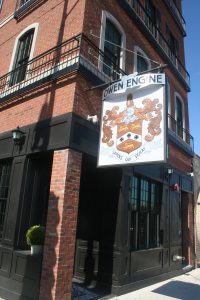 “Real ales in the engine.” Those words were a sight for my sore eyes as I gazed across the menu at Owen and Engine on an early Saturday brunch. Hand-pumped, cellar-temperature real ales in an “English” bar in Chicago. My dreams had come true. Where The Globe teased, Owen and Engine delivered, with four cask ales to choose from, all served in the imperial measurement twenty-ounce glasses and at very reasonable prices. For the first time in three months I was able to enjoy the full taste of a beer without it having the icy cold prerequisite required to enjoy. The Lagunitas Maximus IPA and Arcadia Sky High Rye both took me right back to the countryside pubs of rural Kent. Owen and Engine had me won over immediately. However, the pub, which clearly draws a huge influence from English pubs, does not actually resemble anything like any pub I have experienced in England.

Owen and Engine is a gastro-pub, through and through. The food-menu pricing and the emphasis on the quality of the food is a certain giveaway, and whilst the gastro-pub scene is thriving in England, it is never, in my experience, based around interpretations of traditional English dishes, which is the strategy of Owen and Engine. The menu features many warmly familiar items, such as pork rinds (known as pork scratchings across the pond), boiled egg and soldiers, bubble and squeak, Yorkshire pudding and Eton mess as well as the more common meals in America, like bangers and mash. They even offer a “full English” breakfast, the traditional fried, hearty breakfast of England’s working class, which has all the trimmings, including the “love it or hate it” pig’s blood delicacy of black pudding (blood sausage, as it is known in the United States).  The menu is by far the most Anglicized of any that I have come across in Chicago, and by using high-quality ingredients and intriguing techniques they have managed to keep it refreshing for an Englishman who has eaten these dishes countless times before. The delicious vinegar aioli that accompanies the house chips is a case in point: it transforms the side and provides much more texture than malt vinegar does by itself.

The pub itself is beautifully decorated and unashamedly stylish with attention to detail in everything from the rustic picture frames to the high-quality, branded hand towels in the washrooms. The textured damask wallpaper and wainscot paneling aspire to a vibe that is more city-center yuppie than old-man country pub. However, the upstairs area has a warmer, more homely quality with its armchairs, Persian-style rugs and a fireplace that conveys an elegance and established feel to the bar that is impressive, considering the young age of both the establishment and the building it occupies.

The music complements the atmosphere by being authentically British without rendering the selection to obscurity. That does mean that we’re graced with the predictable sounds of “Twist and Shout,” but who doesn’t like that song? And there’s nothing like the warbles of a miserable Morrissey to help you reach the appropriate level of British, downtrodden pessimism.

Owen and Engine takes the idea behind an authentic British pub and transforms it into something completely new. Whilst it may not be genuinely British, there aren’t many better places to go to on a cold Midwestern winter’s day to curl up in an armchair with a pint of a cask ale in hand, the smell of mulled cider filling your nostrils and a hearty gourmet interpretation of a British staple in your belly. (Ben Small)