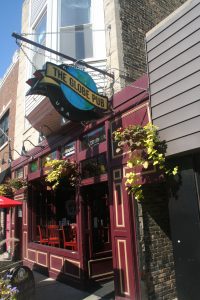 The all-inclusive nature of The Globe’s universal name suggests that its ties to being an “English” pub are not entirely fixed. The pub rather sits on the fence about it, and is probably better known as a worldly American ‘soccer bar’ than an English ‘football pub.’ Yet, if overhearing middle-aged British expats discussing social policy from their mother country over a pint of their favorite ale while a classic late-nineties soccer match entrances the rest of the patrons is your thing, then this is the place for you.

The pub certainly hints to a transatlantic link: the specials sign is adorned with the name of an obscure Yorkshire brewer, there are innumerable scarves from all-manner of English soccer teams decorating the walls and the food menu features a token number of English pub-fare items  alongside a more American selection that can be found in any pub or bar on any street in any city in the U.S. The Globe does, however, know how to tease a cask-ale-loving Brit. Gracing the left-hand side of the bar were two unassuming hand-pumps, the kind that ejects that flat, slightly warmer, most delicious kind of beer that, back home, we call ‘real ale.’ Unfortunately, the black plastic on the front of the pump that is usually embellished with a medieval comic-book style drawing of swords and dragons is blank; the pumps are nothing but dead weight there to taunt me. I’ll give them a B for trying, though.

Is The Globe an authentically British pub? The answer is a resounding no. It’s a sports bar catering for a different legion of sports fans. Is that a bad thing? Not necessarily. There are ample televisions that serve to keep you distracted from your compatriots and transfixed on the soccer action. The beer selection is second to none. (Although seeing a pint of Hobgoblin poured out of a tap rather than a pump and frosting up a pint glass is sacrilegious; there is a reason why American lagers are served at near freezing and English ales served in the fifties and that, my friends, is to mask taste, or lack thereof.) What’s more, the pub serves its purpose: the plethora of soccer matches they have on their schedule is very impressive, much better in fact than any pub in England, which are constrained by TV licensing laws. This detail alone means that I will no doubt be waking up painfully early on many Saturday mornings to make the journey down to The Globe to watch my team among the minority of other soccer fans in the U.S. (Ben Small)