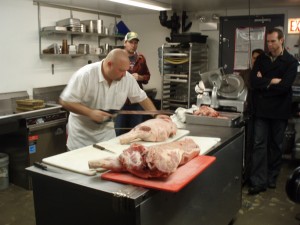 Walking into the basement of Butcher & the Burger feels like walking into any other restaurant prep area. Except for the half of a hog lying on its side on the table and the well-dressed twenty- and thirtysomethings drinking beer, wine and tea while staring in a half-stunned half-anticipatory silence. Chef Al Sternweiler positions himself behind the carcass, slapping a hand down on it as he begins to address the crowd. After a short introduction, he grabs a knife and starts slicing away at the inside of the pig. While he cuts chunks of meat off the bone, strips off long chunks of fat and mentions how the less-desirable parts are great for grinding into sausage, co-owner and designer Josh Woodward launches into a lengthy explanation of this particular pig’s origin.

This pig was raised all-natural on a farm down in Ottawa, Illinois, and it’s not technically organic since the farm is too small to be able to afford the USDA certification. Both men talk at length about the taste and size of different heritage breeds of pig, waxing poetic on the flavor of Ossabaws over Durocs.

Chef Al pulls out a handsaw and effectively quarters the side of pork as the class’ eyes grow wide at the sight of the almost comically large tool. The air hangs heavy with the iron scent of blood, but the class starts moving closer to the table, asking more questions, and getting more involved. Soon, the knife is passed around and eager hands slice their way through mounds of marble pork belly, the bacon piquing everyone’s interest. “Always keep your knife hand dry,” Chef Al reminds his students, helping them find the natural seams they can cut through.

Al and Josh move on to sanitation knowledge and the importance of temperature control, then explain the difficulties in raising their favorite breed of pig, which is a dwarf and pre-diabetic but is delicious. Josh, dressed in a flannel shirt and trucker hat, radiates excitement, even as he searches for a place to set down the chunk of spine he is holding.

The knives, still glistening with fat, are put away after Chef Al finishes cleaning the bones of the crown roast, much like a rack of lamb. With some light applause, the class moves upstairs, anticipating the promised bacon-rich salad and pork burger. Everyone’s appetite has only grown after seeing the body of the animal they were about to consume. While waiting for the food and continuing to drink, Chef Al and Josh shake hands and talk to the students, inviting them back for more classes, telling them about future plans for trips down to the farm and sharing recipes for fried pork jowls sandwiches. The burgers make their way out, on wooden slabs reminiscent of the cutting boards used for the full pig. This time, though, there’s no reticence—everyone digs right in. (Wyl Villacres)