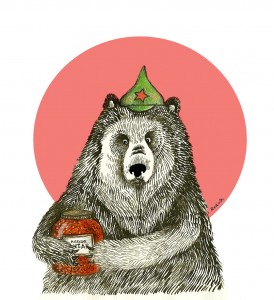 The stretch of Devon Avenue in the Rogers Park area is mostly known for its Indian stores, and my friends head there if they want to buy ingredients for tandoori chicken, a bright sari or some golden bangle bracelets. However, in the late eighties and throughout the nineties, the area was densely populated by immigrants from the Soviet Union. By now, most of them have left the neighborhood, having moved to the greener suburbs. But there are still a couple of places that are full of hidden Slavophile treasures.

One such place is a Russian supermarket named Three Sisters, after the famous Chekhov play. When I walked in there for the first time, I immediately felt at home. Not just because the place was stuffed with nesting dolls, dark bread, sour cabbage and other things that are dear to my heart, but also because the sales clerks there project a traditional Russian attitude toward clients: grimness and neglect. It’s the perfect place for misanthropes tired of the broad smiles and unavoidable enthusiasm of American customer service. At Three Sisters, you will be greeted by silence and suspicious looks, at least at first. It’s a matter of style, though; the clerks are nice and helpful once you start talking to them.

A treat I love to pick up at Three Sisters is the traditional Russian cookie prianik. The shop even carries Russian, Polish and Lithuanian variations, although my personal favorite is the Russian one, called the Tulsky Prianik—the “Tula Gingerbread.” Sold in a palm-sized rectangular brick, it has a thin sugar glazing, decorative letters arranged on top and a layer of jam or sweet condensed milk inside. The dough has honey and spices in it—a combination of cardamom, ginger and cinnamon. The texture of a well-made prianik is neither too hard nor too soft, and rather dense. My compatriots love prianiks so much we even have an entire museum dedicated to them; the Russian equivalent of “carrot and stick” is “prianik and whip,” since a prianik is the universal symbol of everything deliciously sweet and attractive.

For me, prianiks are more than just food; they bring back memories of my grandmother, who lived in a small Russian village and with whom I used to spend all my summers when I was a kid. This village had only one grocery store, where big square loaves of dark bread and packages of cheap Chinese tea were kept right next to the brown bricks of Marseille soap and extra-large cotton bras. Although the assortment of goods in this store was poor, prianiks were always there, sold by weight from a huge carton box, covered with a piece of flowery fabric to keep away the flies. They were the cheapest sweets in the store, so we had them with tea every evening. Granny would dip her prianiks in hot tea to make them softer—she was missing some teeth, and prianiks that spent months on the shelves of the village store were a bit too tough for her—while she told me the stories of her youth. Now I get my prianiks on Devon, where they are neither cheap nor tough. My American husband loves them to death and, although he has all his teeth, he too likes to dip his prianiks in tea or milk when he eats them.

I also pick up buckwheat at Three Sisters, for making into a tasty buckwheat porridge. Buckwheat is a brown triangular grain that looks like a tiny tent, and is approximately the size of a grain of rice. This gluten-free grain is not related to wheat and is rich in amino acids, zinc, iron and selenium, so if you are about to start a healthy diet, buckwheat is the way to go. American buckwheat isn’t the same as its Russian equivalent. It is processed differently, falling apart and turning into muddy gray puree as it cooks, while the Russian kind stays whole and does not lose its pleasant texture. I once learned this the hard way: I was cooking a dinner for ten, using buckwheat from Whole Foods, and instead of delicious Russian porridge I got a terrible mushy mess. My guests politely ate it, commenting that it “might be quite a healthy dish.” They never asked me to treat them to Russian cuisine again.

Pick up some Russian buckwheat on Devon, though, and it is easy to cook: Boil it just as you do with rice, add some fried carrots, mushrooms and onions, and you will be in an authentic Russian heaven. Every child in Russia grows up eating buckwheat porridge—it is just as common in my motherland as a hamburger is here. In the nineties, right after the collapse of the Soviet Union, all of a sudden the products in stores disappeared. I was too little back then to understand the term “economic crisis,” so the only thing I knew was that there was almost no food. There were potatoes, eggs, and there was buckwheat, which we ate for breakfast, lunch and dinner. We would add eggs to buckwheat, potatoes to eggs, or buckwheat to potatoes, so we always had a variety.

Before its collapse, immigrants from the Soviet Union came to Devon and the diversity of the different cultures that made up the Soviet Union are reflected in the shops; it’s not limited to Russian culture. Once you have indulged your misanthropy in Three Sisters, you can walk a few steps down the street and go into the somehow more optimistic Georgian bakery named Argo. Georgia is now an independent country, but back in the day it was a part of the Soviet Union, and Russian people still feel that Georgian culture is something very familiar and dear. This feeling is especially strong when it comes to food and wine culture, which is excellent in Georgia and throughout the Caucasian region.

In Argo you can buy all sorts of traditional Georgian pies and breads, crispy and sinfully buttery, plain or filled with meat, cheese, fruits or vegetables. They are made in-house in a traditional Georgian brick oven. You can also get various types of frozen goodies here. When I am too lazy to make my own dumplings, I just buy them frozen and boil them in hot water. Dumplings are delicious with sour cream or mayonnaise, and are eaten when they are very hot. In Russia, dumplings are often cooked for special occasions because making them is a laborious process, which usually requires the participation of the whole family. My mom would always make dumplings for the New Year dinner, and would put a little coin in the meat stuffing of one of the dumplings. The person who got the coin was supposed to have money and luck in the upcoming year. However, after my father almost broke his tooth chewing on his lucky dumpling, my mom changed her tactics, substituting coin for a piece of black bread.

If you want to try something completely decadent in Argo, move the wide-shouldered Georgian sales assistant aside and have a look at the refrigerator behind him: you will see huge jars of red (salmon roe) caviar looking back at you seductively. All my Russian friends buy their caviar here, and claim that it is a lot cheaper than in Moscow.

Walking further down the street toward Western, you will see one more remnant of the Russian immigrant culture: a bookstore with a lengthy name. The Russian American Bookstore and Art Gallery is a wonderland for those who are studying Russian and are looking for real Russian books to read. You can either buy books written entirely in Russian or get a parallel text edition, with both Russian and English texts. It also has a shelf of used Russian books, and you can always have a dig there for something unexpected: a Tatar cookbook, a trashy love novel or a Soviet edition of some forgotten writer who praises the communist way of life.

I am always overwhelmed with nostalgia when I see books published in the Soviet era, and think of the giant collection of Lenin’s writings that my parents used to have. Books were something of a treasure in Soviet times, and good books were extremely hard to buy. If you had the chance to get a book, you would buy just about anything, be it a collection of boring political speeches or a novel written by an obscure Chilean author. Unfortunately, when the Soviet Union collapsed, my parents got so disillusioned that they burned all fifty-five volumes of Lenin’s writings in the stove of their dacha, or cabin. On the bright side, they still have thirty-nine volumes of Karl Marx and Friedrich Engels.

Equipped with buckwheat, frozen dumplings and a volume of Soviet propaganda, you can officially consider yourself a little more Russian. It’s fitting that Devon Avenue is a little Russian oasis: The English “Devon” sounds exactly like the Russian word for couch. And the couch is probably the Russian people’s favorite place to spend time. Wait a second… I think the Americans quite like it, too.