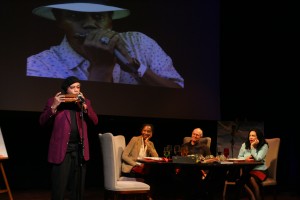 Fear No Art’s “The Dinner Party” at the Mayne Stage Theatre is a meshing of theater, art and a tasting event—all rolled into a delicious dinner party. Three artists stand on stage with the event organizer who moderates as the artists and audience partake–in the food and conversation, at least via Twitter. The event is streamed live, so anyone can participate on Twitter.

Event organizer Elysabeth Alfano’s impetus for creating the event was a dinner party she hosted a year ago for ten artists. The conversations were so evocative and stimulating that she wanted to replicate it for more than just a small group of people. Alfano curates her guests, choosing three artists who don’t know each other but have something in common.

Each Dinner Party partners with a different restaurant; this night, the third Dinner Party to date, the restaurant is Three Aces. Servers come up ninja style, taking drink orders and disappearing without interrupting the show. The evening opens with electric violin music by Edith Yokley. A painter stands in front of a blank canvas, beginning to paint in rhythm with the music. Swaying to the beat, the artist starts painting, inspired by the music coming from the violin. The painting blooms, fire on the bottom and soft vines on the outsides. Servers slip between guests’ tables as the opening act wraps up, setting down the appetizer portion of the tasting meal—gnocchi in a brown butter, sage and balsamic vinegar sauce. 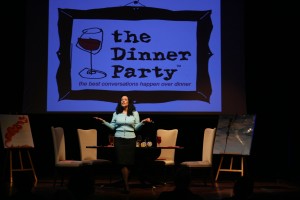 Alfano steps onstage and welcomes the artists to the dinner party: Poetry Slam founder Marc Smith, legendary blues musician Billy Branch and MCA curator Naomi Beckwith. They take their seats and are served appetizers; meanwhile, a video plays. In it, Three Aces chef Matt Troost explains to the guests what we are eating—and how to make the dish ourselves.

Then, conversation begins in earnest. Alfano explains she chose the trio because they are all involved in reaching out and teaching the community about art. Smith, Branch and Beckwith discuss their interest in making sure art isn’t just for the privileged as Alfano monitors Twitter on her smartphone, selecting questions for the artists to answer. It can be distracting to watch Alfano on her phone on stage, but the payoff is worth it—the questions she picks are insightful.

The artists—apparently spontaneously—erupt into performances throughout. Realizing that some audience members didn’t know what slam poetry is, Smith launches into one of his poems, hopping off the stage and walking amongst the audience.

After the show, Branch says it’s a great experience, unlike one he’d ever had before—despite decades of being on stage. “It was very enjoyable partially because of the novelty of the format. I’ve been in probably every performance situation imaginable. This was a first,” says Branch.

As the performance wraps up, Matt Troost reappears on the screen and describes the dinner tasting meal, which is served buffet style—long lines and all. As guests plate up, Alfano encouraged attendees and artists to mingle.  As they do, the event becomes a full-fledged dinner party. (Caylie Sadin)

The Dinner Party is held the last Monday of every month at the Mayne Stage, 1328 West Morse at 7pm. Tickets are $25. Visit maynestage.com for upcoming shows and ticket information and catch it live at fearnoart.tv.