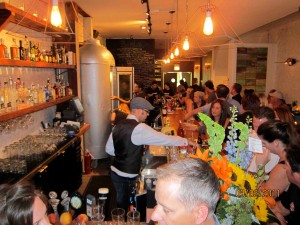 A half-hour after opening on a Sunday, every seat in Farmhouse tavern is filled and general manager Rob Diaz was amazed by the turnout. “I never, in my wildest dreams, expected it to be this busy,” he says. “We’ve sold more beer today than we’ve ever sold. We’re gonna have our biggest Sunday of all time.”

The reason for the packed house? The third annual Chicago Craft Beer Week and the wrestler Randall Poffo, better known as ”Macho Man” Randy Savage. The event was Diaz’s idea. He wanted to celebrate craft beer, and when he realized Sunday would be the one-year anniversary of Macho Man’s death, he knew he had to put something together.

“The craft-beer community can, like myself, be a little bit nerdy at times,” he says. “We can be goofy and whimsical. We name beers Morning Wood and Raucho Man Randy Beverage. I thought, what else would complement Craft Beer Week better than professional wrestling?”

Nothing, evidently. It is standing-room-only on the first floor of the restaurant and bar. Posters are taped up all around Farmhouse tavern showing a smiling Macho Man—who died from a heart attack—dressed in his signature black, red and gold-fringed outfit, sunglasses on.

Up on the second floor, one patron lifts his beer and says, “I’m here to support Craft Beer Week and pay tribute to Macho Man. I think he’d be happy with us drinking to his memory.”

On both floors of the restaurant, Macho Man highlights play on a half-dozen televisions hung over the heads of customers. On the screens, a match from the late eighties shows a bare-chested Hulk Hogan leaning over ropes to yell at Macho Man, each in their signature costumes. Laughter rises over the rumble of conversations when Andre the Giant appears, picks up Hogan, and tosses him from the ring.

At six o’clock, everyone takes a break from enjoying their dark ales and specialty brews for a minute of silence. Next, the employees lead the entire restaurant in a countdown to a ceremonial Slim Jim moment in remembrance of Macho Man and the iconic commercials he made. On the count of ten, everyone takes a bite of their Slim Jim and growls, “Oohh, yeahh!”

“At the end of the day, it was fun. Everybody had smiles on their faces,” Diaz says. “I think that’s what Craft Beer Week’s about.” (Nikki Dolson)