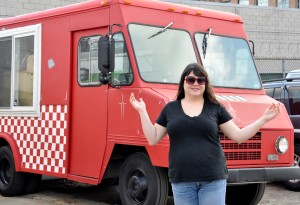 Every morning, Wilcox rises and goes to the Kitchen Chicago shared commercial kitchen on the West Side. She maps out her menu ideas the day before, choosing about six varieties from dozens of options that rotate daily. Since she began a food-truck business with her pancakes in March, she has come up with nearly eighty recipes.

Wilcox never had a particular fascination with flapjacks; in fact, her idea sprang from how boring she found them. “I don’t really like regular old-fashioned pancakes that much, which is part of the reason I started playing around with the recipe to make it something new and different. I am excited about doing something with pancakes that has never been done before. Plain buttermilk pancakes to me are just a little bit boring and way too filling. Since my pancakes are relatively small, about three inches in diameter, and a stack of three in each, you can get the delicious flavor without going into carb overload, and you can try a couple of them without feeling too stuffed,” she says.

As Wilcox serves a stack of bubblegum pancakes to a customer, she turns and says, “That is the most bizarre pancake I’ve probably ever made, and I didn’t even expect it to turn out good, but it is actually really light and airy and yummy.”

Wilcox, who started out with a food blog before starting her business, began cooking because she loved to throw parties. “Cooking for me just grew out of my creativity and love of entertaining. If you’re going to have people over, you have to have something to offer them, so I just started playing around with recipes until I began to be able to create my own,” says Wilcox. 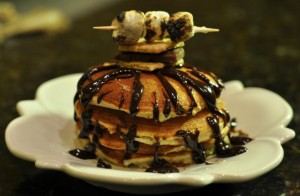 Wilcox’s blog includes not only recipes but also party-planning ideas. “I love to entertain and throw elaborate parties. I’ve planned everything from an Alice in Wonderland tea party to an Oktoberfest party, and love to do the whole thing: decorating, costumes, themed menu. It gets a little insane,” Wilcox laughs.

When Wilcox began her food-truck business, cooking on board was illegal, so most of her pancakes are served cold or room temperature. The only exceptions to this rule are the vegan pancakes she created, which don’t have to be refrigerated since there are no eggs. She puts those directly into the refrigerator instead. “There are also some warm ones, which are the savory ones, and those go right into a food warmer on my truck,” Wilcox says.

Getting the food truck and her license was not an easy process. “You have to be prepared to get the runaround from the city, who seem to be more intent on stopping business owners from being able to operate than helping them. The person who laughed at my idea first was a city official, so really I was just hurt and confused. I realized that I made a really spontaneous leap of faith with the truck, but luckily it all seems to be working out,” Wilcox says. (Desiree Cole)