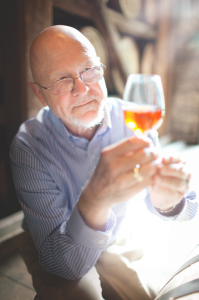 “It’s nice being the prettiest girl at the dance,” laughs Wes Henderson. The day is excruciatingly hot, but we’re secreted underground in the new River North speakeasy-style bar and restaurant Untitled—as safe from the heat as we would have been from the cops almost a hundred years ago. Henderson isn’t talking about a new dress, but Angel’s Envy, the craft bourbon he produces with his father, master distiller Lincoln Henderson, and his son Kyle.

“We wanted to do something different,” explains Lincoln. The elder Henderson spent four decades at the distilling giant Brown-Forman, which produces Jack Daniel’s, among other brands. As Lincoln knows well, the industry standard for bourbon has always held that “a bourbon had to be very robust. When I say robust, that means it had to have a lot of wood in it.”

For too many people, “bourbon was just something with a little too much astringency, and they would say that it sort of bites—especially women. So when we started this project, I said, well let’s just go for something that’s very subtle, very light.” Out of that impulse was born the idea to age the bourbon in port casks, an unusual choice that gives Angel’s Envy a subtle, smooth flavor. Marrying the two spirits makes Angel’s Envy, according to Wes, both “one of the more complex,” and one of the “most accessible bourbons on the market.” Accessible it certainly is. Wine Enthusiast Magazine gave Angel’s Envy a ninety-eight-point rating.

What the Hendersons are doing with Angel’s Envy, though, is not just about a new flavor. Their project fits into a burgeoning craft distillery movement, which Wes likens to the early stages of the craft brewing movement. The consumer base for craft spirits is growing, and people are looking for more complex, unique flavors than what large distilleries produce. Asked about other independent distillers he admires, Wes lists Chicago’s Koval Distillery, High West Distillery of Utah, Whistlepig Rye in Vermont and Templeton Rye in Iowa.

Like Templeton, which makes its bourbon from a Prohibition-era recipe, the boys of Angel’s Envy are looking to reach back into the roots of bourbon distilling. The Hendersons are in the midst of opening a new facility in Louisville, Kentucky, the historic heart of bourbon distilling. As Wes explains, most people incorrectly think bourbon was always made in rural distilleries: “The center of bourbon was downtown Louisville.” Louisville became the center of the bourbon industry thanks to its location at the Falls of the Ohio River, minor rapids just big enough to be unpassable with freight. Everything had to be unloaded, carried around the falls and reloaded below them. At this locus, bourbon was born.

Angel’s Envy is still in its first expression. Going forward, the Hendersons hope to experiment with pre-Prohibition recipes. Wes explains, “there is a difference in whiskeys, in bourbons from before Prohibition. There’s no doubt about it. The production methods were a little bit different, they were a little bit less focused on economics, and more focused on exactly what made good bourbon.”

Making good bourbon with character is exactly the spirit of Angel’s Envy, evident in Wes’ comments about how to drink it. He advises: “Drink what you like, you know? People ask me all the time, how should I drink Angel’s Envy? You know, I’m like, drink it the way you like it. Just drink it.” (Alli Carlisle)