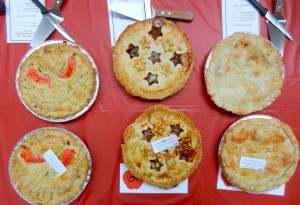 If a global bacon shortage strikes in 2013 and your favorite pig product goes scarce, now you know where to find your emergency fix: the annual Bucktown Apple Pie Contest.

The competition, which celebrated its eighth year on a recent Sunday, is the largest apple-pie contest in the country. Put on as a fundraiser by the Friends of Holstein Park neighborhood organization, it’s also home to pies with plenty of creative license. Bacon showed up in multiple entries, and past ingredients have included bourbon, basil, pine nuts, maple syrup, cheddar cheese and even a crust with a henna ink drawing topping off the flakes. The contest rules weren’t always so open-minded—bacon was originally outlawed—but now the only limitations are a top and bottom crust, no uncooked eggs, and no other fruit.

“Other than that, it’s pretty much up to your interpretation what an apple pie is,” says Michelle Pennington, the president of Friends of Holstein Park.

Baking an apple pie might sound like the simplest American tradition, but Bucktown bakers don’t mess around. Contestants were required to submit two identical pies, one to be judged on aesthetics, the other on taste. Twenty-eight judges sampled more than 140 pies, and a panel of Chicago culinary celebrities, including “Check, Please!” host Alpana Singh and Paula Haney of the Hoosier Mama Pie Company, helped pick the winner.

“I think people are getting more creative with out-of-the-box ingredients to make theirs stand out a little more,” says Meggan Christensen, a third-year contestant whose maple syrup and pecan update to her grandmother’s classic recipe landed her in the finals last year.

Or they were just bored, like first-timer Shannon Grilli.

“I love pie, but apple pie is not my favorite thing in the world,” says Grilli, who baked a maple-sugar apple pie with a cheddar-cheese leaf crust. “I had to make it more exciting.”

Even if contestants don’t care about winning, they still take the pies very seriously. Grilli tinkered with recipes and made several practice pies before deciding on her recipe. One contestant’s wife gave birth to their baby the night before, but he still dropped off his pies the morning of with plenty of time to spare. The year before, another contestant had to sprint down the block to submit her pie entries before the contest closed.

Kristin Lee, who turned in a pie with a lime and thyme crust, even built up a Twitter rivalry with other bakers she knows in the competition. They call it the Clash of the Pie Tins, but don’t worry, it’s all in good fun—they drove her to the event to drop off her pies.

“This is one of my favorite events in all of Chicago,” Lee says. “Most of my year is based on the excitement of this day.”