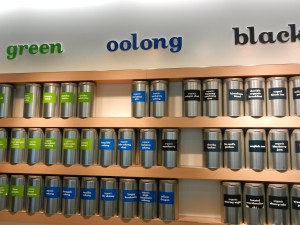 You can stop in for a cup at the new DAVIDsTEA shop in Bucktown, but the Canadian loose-leaf tea retailer would rather infiltrate your kitchen cabinets. It’s already infiltrating Chicago: The Bucktown location opened earlier this month, and new stores in Lincoln Park and Lakeview are slated for later this fall.

“Tea is amazing at nighttime, it’s amazing to share with friends, and it’s also great in the morning and in the afternoon,” says co-founder David Segal. “Because it fits into people’s lifestyle so well, people have been waiting for something like this for a while.”

DAVIDsTEA hasn’t waited too long to cross the border. Founded in 2008, the company opened its first United States stores in New York last year, and it touched down in San Francisco this past summer. The Chicago openings lead the pack of other expansions across the country, and the company expects to open its one-hundredth store by the end of the year. Chicago is no stranger to tea companies–Argo Tea launched in Lincoln Park in 2003–but DAVIDsTEA focuses on a luxe home-sipping experience.

“We’re just building a new industry together,” says Kim Wiseman, DAVIDsTEA’s head of operations, on the store’s opening day. “I think we’re on the brink of a tea revolution. The main focus on our business is for people to change their lifestyle and bring loose-leaf tea home with them, to take five minutes a day to make a cup of tea and relax.”

That little moment of bliss is what hooked Nicole Mourino, a Wicker Park-based painter and arts administrator who frequented DAVIDsTEA when she lived in New York.

“I love that their tea is made with ingredients I’m really familiar with,” says twenty-four-year-old Mourino while clutching a cup of the Coco Chai Rooibos. “I can lift this up and you would instantly know what’s in this without even knowing what it is as a DAVIDsTEA virgin.”

Snappy flavors with equally snappy names are the main bag at DAVIDsTEA. Some of the offerings are classics, like the traditional Chinese oolongs and the caffeine-free South African rooibos teas. Others are not: The Birthday Cake tea employs actual sprinkles, and the description of the chocolate-infused Read My Lips black tea calls it “better than dessert, more reliable than sex.”

“We always really imagined a variety of flavors and tastes and an environment where people could engage with the product and explore their senses,” Segal says.

“We’re demystifying tea,” Wiseman says. “If you walk in and look at the wall, it can be really intimidating. Our job is to break it down and show you how easy it is to make.” (Nolan Feeney)