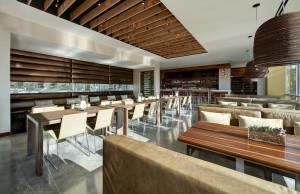 For foodies who can’t decide where to dine, Dishcrawl makes eating out easy by skipping the selection process altogether. Like a pub crawl for food, Dishcrawl organizes a walking tour of four different restaurants for a $39 edible adventure you don’t have to plan. The Wicker Park crawl kicks off at sustainable eatery Prasino on November 7, and another crawl goes downtown to explore the Loop on November 13.

1. It’s a hit elsewhere. Already established in dozens of cities across the country and Canada, Dishcrawl is ready to give Chicago some love after a test run this past April. “In the Bay Area, where [Dishcrawls] are happening all the time, they’re getting mostly food lovers, but also twenty- and thirty-somethings who want to try something new,” says Tessa McLean, one of Dishcrawl’s two Chicago ambassadors. “Food has become so important in Chicago, it really is a food town.”

2. It’s not your average menu. Dishcrawlers are gastronomical guinea pigs for chefs looking to put a spin on the restaurant’s staples or experiment with new ideas. “Generally restaurants do a tasting platter, but it’s definitely up to the restaurant,” McLean says. “We encourage them to think above and beyond or outside the box.” For Prasino, that means testing out new seasonal dishes. “Because we’re launching a new menu in November, we’re going to take some inspirations off our own menu,” says Lauren Zeien, Prasino’s director of marketing.

3. You meet the people behind the menu. At each of the four stops, chefs or owners speak to Dishcrawlers about the offerings and the restaurant’s philosophy. “We make sure that the Dishcrawlers have a deeper connection with the restaurant other than the food they’re eating,” McLean says. But that face time goes both ways: Dishcrawl serves as a mini focus group for restaurants looking to understand their clientele. “We like to know who we’re serving and how we can better serve them,” says Zeien. “[Wicker Park] is a very diverse neighborhood, and we get to know why they’re coming. It’s essentially a research project for us as well.”

4. You’re in good hands. Dishcrawl prefers to keep most of its itinerary under wraps until a few days before the crawl, but careful culinary planning–and local expertise–goes into coordinating fare for the evening. “You don’t want to go to the same places that have the same thing, [and] not all restaurants are designed for Dishcrawlers to come in the middle of dinner,” McLean says. “I couldn’t be in a position like this if I didn’t know anything about the food scene in Chicago.” (Nolan Feeney)