by Brian Hieggelke
November 23, 2012Filed under: 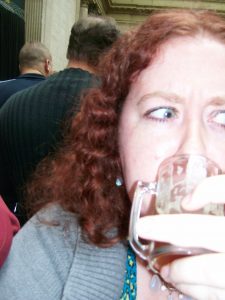 Sarah Stegeman started beer blogging to save her marriage.

She and her husband were in counseling when their therapist recommended they find a hobby to enjoy together. The two settled on sampling new beers each week to keep up quality time, and before long, they had trouble keeping track of their discoveries.

So in April of last year, Stegeman started her blog, Hoppy Beer Girl, which has since evolved from a digital chronicle of date-night beer explorations to a dedicated outlet for her beer enthusiasm.

“I had looked around at other beer blogs just to get ideas, but I wasn’t really following anything,” the twenty-eight-year-old Stegeman says. “Once I started to blog, there was such a huge outreach from the beer community. I know people across the country because of our shared passion for beer.”

As Chicago experiences its own craft-beer renaissance—many local breweries are less than five years old, and more than a dozen are opening in the next few years—the online beer community has also taken on a life of its own. Now, beer-blogging women like Stegeman are a bigger part of the conversation, both across the country and here in Chicago.

“Not only is everyone looking at beer, women are becoming way more proactive by investigating beer, learning about it, getting together with women and men to talk about it,” says Ginger Johnson, the founder of Women Enjoying Beer, which supports and develops the market for female beer consumers. “Chicago has the perfect synergy to explore that culture.” 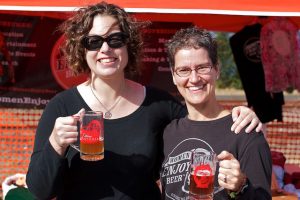 Just a month after Stegeman started her blog, Jessica Murphy took a similar plunge and started her own. Tired of waiters who automatically handed her the wine list, Murphy launched Girls Like Beer Too to combat happy-hour stereotypes and to help other women find the confidence to speak up at bars and beer tastings. As the thirty-three-year-old Murphy dived into blogging, she says something was missing, and she couldn’t quite figure out her blog’s mission.

The solution, she found, was to go light on the beer reviews and instead focus on the people behind the pale ales and pilsners. Murphy says she finds the most satisfaction in writing about the human story and history behind every brewery—she blames her graduate degrees in psychology—and she enjoys using whatever influence she has online to help up-and-coming brewers.

“I can start early and really try and support the smaller guys that are just starting out,” Murphy says.

Murphy doesn’t publish negative reviews, and Stegeman, who also writes about local beer and their brewers, similarly swore off brewery bashing in her very first post. Though both started blogging about beer to educate themselves and document their tastes, the purpose of their blogs now is less about cultivating a posse of female blog followers and more about showing love back to the beverages and brewers alike. Gender, in other words, became more of a footnote.

“Beer is great, but what’s really fantastic about craft beer is the community and the connections I’ve made and how everybody supports each other,” Murphy says. “If one person reads my blog and likes it, I’ve won.” (Nolan Feeney)