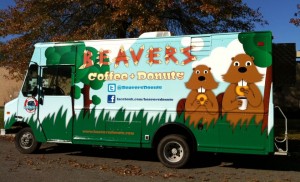 If you want to get your fix of gourmet mini donuts from Beavers Coffee & Donuts, you normally look to their website or Twitter to find the food truck’s location and hours. But once Beavers opens its first storefront restaurant in the Chicago French Market in early January, you’ll know where and when to get your hot breakfast on demand.

Since the Beavers truck opened in December of last year, requests for its catering service—and for donuts after the truck’s weekday morning-through-lunch hours—grew so rapidly that co-owners Gabriel Wiesen and Jim Nuccio started planning an expansion this summer. “Logistically, it makes sense to have a storefront in conjunction with a food truck,” Wiesen says. “Being able to facilitate those requests was really hard without a store.”

Operating a food truck makes starting a brick-and-mortar restaurant a much easier task. For starters, the idea has already been tested: Food-truck owners know what sells, know who their customers are and, when scouting for locations, know where their customer-base lives. They already are making money, and they’ve built a brand that can attract investors.

Jeff Kelley, a food-truck consultant, says not every food-truck business has their sights set on opening a permanent location, but for those committed, there is a recent trend in bringing the idea to fruition, usually within one to two years of first launching a truck. “It’s a natural progression for a lot of people: serve more people, share their vision,” Kelley says. “That’s the driving force.”

Despite the flexibility and mobility of food trucks, limitations on where they can sell, the availability of kitchen space, and what they can cook can make opening a permanent store desirable. Wiesen says the motivation to expand the Beavers menu to include more gourmet donut toppings was another factor in deciding to open the store. “The menu could very well double by the time we open,” Wiesen says.

Nicolas Ibarzabal, co-owner of food truck 5411 Empanadas, also says opening a store can improve upon a truck’s offerings. 5411 Empanadas made a similar jump earlier this year when it opened a Lakeview store in July, nearly a year and a half after the truck first started serving authentic Argentine pastries.

For Ibarzabal and his two other co-owners, opening an empanada restaurant was always the plan, but the three first decided on a food truck because it was an easier operation to get off the ground. Similarly, Wiesen and Nuccio had originally wanted to open a pizzeria in Rogers Park, but the two hit a brick wall trying to secure the needed funds.

“We were told if we didn’t have X amount of dollars, close to being a millionaire, we weren’t able to get a loan,” Wiesen says.

Food trucks have long been a way to test a culinary concept, but financially, they’re also easier first steps that allow entrepreneurs to perfect their plan until they’re ready and able to find a storefront of their own.

“The lending market is what really forced us to consider the food truck concept,” Wiesen says. “It ended up being a blessing in disguise.” (Nolan Feeney)