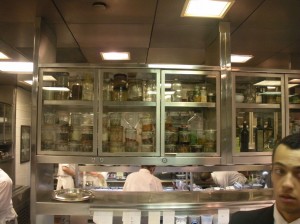 Charlie Trotter’s the restaurant is no more. The man though is very much alive. Recently, he made news by halting an auction of his restaurant-related goods after bids fell short of his expectations. He also kicked out a local reporter and photographer.

On the last weekend of Charlie Trotter’s restaurant’s existence in August my wife and I, along with some neighbors and friends, dined at his famed kitchen table. Trotter, so the legend goes, learned the art of cooking on an extended tour of Europe where no chef ever allowed him access to the kitchen. Those chefs obviously did not grasp the art of self-promotion like Trotter does.

I had imagined the night would be similar to eating in a friend’s kitchen with Charlie Trotter chopping away and regaling us with food stories while we contently munched. Instead we sat in a somewhat crowded and hot kitchen on ordinary chairs and a somewhat flimsy-feeling table. I slipped off my jacket before sitting down and it was immediately spirited away. Goblets were replenished with Perrier, utensils were politely suggested (and how does one know which of the six or so forks to use for the fish course?), and courses were introduced with a flourish. For a couple of dishes we had questions for our young waiter and he often responded by bringing the dish’s creator to us in order to better explain what was on our plate. It quickly became obvious to us that one key difference between Charlie Trotter’s and a nice neighborhood place was the sourcing. The antelope we tasted, for example, was raised on a massive ranch and then slaughtered by a sharp shooter riding a helicopter. This method ensures that the meat is not spoiled by adrenaline released by an anxious and about-to-be-killed mammal.

Trotter entered the kitchen around the same time we were served coffee. This brought about a serious change of mood that began with a hand on our waiter’s shoulder and some quiet words spoken by Chef Charlie. The waiter appeared visibly upset. Trotter then worked his way around the kitchen and randomly inspected several dishes that were being prepared. Where before the kitchen staff performed their work with a certain amount of casual grace, they now appeared anxious and almost defensive.

Eventually he came to our table. It was awkward at best with him trying to tease us for not having taken our wives to his place sooner. When I suggested he put any future endeavors on Groupon he did not laugh. The most awkward moment came when I asked him about the charitable work he has done with the Chicago Public Schools.  My fault was in how I asked him.  (“I understand that once a week you allow high school students to tour your kitchen?”)  His response entailed an over-the-top explanation that had him repeatedly looking down and rhetorically asking if he should tell us the true story.  This “reluctant” explanation was then interrupted by him giving a soft command to one of his workers. After the gentleman left to do his bidding, Charlie leaned over and, in a half whisper, stated “I do not know who I hate more, my employees or the customers.” (Noel Schecter)