by Brian Hieggelke
January 21, 2013Filed under: 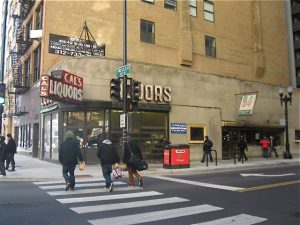 Cal’s, arguably the world’s best—or worst, depending on who’s speaking—dive bar, has closed, and not because of economic pressure, but because the owners, the brothers Cal and Fred Feirstein, are heading into their long-anticipated retirement.

Open since 1947 at the corner of Wells and Van Buren, Cal’s thrived simply because it refused to change with the times. Painted baby-shit brown on the inside, with band posters and playlists for wall art, the decor was virtually nonexistent, the bathrooms didn’t function and no matter how many times the bartender mopped the inside of the bar it managed to always look filthy. And yet, Cal’s was beloved by the chosen few who either found it quite by accident, or heard strange murmurings of its mythical existence. “Two dollar PBRs in a downtown bar?  Real punk music after dark downtown?  Cheap drinks with no attitude?  Lawyers, traders, UIC hipsters, bike messengers and postal workers drinking side by side?”

The actual existence of Cal’s was a dream come true for the class-smashing flaneur and urban adventurer.  Where else could one go to get such a particular and delicious reduction of urban society? Coming to Cal’s was like tasting a fine, long-simmering bouillabaisse: it took time and patience to cultivate the contrasting flavors that co-existed there, and it rarely got as real and flavorful as it used to get at Cal’s on a random weeknight happy hour. 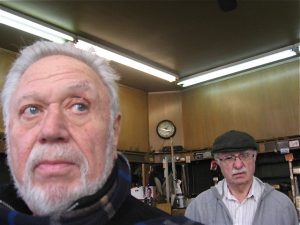 Perched like a bunion on the rim of the financial district, Cal’s was conspicuously different from its surrounding corporate neighbors, but it was just this very authenticity that mattered. Cal’s had been in the family, one family, for over fifty years by the time I found it in 2001. And it was this same unapologetic and family-owned consistency that allowed the place to bloom in the unique and lovably disheveled way that it did.

I found Cal’s by happy accident. When I first moved to Chicago, I was overwhelmed by the bombast of the great big city. Every day I would venture downtown to troll for work, and one night on one of the long walks home I just happened by Cal’s inconspicuously ramshackle storefront. I still remember the delight and intrigue I felt at finding a down-home bar in the middle of the concrete jungle. All day long I had been dropping my résumé at large, impersonal offices:  to happen upon a  business with such obvious charm and soul was a much-needed breath of fresh air.

“What is this place?” I whispered dreamily to a man standing on the sidewalk. And that man just happened to be Mike, scion of Fred, nephew to Cal and longstanding bartender and talent booker for the in-your-face, barroom-floor main stage. Two weeks later my ex-boyfriend’s band was booked and playing to a boisterous crowd of alcoholic traders, bike messengers and in-the-know urban hipsters. And thus began my long and storied love affair with Cal’s. 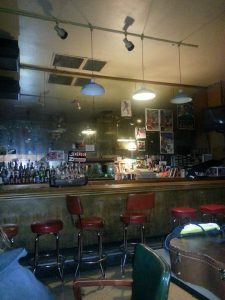 But in addition to being a downtown anomaly and commuter package store, Cal’s had another asset going for it, and that asset was Mike. Smart, political, artistic and engaged, Mike cultivated an atmosphere of creative permissiveness that attracted not a few eccentric geniuses to his venue. Underground playwrights, writers, artists and musicians graced the ragged bar stools on any given night. On the weekends, punk rock, folk and pop bands from all over the country roared their mighty roars to the abandoned outskirts of the massive city.

I used to make it a point to drop by Cal’s on what I termed “Superstar Thursdays.” Those were the days that Kennedy from the Thin Man was delivering the Reader and the now Los Angeles-based songwriter Keith Sommerer of the band “Deep Steps” and the Seattle-based copywriter Ken Polson of some band I can’t remember would be stopping by later for happy hour.

Back then we all drank PBR, talked shit about Bush II and developed the story arcs for our brilliant reality shows, “Who wants to be a Transvestite” or “Who Wants to Date my Sister—from Prison.” This was also the era of Sean and then John, the two homeless guys that Mike hired to clean up the bar.  And then there was Scott, Nick, Little Isaac, Izzy, Big Paul, Ray and the notoriously talented Andrea—A is for Evil—of “Camero Rouge.” 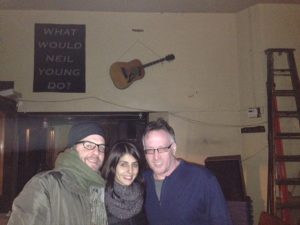 Mike, on the right, with friends at Cal’s

It was also during this same era that someone hatched the “Cal’s Disaster Plan”: the in-the-event-of-a-Chicago-terrorist-attack, we’ll-all-just-meet-at-Cal’s plan. (A plan that eerily presaged the recently foiled plot by a hapless urban teenager to actually blow up Cal’s.)

Bike messengers, notoriously socially marginal and free, thronged to Cal’s in vast numbers because of the cheap, downtown-based access to PBR, and then later on, because Mike himself was an aficionado of biking. And herein lies the actual Cal’s secret: Mike himself single-handedly took the package store and bar conceit  to a new level. He made Cal’s his private clubhouse and then he invited all of us—bike messengers, artists, musicians, hipsters, day-traders, commuters, students, homeless people—to come on in and play.  And that’s a business model that’s going to be extremely hard to replicate.

Rumor has it that discussions are in the works for opening a new bike-themed venue, and Mike has been hinting at a “Pop-Up Cal’s” making its debut sometime in 2013. For now he’s busy with his new band “Mercy, Mercy,” and let’s hope that Cal and Fred are finding peace out there in the wilds of their much-deserved retirements. 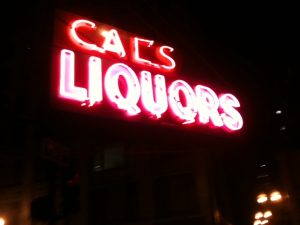 In the passing of such a great good friend and cultural institution, we realize that we are both bereaved and blessed by its former existence, and that perhaps in the future we can aspire in our own lives to recreate the delightful authenticity and tolerance that thrived so easily on the corner of Wells and Van Buren in a dirty little juke joint and package store we all called Cal’s.