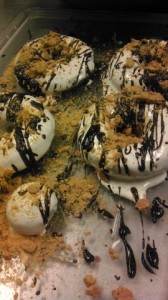 By Matt Kirouac
Who would have thought that Homer Simpson would have been such a trendsetting foodie? Long before hordes first queued up outside Doughnut Vault, the portly yellow cartoon was scarfing doughnuts. Now it looks like he’s ahead of the trend yet again, as more and more doughnut-slingers are pairing doughnuts with booze, and if there’s one thing Homer likes as much as doughnuts, it’s the sauce. With the spate of boozy doughnut desserts around town these days, I have a feeling Homer would feel right at home in Chicago. Gone are the days when doughnuts were viewed solely as coffee companions at breakfast. Now you don’t need to sneak your flask into bakeries! From whiskey to ouzo, doughnuts are getting tipsy all over town.
Boiler Room is a bar that serves pizza and doughnuts. The only way this place could get any better is if Moe Szyslak was on staff. Soft-serve ice cream has been a menu mainstay since opening in 2010, and as the kitchen recently sought to expand their dessert offerings, they wanted something that would supplement the ice cream tastefully. The aptly named “drunkin’ donuts” are four deep-fried dough balls coated with powdered sugar and cinnamon, served with a side of Jameson soft-serve ice cream for dipping. Fried to order, the hot and cold combination, compounded with the bitter bite of the Jameson against the sweet doughnuts, strikes the perfect balance of flavor.
Siena Tavern is one of the buzziest new restaurants to descend upon Chicago, and where there’s buzz, more often than not there’s doughnuts. Helmed by swoon-worthy “Top Chef” alum Fabio Viviani, the River North restaurant is an ode to his travels through Italy. Thankfully for us, those travels included inhaling doughnuts, or bomboloni as they are called. Viviani’s version of these fluffy fritters contains whiskey-caramel, the only thing slicker than Viviani’s hair. 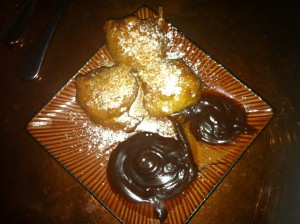 From Italy to Greece, doughnuts at Wicker Park’s Taxim are authenticated with a splash of ouzo. Natalie Zarzour, owner of Andersonville’s late Pasticceria Natalina (R.I.P.), has been chipping in on the desserts at Taxim to help out her friend, chef/owner David Schneider. She says the addition of ouzo to the doughnuts provides a subtle anise flavor and acts as a leavening agent. As the doughnuts are fried and the alcohol cooks off, it expands the dough, making them fluffier. Fluffy and boozy makes for a happy doughnut indeed. She serves them with warm spiced honey sauce.

Seeing as beignets are synonymous with New Orleans, and New Orleans is synonymous with boozy frivolity, it’s sensible that Frontier connects the dots and serves beignets with booze. Available at weekend brunch, the powdered-sugar-dusted doughnuts come with a side of rum-infused applesauce, which sounds like a naughty alternative to a lunchbox snack. 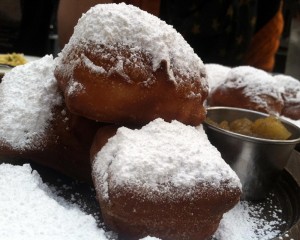 Booze and doughnuts are frequent bedfellows at Three Aces. The bar deftly combines coffee and booze with their current doughnuts, simultaneously satisfying your need for caffeine and ethanol. The doughnuts are of the cake variety, made with Dark Matter’s Unicorn Blood coffee in the batter and the glaze. They’re served with a side car of stout punch, made with Left Hand Milk Stout Nitro, condensed milk, cinnamon, nutmeg and an egg. “The stout punch is something I had a while back and always wanted to find a way to use it in a culinary sense,” says executive chef Matt Troost. His dessert philosophy is simplicity, and doughnuts are as simple and comforting as they come. But he always likes to partner the doughnuts with something else on the plate, be it stout punch, coffee, or hot chocolate. “At first I thought to go with the obvious of a little side car of coffee, but then I remembered this awesome little drink and it fit perfectly,” he says, calling the stout punch not too sweet, not too boozy, and a perfect complement to the coffee doughnuts. Coming up, Troost will be debuting s’more doughnuts, made with White Russian marshmallow fluff, chocolate and graham cracker, and a glass of milk.

Now that doughnuts have officially transcended breakfast hours, the gates are wide open for creative ingredients, pairings and glazes. It may have taken a while, but chefs are realizing that deep-fried orbs of dough are irresistible at any hour. There may not be a craving for stout punch and Jameson soft-serve with doughnuts in the morning (if there is, we won’t judge), but we’ll certainly do our best Homer impressions and scarf them down at night.
0 Comments
Inline Feedbacks
View all comments