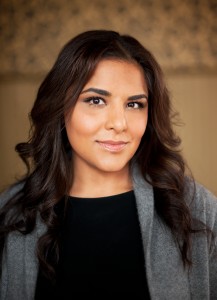 I should admit, before we proceed, that I was one of the many Chicagoans who dropped their forks in sadness when I learned Alpana Singh was leaving “Check, Please!”—the show she’s hosted for the last ten years—to open her own restaurant.

I’m a professional journalist in my mid-twenties, so you can guess what my annual income is. Suffice it to say, after rent and groceries and gas and a couple nights at the local watering hole, there’s not much left to be a serious foodie. But you didn’t have to be to love watching “Check, Please!”—alongside the four-star restaurants most of us could only dream of affording, there were BYOs and greasy spoons and food trucks much more in the financial wheelhouse of those of us making hourly.

As Singh will tell you, a big part of the show’s populist appeal were the people themselves. Each week, three random Chicagoans got together to talk about their favorite restaurants—that’s going to bring about populism the same way sitting three random movie goers down to review the latest releases at the multiplex would.

But as the knowing yet hugely accessible host, Singh granted the reviewers legitimacy. She gave meaning and weight to the criticisms and compliments the three guests each week served the restaurants. It’s one thing for three regular Chicagoans to sit around and opine about food, but it’s another thing entirely for the youngest woman to ever be a Master Sommelier and the former director of wine and spirits for Lettuce Entertain You Enterprises and all-around restaurant expert to present those opinions as valid and important and even prescient.

There are a lot of shows on television that purport to celebrate lowbrow food. “Diners, Drive-ins and Dives” is one example. But by devoting entire shows to that food, and in effect separating it from the four-star stuff, they seemingly reinforce the distinction between “high” and “low” cuisine.

Not “Check, Please!” It presented the BYOs and four-stars not as better or worse than one another, but different. It mashed them together in the same thirty-minute show. It was the ultimate demonstration of democracy—one in which personal taste and disposition was respected and embraced, and where disagreements were argued in smart, reasoned tones.

“Food is the great entity that brings us all together,” Singh says. “You can’t say that about religion or politics or a lot of things. But food in general is something you can get two strangers to discuss.”

In the first few months of running The Boarding House, the restaurant and wine bar she left the show to open, that’s a mentality she’s brought to work every day. “I find that a lot of wine bars are a little academic and intimidating,” she says. But at The Boarding House? “Just sit down and have a great time.”

Singh says that she consciously tried to attract a wide variety of clients with the wine menu, from twenty-somethings on a night out to the serious wine collector. “I was very mindful when creating the wine list to include that spectrum,” Singh says.

Singh decided to leave “Check, Please!” and open The Boarding House when she reached the twentieth anniversary of her life in the food industry. She had never considered opening a restaurant before, but realized there was nothing else she wanted to do.

“I’m a person who really likes to set that next challenge,” Singh says. “I certainly could have continued doing the show for the next ten years and been happy, but what else could I have done?

“I guess where I see myself in ten years is in the role of restaurateur.” And that’s a role that’s been different than she’s expected. “I didn’t just dip my toe in the pool, I went deep sea diving,” she jokes. “I’m a pretty good swimmer, but I just went deep sea diving.

“I thought I knew what I knew,” she adds. “Boy, I didn’t know anything.” She’s been in the restaurant industry a long time. But, she says, she didn’t fully realize all that went into it. She compares it to the difference between babysitting and having your own child. When you work for a restaurant, you care about it. But when you own a restaurant?

“It’s the sleepless nights, the stress, the feeling that you’ve never loved something more in your life and that you’d do just about anything to make sure that this child of yours is successful,” Singh says. “I’m a very different person than I was three months ago.”

And, she says, the new Alpana Singh would host the show a bit differently. “I’m much more empathetic to restaurant owners,” Singh says. “I think if I were to continue hosting the show, I might be a little more mindful when asking questions like, ‘You didn’t like it?’

“Believe me, no restaurant owner wants you to come in and have a bad time.”

Restauranting, she believes, is largely a labor of love. “There’s no good reason to open a restaurant,” she says. “It’s tough on your family life, it’s tough on your personal life, you have to give up so much of yourself. But we do it because we love it.”

Singh’s love for food came in childhood. Both her parents were in the restaurant business in Monterey, California, and she grew up watching cooking shows on PBS. “Going to restaurants always will remain a magical thing to me,” she says. “Every time I walk into a restaurant—whether it’s mine or anyone else’s—it’s just like, ‘Wow.’”

An appreciation for restaurants, in part, is what drives her to perfection in her own. “You don’t open a restaurant in Chicago without knowing that just around the corner there are five places that are going to be doing it better than I will,” she says.

“I’m very proud to live in a city like Chicago,” she says, “and I knew that when I opened my restaurant, the competition is very high.” That competition consists of high- and low-brow food, served in fancy dining rooms and food trucks. It’s a scene that’s “diverse,” Singh says, “but also comfortable.”

“I get nervous when people describe our dining room as ‘fine dining’ or ‘formal,’” Singh says. “I want people to think of it as ‘fun.’”

Here’s hoping the next host of “Check, Please!” agrees.