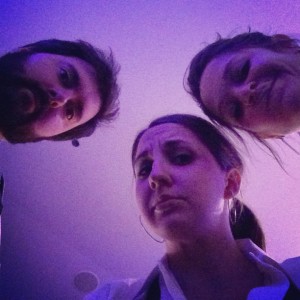 Sous chefs are the axle that keep kitchens from falling apart while going 75 mph on the highway. They’re the Abu to the chef’s Aladdin, the Piglet to their Winnie the Pooh, and the Sam to their Frodo. And we KNOW that Frodo would be stranded up shit creek without Sam. The executive chef/sous chef dynamic is a familiar one, and it’s a formula we all understand, at least to some degree. But what about those kitchens that run on two executive chefs? What happens when Sam has to cater to two Frodos? It’s an unsettling thought, but it happens, and sous chefs are forced to acclimate to this unique combination. In Chicago, the two chefs-plus-one sous chef trifecta runs smoothly (for the most part) for the likes of Sunday Dinner Club, Autre Monde Cafe & Spirits, and Trenchermen.
Amy Hoover fell under the Sunday Dinner Club spell a few years ago when she spotted a position on Craigslist. She had been in kitchens for a bit, working for the likes of Bleeding Heart Bakery (RIP), and was looking to expand her culinary repertoire. She began staging extensively in the Sunday Dinner kitchen for the underground mailing-list-only restaurant, which initially operated primarily out of co-chef Christine Cikowski’s apartment. Eventually, staging turned into a paid position, with a layover in Dishwasherville. She gradually moved up the rungs until she was cooking. Eventually, Cikowski and co-chef Joshua Kulp offered Hoover a position as their sous chef, helping them cook for their dinners and at off-site events.
On working under Cikowski and Kulp, Hoover says the dynamic can be tricky at times, especially when the two chefs wind up giving her two different sets of instructions. Having two strong personalities and opinions in the kitchen is bound to result in a snafu now and again. But when Cikowski and Kulp disagree on something, Hoover says that they wind up taking a step back, looking at the issue from another perspective, and coming up with another direction that everyone agrees on. The end result is always the best result. Hoover explains that both Cikowski and Kulp are incredibly strong chefs, and their complementary strengths are what make them such a dynamite pair. For example, Cikowski has a particular knack for desserts (Have you tried her cannoli? Do so), and Kulp is a sauce maestro. Though having two strong chefs can lead to some stresses, it can also help to alleviate stress, as they can lean on each other for support. One downside of working under two chefs: email and text message strings can get unruly.
At Autre Monde Cafe & Spirits, sous chef Matt Saccaro works under co-executive chefs Dan Pancake and Beth Partridge. As Saccaro explains, this is one place where two heads are most definitely better than one. Inevitably, there are disagreements now and again, but the duo work it out by putting decisions before the management team and seeing what the group thinks is best. Having a couple more perspectives and directions opens the doors for dishes to be better. Rather than combat each other, issues are put up for group discussion, and new ideas are tested in the kitchen. Saccaro enjoys working under Pancake and Partridge because they don’t come at him from two different directions, saying that they are professionals who know how to work together seamlessly.
Not only is Trenchermen helmed by two executive chefs, but the chefs are also brothers, which adds to the obscure dynamic in the kitchen for sous chef Rebecca LaMalfa. Having known Mike and Pat Sheerin for some time, LaMalfa was excited to get the opportunity to work with them and be a part of Trenchermen’s opening team when she moved to Chicago. She simply walked down to the restaurant one day before it opened after seeing an ad on Craigslist. Trained in French classic cuisine, working at Trenchermen is an enlightening opportunity for LaMalfa to dabble in more of the molecular side of gastronomy. As sous chef under two brothers, she says their disagreements can take on brotherly bickering in the walk-in. However, their bickering often works itself out for the best, as it forces the two bullheaded chefs to find a middle ground and ultimately come up with something better than either of them had initially envisioned. She recalls the adage that there is more than one way of skinning a cat, a sentiment that fits perfectly with the kitchen situation at Trenchermen. LaMalfa also says that each chef has different strengths, which helps prevent too much head-butting and keeps the focus on cooking.