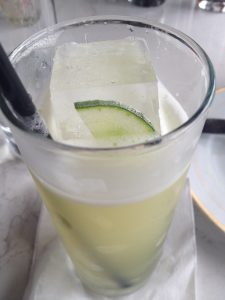 If you asked any of the employees at Scofflaw why they were still handing you a spring drink menu a week into July, they explained that the gin joint’s newest set of signature drinks were still being crafted. They’re putting a lot of thought into this one, they told you, and you nodded and accepted the explanation because even if your cocktail felt a little out of season, it’s still one of the best in town. Despite its youth and its odd location, Scofflaw’s superior drinks and reasonable prices have made it one of the most popular and lauded bars in the city. This spring, Chicago magazine deservedly called it the best bar in Chicago, a little bit of extra pressure to keep churning out delicious and innovative cocktails with each season change. Perhaps that’s why it took a little longer to get a summer menu out there. The good news: it’s done, it’s out there, and it’s delicious.

The summer menu skews tropical, cold and refreshing, and is at its best when using the holy trinity of summer spirits: gin, rum and tequila. The Sleeper is probably the most refreshing drink on this menu, a bright concoction of gin, Escorial (a dry German herbal liqueur), honeydew, lime and orange bitters, chilled with big blocks of cucumber ice. Honeydew is not my favorite melon but it sings when allowed to play with gin, somehow boosting and mellowing the juniper notes simultaneously. Also deliciously refreshing is Alfonso, a neon orange mixture of gin, mango, lime, Peychaud’s bitters and berries. Served over heaps of crushed ice, it’s bright and fruity without even edging toward overly sweet. The New Toy is essentially an updated margarita but it is a spectacular update; instead of simple syrup they use Orgeat (an almond syrup) and Mole bitters, and the salt is in the drink instead of rimming the glass. The bite of lime and tequila is unmistakably margarita, and the twist on sweetness and salt has all the charm and sparkle of, well, a new toy. 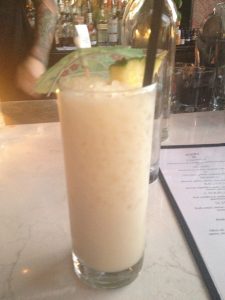 The crowning seasonal achievement for this menu, for my money, is the Pina Colada. Call it a cliché if you like, but a Pina Colada done properly is refreshing, tasty, sweet and highly intoxicating. No mixes allowed; all you need is rum, crème de coconut (the goopy stuff that comes in a can), pineapple juice and ice. Blend or shake, either way you want it frothy and freezing and in a glass. Scofflaw gets it perfectly right: the coconut and pineapple mix is sweet and tart and not overly thick, and the drink is cut through with the sharp bitterness of Flor De Cana 4 Year Gold Label Rum. All the ingredients are shaken and then served—with a wedge of pineapple and a paper umbrella—over enough crushed ice to evoke a blender without turning it into a booze slushy. Drink it with eyes closed and for a moment you’re on a beach.

There are more, and more experimental, drinks too. The Gin Old Fashioned is fantastic, if difficult to wrap your head around at first. Made just like the classic cocktail, it swaps whiskey for gin and the result is like an Old Fashioned’s reckless younger brother—a little lighter, a little bitter, a lot yummy. Punch #2 is gin and raspberry-based, bright and summery, and plays with the sweet flavors summer seems to demand without letting them go overboard. Whiskey drinkers get two choices, the Go To and the Falcon Cap. The Go To is the only drink not served over ice and I thought it was too heavy and syrupy for the season; the Falcon Cap is much better, with Ramazzotti amaro, lemon, orange, and ginger all brightening and lightening the High West Double Rye. It’s a refreshing whiskey drink, and how often can you say that? 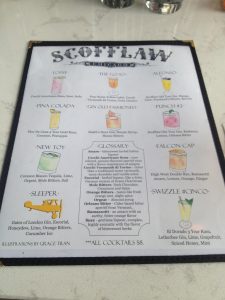 Swizzle # Cinco coaxes rum and gin into partnership with grapefruit, spiced honey and lime, and is my least-favorite of their swizzles so far, but it’s also great for someone looking for summer citrus without too much sweetness. Finally, Topsy combines Cocchi Americano Rosa, a quinine-flavored aperitif wine reminiscent of sangria, and Suze, a “gentiane liqueur” with a bittersweet herbal flavor, and then tops them with soda. It’s light so as to be almost unsubstantial and definitely serves better as a start to a meal (or any sort of snacking) than as a cocktail standing on its own.

Though imperfect, Scofflaw’s summer menu is a great success. The cocktails properly evoke a sense of the season instead of just a suspicion that they’re following a seasonal menu trend. The extra thought put into these offerings was worth it and maybe, if we’re lucky, it (and the heat) will stick around for a few weeks of Indian Summer.