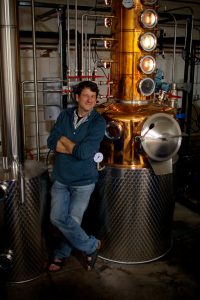 The alley air outside of a whitewashed, re-appropriated chop-shop is swollen with the warm blunt smell of grains and botanicals turned into award-winning gins and whiskeys. Inside, Paul Hletko, founder and master distiller at Few Spirits, boils the waters, more than a thousand casks after his first distillation in 2011, to make some of Chicago’s most notable artisanal spirits.

As a resident of Evanston, once the incubator for America’s infamous Woman’s Christian Temperance movement, Hletko especially understands the high threshold for success a nascent craft distiller faces no matter which city they call home. It’s as if the weather of the temperance movement, decades since past, still alters the national dew point in the way that start-up distilleries are still few in number and face high infant mortality rates. According to a survey conducted by the American Distilling Institute, approximately 208 craft distilleries currently operate nationwide as of mid-2012, a featherweight comparison to the hundreds of thousands of stills operating prior to Prohibition. “The greatest success so far is that we still have our lights on,” Hletko says. “In our business world, the first two years are the toughest, and we just hit our second year.”

And when there are currently so few licensed distilleries across the country, the addition of one more is significant. Especially when it’s right here in Evanston and coincidentally shares its name with the initials of the neighborhood’s famous suffragist and temperance reformer Frances E. Willard. “The name Few is intended to evoke that fact that we don’t make a lot, we just make…well, just a few. We are also trying to appeal to a higher level of drinker, the kind of folks that are maybe only going to have one or two drinks and so if you’re going to have a drink, we want you to make it a few,” explains Hletko. “It would be in poor taste to name a liquor brand after an Evanston elementary school.” 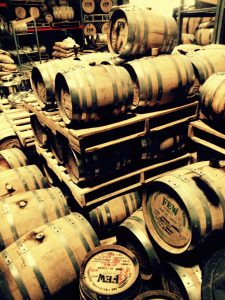 Hletko first had the idea for Few in 2008, the year his grandfather passed away. There are high-blood-brewing-content levels in the family line. A patent attorney before becoming a distiller, Hletko calls himself a “recovering lawyer,” and it’s not hard to tell that, well, his spirits are high despite the long road to recovery and the return to the family trade. The death of his grandfather, who owned Pilsner Urquell before he lost it to Hitler and his family to Nazi concentration camps, inspired Hletko to finally take the first steps to turn his idea into a reality. “When I tried to look at doing beer,” he says, “it became a question of do I try to make a pilsner beer or not make a pilsner beer. And if I make pilsner beer, I make it for the right reason, and if I don’t make it for the right reason, I don’t really want a multinational corporate behemoth patrolling what I’m doing and I still can’t figure out how to answer that question and be true to myself.”

So Spirits it is. And Hletko doesn’t want coattails or shortcuts—though he’s identified his grandfather’s brand in other interviews, he avoids naming it with me—just creativity and originality. “We don’t use essences, oils and we don’t bring in giant industrial-grade alcohol that most natural grain spirits by other distilleries use. We think that our consumer is somebody who understands that and respects that and wants to be a part of that rather than be a part of something that happens to be some giant chemical plant that is the modern distillery.” So the mission behind their cocktail is simple: Few makes a few high-quality spirits for a select few who are expected to be those who drink only a few for the sake of palate appreciation. A few all around. That math is easy enough.

The matrix of numbers, however, or the lack there of, continues to compound positively for Hletko behind those few good drinks. Limited by state law to generate a maximum of thirty-five-thousand gallons annually, he regrets that they are only able to meet about ten percent of their demand. “In Chicago, we have roughly four hundred accounts, eighty retailers, and three hundred plus on-premise accounts. We are distributed in twelve states and eight countries, including the UK and Australia,” says Hletko. That’s clearly more than a few people drinking their goods. 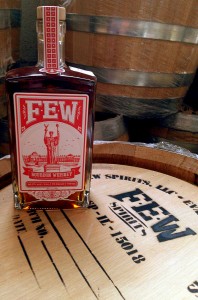 Currently, the Few operation consists of two German-made copper-jacketed pot-and-column stills—a 1,500-liter main still and a 150-liter gin pot; one mash tank that holds up to approximately 4,500 liters of grain and water; and two fermenting tanks. On the production floor, head distiller John Ferguson is tasked with making sure the super-sized chemistry set creates the taste that has, among numerous other honors, awarded their white whiskey the double gold medal at the New York World Wine and Spirits Competition. “We work really hard to make a quality product,” says Ferguson, who is so passionate about his work that he nearly wells up when talking about it. “The team we have is excellent. Everyone here could be sitting at a desk making a lot more money but we are not designed to be like that. In the past few decades, it’s kind of what has drifted out of production and we’re small so that we can focus on quality. At the end of the day, we make something. My hands are involved in every part of the process. I couldn’t be doing anything else.”

Along with that kind of passion, Few stands out for continually coming up with new recipes. “One of the requirements we are implementing in the future is that everyone on payroll is required to have two new whiskey recipes a year that they produce and barrel. So I anticipate having eighteen brand new whiskeys by the end of this year,” Hletko says. “As a small craft distillery that makes everything from grain to glass, we think it’s really important to keep on experimenting and being true to who we are. We are going to put our money where our mouth is and we are going to keep on creating.”