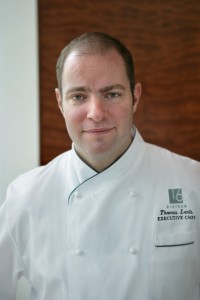 You’d be forgiven for thinking otherwise, but Next is not the only restaurant in town overhauling its entire menu and theme every three months. Every self-respecting foodie in town knows that Next recently changed its menu from a vegan theme to one inspired by the Bocuse d’Or culinary championship. However, the launch of Sixteen’s fall menu doesn’t require a mad rush to buy tickets. The dining room at the Trump might not adopt the exotic themes of Grant Achatz’s restaurant, but its ambitions are equally high. “We’re trying to redefine ourselves on a quarterly basis,” says executive chef Thomas Lents. “It’s a lot of work. It’s work I love but it’s not easy.” The seasonality of his menus is obvious, but the underlying story shifts dramatically.

Lents’ fall menu, debuting September 23, celebrates the bountiful autumn harvest. “With this menu we’re going to bring out more items that are meant to be shared,” Lents says. “I’m trying to get rid of the hegemony of the plate. The idea that it’s one plate for one diner.”

There won’t be communal tables, but Lents wants to instill a sense of communal dining among table mates. “I want that sense of passing food around the table and getting that into a fine-dining environment,” he says. For fall, the intricate table-side service of summer will segue to a more convivial dining environment. “I want to move the action off the guéridon and onto the table so the guests are interacting a little more, rather than just watching the waiter do it.”

Something Lents does exceptionally well is using food to communicate a message without being gimmicky. In his winter menu, a dawn-to-dusk interpretation of a winter day, pop rocks in a sorbet intermezzo call to mind the crackling of a fire. “Meals are more memorable because they have a story behind them,” he says. “It’s another layer of meaning you can put into a meal.” 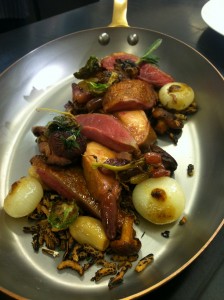 This time around, guests will still have a choice between a four, eight or twelve-course menu. “There are four moments in the meal that you’ll have choices, if you choose either the smaller or middle format menu,” Lents explains. For example, a choice between harvest from the coast or from the plains. Then, to celebrate the harvest of fruit, guests can choose between a dish focused on Normandy’s apple-producing region or Hudson Valley’s grape-producing area, accompanied by local flora and fauna. For the main protein course, commemorating the slaughter before winter, guests can either choose a medley of pork preparations in the spirit of a boucherie, or a dish representing a Pyrenees shepherd’s return to the village, comprising eleven different cuts of lamb with Basque flavors. “I love to butcher, love to work with proteins,” Lents says. He first learned the art of butchery at Thornton’s Restaurant  in Dublin, Ireland and regularly butchers whole animals at Sixteen. “The nice thing about being open for breakfast, lunch and dinner is I can literally use all of it.” Based on Lents’ last three menus, we recommend surrendering to the experience and getting the twelve-course tasting menu in its entirety. It’ll save you from having to make difficult decisions.

Unlike many fine-dining restaurants that slowly switch out courses one by one as the season evolves, Sixteen will completely flip from its summer to fall menu in just one day. “I don’t do piecemeal change because it’s impossible to maintain a cohesive context to what the story of the restaurant is,” Lents says.

According to Lents, about a month is spent fine-tuning a new menu before it is perfected. Then, as soon as the kitchen is comfortable and Lents can start giving the cooks more responsibilities, he and his management team start conceptualizing the next season’s menu. “The developmental process is two to three weeks and then we start practicing,” Lents says. “Instead of going dish by dish and putting it on the menu, we do dish by dish and put it into the logs. The month prior to a switch, we have eighty-five to ninety percent of the menu finished and it’s just a process of going through and practicing with the cooks.  The last two weeks prior to the new menu we’re putting out the new menu everyday for the staff and ourselves. We do it at least ten times before it goes on the menu. We don’t practice on customers. We practice on ourselves. We have to eat all those costs, but that’s research and development. You can never have too much staff education. With the amount of detail I try to embody the menu with, they really have to understand what’s in the dish and how it fits in the story of what we’re trying to tell.” It’s been nearly a year since Lents first conceived of the fall harvest as the theme that’s rolling out next week. 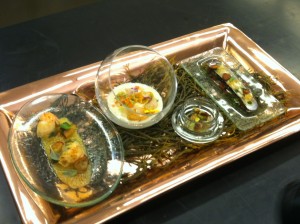 Another new addition to the fall menu is the expansion of the beverage program, so drink pairings with dinner will include more than just wine. Look for cocktails, cider and beer to make an appearance as well. “You’ll be greeted with a glass of punch and we’ll introduce ourselves to you, more like a dinner party,” Lents says. “We’ll talk about the menu before you even get to the table.”

With each of his new menus, Lents hopes to break the repetition of fine dining.  “Wine pairing, plate, cleared. Next pairing, plate, cleared. It’s too formulaic,” he says. “There’s a reason why it works, but I want to break away from the stereotypical format that fine dining has been associated with.” Instead of service à la russe, when each course is brought sequentially, think service à la française, with an impressive cornucopia of food arriving on the table at once. In the summer menu, a soft-shell crab boil course served on a copy of The Financial Times hinted at the style that will be brought to the forefront in fall.

Remembering a meal he had at Per Se in New York, Lents recalls the opulence of the ingredients and sauces and myriad of service ware. “But the best dish at Per Se was a tripe dish that wasn’t even on the menu,” he says. “All of that finery just constricts you.”

In less than two months, Michelin’s 2014 Chicago guide will be released, and Lents is clear about his Michelin ambitions. The stars have been important to him since he first became interested in cooking as a kid and last year he earned back the star Sixteen lost when Frank Brunacci left the restaurant. “I’d love to receive two Michelin stars this year,” Lents says. “Anybody who works with me knows that’s what I’m shooting for.”

Lents says that Michelin has a significant influence on business, although the difference is more perceptible in the type of clientele than the number of reservations. “The Michelin Guide attracts a much more international crowd with the expectations of a world-class meal,” he says. “Fortunately they are also usually prepared to spend, both on the food and wine, for such a meal.”

Even lunch service has been elevated significantly since Lents first took the reigns at Sixteen twenty months ago. As he trains more and more cooks at dinner, some have moved to lunch and taken their new skills with them. “I’ve invested a lot more labor hours in lunch than the hotel was doing before,” Lents says. “It was a goal this calendar year to move lunch up. There’s a market in this town and there’s a hole for true fine-dining lunch.”

Currently, Sixteen offers two, three or four courses at lunch, for $35, $46 and $57, respectively. Even those with the best intentions find it difficult to resist when the waiter wheels over a dessert cart topped with cakes and macarons. Although lunch service has improved significantly, Lents has even loftier goals. “The next step for lunch is to integrate some tasting menus and some of the ideas from dinner,” he says. When he was working at Michelin-starred restaurants in England and Ireland (The Waterside Inn and Thornton’s) serving lunch and dinner tasting menus was the norm. “You could have the same level of meal that you had for dinner that you will for lunch,” he says. “I don’t think we’ll ever completely be there [in Chicago]. Lunch will always be a little more casual than dinner but we can elevate what people expect from lunch immensely.”

After all, a restaurant must cater to its guests and the clientele from lunch to dinner changes dramatically. According to Chef Lents, breakfast is an amenity to the hotel and ninety-five percent of diners are hotel guests. At lunch, it’s a fifty-fifty split and come dinner, only ten percent of diners are staying at the Trump. Sixteen is the only Michelin-starred restaurant in Chicago serving three meals a day. Even with the constraints of working at a hotel, Lents says the Trump management has been very supportive, allowing him to take Sixteen in a new direction. “They’ve been really open,” he says. “But while I have my own personal goals for what I want the restaurant to become, it still has to be financially viable.”

On a typical Saturday night, sixteen people are working the front of the house and ten are in the kitchen serving anywhere from eighty to ninety covers. “I’m working at a hotel, so I can’t work them eighteen hours a day,” Lents says. “So that burden falls on people that can work eighteen-hour days.” He’s been in the restaurant business for twenty-five years, but shows no signs of slowing down.

“Maybe I’m not out in town as much as I should be,” Lents muses. “I don’t go out and party or hang out with other chefs. I’ve really cut my life down a little bit. I’m focused on my family and my job, producing what I want to produce in the kitchen.”