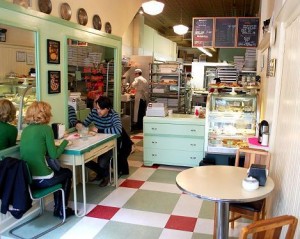 There are few things as soul-soothing as pie, which explains the adoration for Hoosier Mama Pie Co., and the chief Hoosier behind it all, Paula Haney. From coffee shops to fine dining institutions, Haney has proven her pastry prestige, but what really set her apart from the dessert posse was her decision to break away from the trendy and return to her roots making pie. Now four years in with her first pie shop, fresh off the debut of her own pie cookbook, and on the verge of opening her second shop, Haney is a true pie-oneer in Chicago.

Pie was the first thing Haney learned how to make at home in the Hoosier State. They were the go-to dessert in her family, and by the age of eight, she was making apple pie with her mom. It was love at first bite. “It was amazing how good just the apples and the cinnamon and the sugar were together,” she recalls. Although her passion for pie was there from the get-go, the road to Hoosier Mama was a long one.

Haney studied journalism at Indiana University, but wound up working at a coffee shop in Bloomington called The Runcible Spoon. She dabbled at a couple other places in town getting a taste for the baking life before moving to Chicago and working at The Hilton on Michigan Avenue. Although separating eggs for hours on end was tedious, she chocks it up as good mental exercise and practice, preparing her for her pastry-assistant position at Trio under Della Gossett. She calls the kitchen intense yet supportive, fostering growth in her pastry skills. “I was making stuff I had never made before,” she says. It was here where she felt she really learned and grew during her three years as an assistant and three as pastry chef, curating elaborate dishes using candied seaweed tuiles and foie gras as part of twenty-course tasting menus. 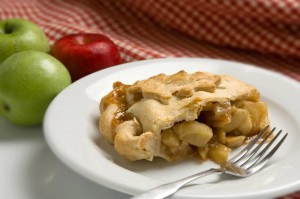 Pies are a long way from seaweed tuiles, but that’s the road Haney chose to take. “Things really came full-circle back to making pie,” she says. “I was making all these crazy desserts at work, and it’s awesome and a lot of fun, but I’m exhausted and I just want a slice of pie.” Haney and her husband Craig would banter longingly about opening a pie shop called Hoosier Mama. “We would joke about it in the way that kids would talk about running off to join the circus,” she says. In her post-Trio days, she grew tired of working for other people and finally decided to turn the joke into reality. She started working out of Kitchen Chicago and selling pies at Green City Market to establish her business, with the goal of creating a quaint little shop with just twenty pies a day. She outgrew that very quickly, having to adapt to time and space constraints to crank out high-quality pies on a consistent basis. “I like the idea of just going in and making a pie by hand. That seemed right. But we knew we had to get it efficient enough so that the shop could be designed around the timeline of making these pies.” Hoosier Mama started out with five iconic pies—apple, banana cream, chocolate cream, coconut cream and pecan—and gradually implemented new recipes throughout the seasons. “It was fun—we just started making things and taking notes and changing one thing at a time,” she recalls. But still, not every pie is a piece of cake. “We still don’t have shoofly pie. I just gave up for a while,” she says of the finicky molasses confection. Shoofly or not, Haney’s pie pantheon grew steadily until she amassed upwards of seventy pies, with ten to fifteen of those on deck every day. The only pie she constantly has, even out of season, is apple pie. “I thought that was just too much to ask of people,” she says, unwilling to disappoint customers hungry for apple pie. “There’d be riots.”

Next up for Haney was to realize her dream of writing a cookbook. For her, much of the appeal is the story behind the recipes, something she felt has been lacking in the cookbook market. Once the shop had been open long enough for her and her staff to perfect recipes, she was ready to start compiling “The Hoosier Mama Book of Pie,” which she released this summer, providing a window into her own thoughts on salt, her maple syrup purveyor in Indiana, her persimmon affection and lots more.

The ink had barely dried on her book when Haney announced the expansion of the Hoosier Mama brand, a collaboration with Dollop Coffee Company at a new space in Evanston. Although she would have liked to spend more time relishing the release of her cookbook, she was already on to the next big thing. “Things are always like that in the kitchen. It’s always about the next menu or the next deadline,” she explains. For Haney, the return to Evanston marks another full-circle career move, returning to the place where she broke into the pastry scene and made a name for herself. The new space brings a wider breadth of goods to the Hoosier Mama gamut, including sandwiches, more hand pies and breakfast pastries, a liquor license, and cheese plates, the thing she misses the most from the fine dining realm. On the cusp of opening her glistening new pie shop with Dollop’s Dan Weiss sometime in October, riding the established success of her original location and that of her new cookbook, Haney is poised to take over the world one pie at a time. Though she’d happily just settle for weekends free.