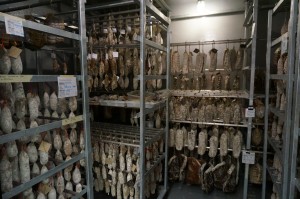 Krug salami, anyone? It may be a little early to start planning holiday parties but soon you’ll be able to get some bubbly and Krug-flavored salami from West Loop Salumi to ring in the New Year. This will be a new flavor and recipe for Greg Laketek, who opened Illinois’ only USDA-certified salumeria in July and has been doing brisk business since. West Loop Salumi is already available at restaurants and retail locations including Benny’s Chop House, G.E.B., Travelle, Lush Wine & Spirits, TWO and House of Glunz.

Laketek’s Krug-flavored salami, which will be released in December, is a project with Moët Hennessy and Plum Market, with whom he’ll also be making Numanthia Termanthia and Numanthia Termes Chorizo for a November release. Most of the salumi at Plum Market is refrigerated, but Laketek’s salumi comes straight from his West Loop drying chambers and no refrigeration is necessary. The meat is good for up to a year, “but it’s at its best straight from the chamber,” Laketek says.

As a kid, Laketek spent summer in Italy with his extended family in Centobuchi, Italy, a hundred miles east of Rome. “All their friends owned farms,” he says. “They would make their own wine, bread, pasta and salumi.” Laketek went back to study in Italy as an undergraduate, and after spending two years running his own construction consulting firm, he says he was burnt out doing something he didn’t love. In a sharp twist, Laketek attended Kendall College and decided to open a salumeria, spotting an opportunity to add something new to Chicago’s already vibrant culinary scene.

For two consecutive years, Laketek spent two months in the winter apprenticing with Massimo Spigaroli at his fifteenth-century castle outside of Parma, working twelve-hour days six days a week. Spigaroli is known as the “king of ham,” and is especially well known for his culatello, the rarest and most prized cut of salumi. Culatello is made from the large muscle in a pig’s rear leg. “It’s the best part of prosciutto, but deboned with the skin removed and aged in cellars for at least a year,” Laketek explains. He currently has a batch of sixty culatelli hanging in his drying room.

“I trussed every one by hand,” he says. Each culatello must be trussed (tied and sewn) three separate times and artfully pricked before it is hung to dry for sixteen months. “Culatello is one of the most difficult things to cure,” he says. So his brother and partner, Jesse Katzman, formerly of Avec, leaves it to the man who learned from Spigaroli himself.

“To me, it’s more than just knowing how to truss,” Laketek says. “Each step of trussing is carried out for a specific reason. For instance, the stitching must be looser on the fat side, but still tight. There can’t be vertical stitching along the main artery or else it may retain moisture. The bladder sewing has to be skin tight, or else pockets can form. The initial sewing must be immensely tight, and not fall apart during the entire process.”

The current batch of culatello won’t be ready until May 2014, but Laketek will be releasing Fiocco di Culatello, the front muscle of the prosciutto, in December. “It is much smaller than the culatello, but goes through the same process and is still very flavorful,” he says. Laketek also has nearly four pounds of black swine culatello that he purchased in 2010 from Spigaroli in Italy, which he plans to sell by the ounce.

At the salumeria, raw meat is delivered in the back alley and butchered on-site in a thirty-five-degree-Fahrenheit room. From there, salami heads to the fermentation room (sixty-eight to seventy-three degrees) while all whole muscles, including lardo, guanciale, coppa, bresaola and culatello skip fermentation for the drying room (sixty to sixty-four degrees). 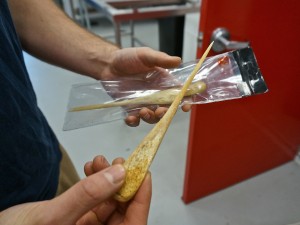 Laketek uses a horse shinbone that he brought back from Italy to test drying salumi. He plunges the bone into the meat then smells it to determine if it is curing properly. “The bone has a neutral scent,” he says. “It’s the same reason you eat caviar with a pearl spoon.”

Every detail, from the white Alba truffles Laketek hand-picked in Italy, to the farmers he has selected for his meat, is attended to with utmost care. Ironically, Laketek spends more time navigating the bureaucracy that allows him to dry-cure meat than making salumi.

“Most of our day is just filling out paperwork,” Laketek says. As the only USDA-certified salumeria in Illinois, rules for when and how they can process meat are strict and West Loop Salumi must keep a years’ worth of paperwork on site. Before he starts his day, Laketek fills out six different forms. A federal inspector visits daily and Laketek can only process meat between 6am and 2:30pm. Weekends are the only time the salumeria is open to the public, when customers can buy some salumi and enjoy it on the patio, which seats twenty-six.

“All the inspectors respect us,” Laketek says. “One just came in and bought a bunch of truffle salami. They’re really sweet and want to see us do well.” West Loop Salumi gets a new inspector every three months and their current inspector has been with the USDA for more than thirty-five years. 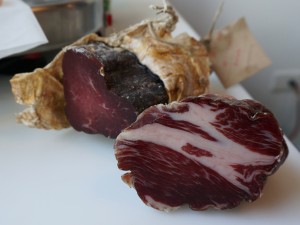 “A lot of people come because it reminds them of Italy,” Laketek says. “We’ve been really welcomed to the neighborhood.” Laketek has no plans to expand the scope of West Loop Salumi. “We don’t want to compete with J.P. Graziano’s, Publican Quality Meats or Perman Wine,” he says. Instead, Laketek just wants to make the most flavorful salumi you’ve ever tasted.