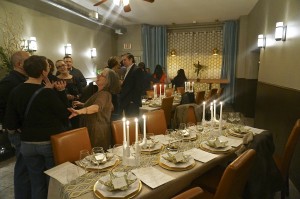 From the moment you step into the nondescript West Lawrence storefront, you know you’re in for a treat. The soulful live music, elegant plate ware and romantic lighting make it clear this isn’t any haphazard dinner hosted in somebody’s apartment. And owner Erika Stone-Miller is the quintessential hostess. Bubbly and vivacious, with a genuine love of people, she makes even the shyest guests feel at home at The Octagon Mode (Newcity’s pick for Best Underground Dinner in 2013). After greeting everyone like old friends, she’ll change from a chic black cocktail dress to an apron and bright orange Crocs. It’s time to get in the kitchen and start whipping up beef wellington and champagne jelly. Stone-Miller looks a decade younger than her forty-seven years, hasn’t owned a TV in twenty years, and her story is one of following your heart and the pursuit of happiness.

Stone-Miller attended Wellesley College, a women’s college in Massachusetts, graduating in 1988 with a bachelor’s degree in architecture. The name “The Octagon Mode” is a nod to her academic career, inspired by an obscure mid-nineteenth-century architectural movement. She’d always worked as a hostess or waitress, starting in Boston while she was in college. After school, she took an architectural job, but continued to work in restaurants and soon found that a career in architecture was not for her.  “I really liked it, but I sucked,” she readily admits. “I was never going to be a great architect.” 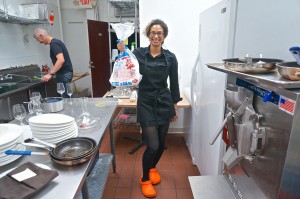 It was in Europe where Stone-Miller discovered her love of dinner parties. She had followed a boyfriend across the Atlantic and spent several years living in France and Germany. After attending many fabulous parties in various chic Parisian homes, she was inspired to entertain. “If you had an American accent people embraced you,” she says of the folks she met in Berlin. So she started inviting strangers over for dinner. “We had a swanky corporate apartment and lots of money, so that’s how I made friends. The guy that I was living with was like, ‘Who are all these people? Where did you meet them? Do you know their last names?’“

Both before and after her stint in Europe, Stone-Miller spent more than two decades working in many of Chicago’s top restaurants including Tutto Posto, Blackbird, Marché, One Sixtyblue, L2O and David Burke’s Primehouse.“I’ve never worked back of house in any professional kitchen,” she says. “They don’t make any money there. The front of the house is where the money is.” Still, she managed to spend plenty of time in the kitchen. “I’d chop vegetables, hang out on the sauté line, but not on the payroll,” she says. “I’d come in sometimes on my day off and work the entire shift. I’d just do what people told me. It was like staging everywhere. So I was in the kitchen everywhere but I never worked in the kitchen. I was never officially in the kitchen until my own gig at The Octagon Mode.”

When she left David Burke’s to start her own business, Stone-Miller’s first idea was an ice cream truck, Ice-Cubed, which has become particularly popular for private summer events. “We grew almost 300 percent from the first to second year,” she says. However, Stone-Miller wanted to do something more with the space she leases on Lawrence Avenue during winter months. At first she thought about opening an upscale modern ice cream parlor, but decided she didn’t want to run an ice cream shop during Chicago winters. Since she always loved hosting dinner parties, she thought an underground supper club would be a fun way to meet new people and keep herself busy while taking a break from Ice-Cubed. “Last year we did a couple of pop-up dinners but there was no name and the space was a mess,” she says. “This year we wanted to make it a little more organized.”

Although The Octagon Mode is only open on Fridays and Saturdays, Stone-Miller says it’s a full-time job, since she’s the only cook. “I spend at least eight hours every day on Octagon Mode even if I’m not in the kitchen,” she says. “I start in the kitchen probably on Wednesday for Friday’s service. I’ll work twelve or thirteen hours on Wednesday and Thursday, but it’s fun. I have chef friends who come in and help out too. Just put a hair net on and come in the kitchen.” 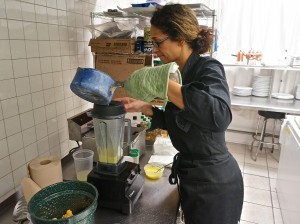 The menu changes each week, although one thing will remain throughout: her European drinking chocolate, served in copper pots. A seventy-year-old Frenchwoman she admired collected chocolate pots, and Stone-Miller followed in her footsteps and now has nine pots to her name. “I’ve stopped buying them because I want to find ones that are really really eclectic but the really nice ones are $300 to $400,” she says. The final course at The Octagon Mode consists of two different flavors of sipping chocolate, one more approachable and one a little more unique, like white chocolate with buttermilk and grits or ginger caramel.

Stone-Miller plans to keep hosting Friday and Saturday night pop-up dinners at The Octagon Mode until mid-April, when she’ll focus on Ice-Cubed again. She already has twenty-two bookings for next summer. “Everyone asks me if I want to have a restaurant or a food truck,” she says. “Why can’t I do both?”