by Brian Hieggelke
December 2, 2013Filed under: 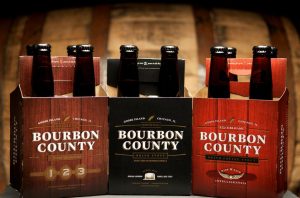 Bourbon and beer. They’re awesome, bold and delicious. Put them together, and you get something strong yet flavorful. Case in point, Goose Island’s Bourbon County Brand Stout. Released November 29, Bourbon County Brand Stout, Coffee Stout and three new additions to the BCS family (Backyard Rye, Proprietor’s and Barleywine) hit Chicago’s liquor stores where they will remain for a limited time only. Goose Island Brewmaster Brett Porter gave Newcity some insight on the craft and characteristics of the beer.

What’s the flavor profile on Bourbon County?
If you sat down with a sheet of paper and wrote down all the different flavors, you could probably fill a page with it. People taste cherry, vanilla, chocolate, coffee, people taste burnt wood… people taste hot alcohol flavors, a distinct bourbon flavor.

How long is the beer aged?
Originally, the beer was aged for a hundred days, but what we realized was the beer wasn’t picking up as much bourbon flavor as we wanted it to. We could get more if we left it in for a year.

You use “third-use barrels” for the Barleywine. What does that mean?
We made a new beer this year, Bourbon County Brand Barleywine. We second- or third-use the bourbon barrels. The reason I say second or third, it really comes down to the way you talk about how they were used. They’re third in the sense that the first fill was bourbon, the second was Bourbon County Stout (Stout), and the third was our Barleywine. There’s just enough bourbon flavor left in there to add a very pleasant character to that beer. 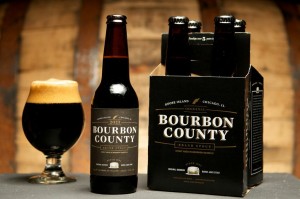 Do you have a set storage temperature for the beer?
We don’t. We let it roll, and I think that’s part of the beauty of it. The weather in Chicago, in our storage conditions, and they’re really ambient Chicago temperatures, we think that has an effect on the flavor. We know that the weather causes the wood to expand and contract, and that we’re likely seeing more interchange between the beer, the barrel, the flavor, and what’s left in the wood of the barrel. I like the weather extremes in Chicago, and I think Bourbon County likes it too. I know it does. (Ben Kramer)