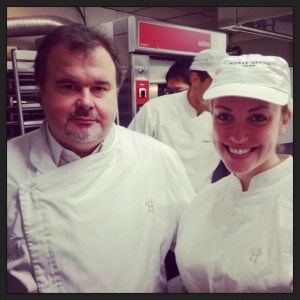 Often the best opportunities in life come from a combination of hard work and luck. Executive pastry chef Leigh Omilinsky of the Sofitel Chicago and Café des Architectes visited Paris for the first time at the end of October to stage (working an unpaid internship) with Pierre Hermé and take a class with Valrhona. She certainly earned the trip, working her way up through top Chicago kitchens including Tru and L2O before landing at the Sofitel, where she is responsible for the hotel’s entire pastry program. Last year, she won a Jean Banchet Award for Rising Pastry Chef, and this year she is a finalist for Pastry Chef of the Year. That alone might not have been enough to get her in the door with “the Picasso of pastry” though.

Luckily for her, a few of the higher ups at Sofitel North America are buddies with Hermé’s business partner and CEO of his company, Charles Znaty, so they put in a good word for Omilinsky. Four months after sending in her resume, she discovered she would be flying to France to stage with one of her idols.

“It was all out of my hands,” Omilinsky says. “Suddenly I found out tickets were purchased and I’d be gone for three weeks for a two-week stage with Pierre Hermé, and by the way they are sending me to Valrhona too.” She had four months to save up some money for the adventure of a lifetime.

“I arrived and didn’t have a schedule or anything,” she says. “As far as they’re concerned, I was just some other stage. They just told me to show up the first day at 6am.” Omilinsky prepared herself for brutal fourteen-hour workdays; after all, she was there to learn as much as she could. So she was pleasantly surprised to discover that she would have some time off.

“The French don’t give a shit who you are,” Omilinsky says. “They’re like, you’re free labor, that’s great. But they don’t work like we do. They work reasonable hours. You go and do your job and leave. They had two shifts so I got to leave at 3pm every day and I would go see pastry shops.” Her schedule allowed time to wander the city, see the Eiffel Tower, Louvre and people-watch.

“On my budget I could eat at Michelin restaurants or eat at pastry shops and buy shoes,” Omilinsky says. She chose the latter. “The chef de cuisine of Pierre Hermé printed out a three-page list of pastry shops and addresses and I think I hit eighty-five percent of them.”

Je ne sais quoi
Omilinsky notes that an attention to detail and unwillingness to take shortcuts that might compromise the final product as key differentiators in French technique. The language barrier (Omilinsky does not speak French) and sexism were challenges she overcame to successfully navigate the male-dominated kitchen. “They’re not warm and fuzzy,” she says. “They’re not mean, but it’s a challenging and really competitive kitchen. There were some similarities to L2O in that you don’t ask questions. Acne-ridden seventeen-year-olds were giving me a hard time,” Omilinsky says. One of those teens has since found her on Facebook and asked if he could stage with Omilinsky in Chicago, so it appears she proved herself to the Frenchmen. It’s not uncommon for boys to begin pastry apprenticeships as young as fourteen.

“People told me that guys drop out of school to study pastry because it was like being a rock star,” Omilinsky says. “Really only in Paris are they willing to spend that kind of money on pastries. It’s, like, eight euros for an éclair.” 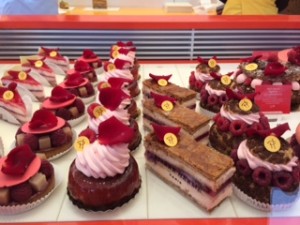 One of the highlights of her stage was spending an entire day with Pierre Hermé himself in research and development, tasting unusual macaron flavors, like foie gras fig and foie gras chocolate, as well as Ispahan, a raspberry-lychee-rose combination that Hermé is famous for. “I sat down and there were plates and coffee and everything,” she says. “They were just feeding me. They were testing new products and talking about what to tweak and looking at different packaging from China and Japan and I watched them sketch something. He [Hermé] has the nicest handwriting of anyone I’ve ever met.” After the tasting, she even helped them make some tweaks in the kitchen. Not all stages had one-on-one time with Hermé, but when the CEO is on your side, you get a little special treatment.

Bringing Paris home
Omilinsky is bringing some of the meticulous Parisian technique back to her kitchen in Chicago. “Every single shop in Paris is lined up like jewelry,” she says. “My vision is to have it [Café des Architectes] be like a Parisian bake shop. But maybe not as expensive and not quite as large portions because I want it to be approachable.” The packaging and presentation of pastries is of utmost importance, so Omilinsky plans to use a gueridon trolley at Café des Architectes to showcase sweets to guests. Instead of ordering based on written descriptions, diners can ogle her colorful selection of macarons and entremets before selecting their favorites. 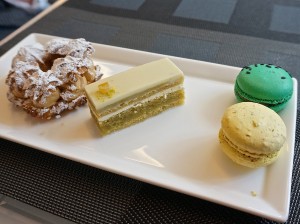 With Parisian mini desserts on the dinner menu, guests can try several of the classics Omilinsky perfected in Paris. “It’s about respecting a product from start to finish,” she says. “For example, they bake their pâte à choux every single day. It’s the same product, ingredients and method, but every single pâte à choux is treated differently. We have éclairs, gougères for savory guys, Paris Brest, cream puffs.” Each has the same basic recipe, but details like fan speed, baking and storage technique and baking the dough fresh make all the difference in the world. “It’s the same recipe, but treated differently. I’ve been in kitchens where you bake off eight sheet trays and it’s in your freezer and turns to crap.” That’s not going to fly if you work for Omilinsky.

She swears that the ingredients in France, everything from the water to milk, cream and flour, are fundamentally different. “The flour smells different,” she notes. “The color is different. It felt different.” Instead of all-purpose, cake and bread flour, the French have French, American and Italian flour. She might not be able to replicate French flour, but she can certainly make other changes. Omilinsky now uses the entire vanilla pod instead of just the seeds, and she’s adopted chocolate garnish-cutting and entremet-glazing techniques from Paris. “Everything has a French technique base to it,” she says. “Parisians like things pretty.”

Now that she’s mastered the classics, it’s time for Omilinsky to improvise and play some jazz too. “One thing they don’t really use in France is salt,” she says. “Things aren’t salty enough for me.” So in her Paris Brest, the praline filling has just enough salt to temper the nutty sweetness of the hazelnuts. And the pâte à choux? Delicate and pliable, with a light crispness on the edges.

Omilinsky learned a lot during her crash course in Parisian pastry, but perhaps more important than any culinary skills was what she learned about herself. “I’m a worrywart,” she says. “But I faced my fears in Paris. My fear of failure, of eating alone. Not knowing the language. I was completely out of my comfort zone and it forever changed me. If I can do that…” she trails off but her newfound confidence is clear. Don’t mess with her, because this woman is up for anything. 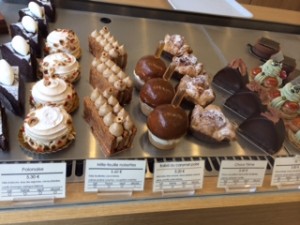 Sadaharu Aioki – for the green tea macarons and “zen” entremet

Angelina – for a Mont Blanc and hot chocolate

Des Gateaux et du Pain  – She was a Pierre Hermé prodigy. We got her baguette for staff meal every day. They have the best Viennoiserie and breads.

Words cannot express how I felt reading this article about Ms. Leigh Omilinsky, Executive Pastry Chefs’ internship in Paris with Pierre Hermè. What an honor. In one word “Impressive”… what a changing journey and to say the least, an amazing experience to be with the best. To go the France and experience the culture, differences in people, food, taste, techniques, well all of it “CULINARY SKILLS” and still have a minute to see part France. To be the best she can be and bring those delish deserts to America WOW! It certainly didn’t sound easy, as hard work never does;… Read more »