National food personalities like Andrew Zimmern have touted Filipino cuisine as an emerging  trend, but here in Chicago the scene still seems lacking. While there are several neighborhood Filipino eateries in Chicago, none have a particularly high profile. If Tanta has made Peruvian food mainstream, there’s no trendy River North equivalent for the Pacific island nation. Sunda arguably comes closest, albeit with a Pan-Asian label. However, there are more than a few chefs with Filipino heritage helming restaurants around town. Some of the creative dishes you’re chowing down on at restaurants like The Refinery, E+O, Sunda and Pecking Order have Filipino roots.

Rodelio Aglibot, one of the most prominent Filipino chefs in town, is known for his “new Asian” cuisine. He brought Filipino food into the spotlight when he opened Sunda in 2009. Now, he’s helming the kitchen at E+O in Mount Prospect, where the eclectic menu includes steak, sushi and pizza along with a few Filipino signatures.

Aglibot, who was born in the Philippines and raised in Hawaii, thinks Filipino food is often misunderstood. “People don’t understand the history with Spanish, Chinese and Malaysian influence,” he says. “There’s a natural fusion to the food already.” He cites his parents as his first culinary mentors and instructors. “They basically trained my palate,” he says. “When I start creating dishes, how do I come to the judgment of what is good or not? It’s all based on my Filipino upbringing and the food I ate.”

With signature dishes like his adobo pork belly with grilled onions and crispy pata (a confit pork shank with garlic, vinegar and his mom’s chicken-liver pâté sauce), Aglibot tries to remain authentic. “What makes Filipino food so beautiful is that it’s peasant food,” he says. “That’s why it’s so near and dear to my heart. Once you start manipulating than it loses its essence. If you start throwing luxurious items in there it begins to lose its identity.”

At Sunda, executive chef Jess DeGuzman carries on his predecessor’s Filipino torch under the Pan-Asian umbrella. Dishes like pancit canton, a dish with crispy pork belly, lap cheong sausage, shrimp, carrots and bok choy mixed with egg noodles and dressed with a lemon sauce, are nods to his heritage.

DeGuzman describes Filipino cuisine as a combination of Latin, Chinese, Malaysian and American flavors. “It has a unique intensity of flavor with a combination of sweet, sour and salty,” he says. “I have my favorite dishes made by my mom at home and I want everyone to experience what the Philippine culture has to offer. Most people are surprised the first time they try Filipino food. People really enjoy the dishes and flavors but it doesn’t register that they are eating a Filipino-inspired dish.” DeGuzman’s executive sous chef Mike Morales is Filipino as well, as is Sunda’s owner, Billy Dec, who says the adobo pork belly is his favorite dish on the menu. 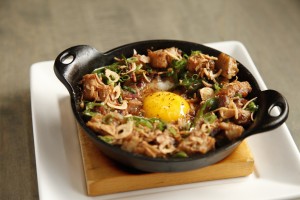 If you ask nicely, you might even have the chance to try an off-menu favorite. DeGuzman serves sisig, a Filipino comfort food, to customers in the know. The dish is made with sizzling pork belly and tripe, scallions and fried onions with a sunny-side-up egg. Break the egg and swirl the yolk in the pork before eating the savory mixture with rice. “Bizarre Foods” host Zimmern tried the dish when he was in town and loved it.

Sisig is one of Dec’s favorites too. “It’s what my uncles in the Philippines always made me eat with them when we were staying up late drinking heavy,” he says. “Dudes, San Miguel beers and sisig!”

Although E+O is an amalgamation of many cuisines, Aglibot has an underground menu as well, for Filipinos who crave traditional dishes. “I do a chicken sisig using mainly the thigh and chicken skin,” he says. “And we do an arroz caldo, once again, not on the menu.”

Aglibot embraces the opportunity to be an ambassador for Filipino food, but recognizes several challenges preventing the food from going mainstream, including health and an unfamiliarity with the Tagalog language. There can be health concerns with the Filipino diet being heavy in pork, sodium and sugar. Contrast that with the lighter, cleaner flavors in Vietnamese food or spicy Thai food that American palates love.

He also points out that wording is important when introducing new dishes to a menu. “When you think about the names of dishes in Tagalog, it doesn’t sound sexy,” Aglibot says. “Bagoong is fermented shrimp paste. If someone read that, they might be turned off.  But if I write sun-dried shrimp tapenade they’d probably be more likely to understand what it is.” However, Aglibot doesn’t think that strategically wording menus will be enough to make Filipino food the next Vietnamese or Thai.

“I love Filipino food but I don’t think it can stand alone as its own big-box restaurant,” Aglibot says. “I think there’s room in Chicago for a concept, like Filipino Fat Rice. Or Filipino barbecue dishes as a standalone concept. The foundation needs to be strong for it to grow. Otherwise it will be a fad instead of a trend. “

Aglibot points to Kristine Subido’s Pecking Order as a successful Filipino restaurant, although it’s a small one. Subido uses family recipes for chicken marinaded in garlic, vinegar and star anise, along with pinoy eggs, which are Filipino-inspired scotch eggs, wrapped with house-made longaniza sausage (Subido’s grandfather’s recipe), then breaded and fried.

It’s hard for Subido to pick a favorite dish, but she loves the marinaded then char-grilled chicken. “I enjoy eating it with garlic fried rice, sweet plantains and our collard greens which are braised with coconut milk, applewood smoked bacon and lots of ginger,” she says.

For more subtle nods to Filipino culinary heritage, take a look at what executive chef Lawrence Letrero is cooking at Old Town’s Refinery. Although he has never been to the Philippines,   Letrero’s parents are Filipino and he fondly remembers his mother’s traditional cooking growing up. At the restaurant, oxtail arancini with saffron risotto are a riff on kare kare, a stew of braised oxtail in peanut sauce. The arancini are served with bok choy and coconut peanut sauce, and Letrero dedicates the dish to his mother. “Most of our guests may not know the story behind our oxtail arancini, but to me it’s very personal and nostalgic,” he says. “Kare kare is my favorite dish my mother makes.  When I visit home my mother makes sure there is a big pot of kare kare stewing on the stove.” 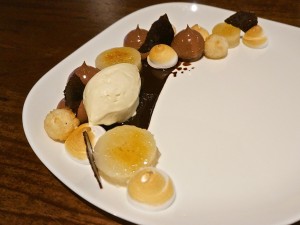 On the sweet side, Letrero taught his Dutch pastry chef, Hetty Arts, about cassava, a root vegetable used to make tapioca that can also be grated to make a cake. Arts pairs cylindrical chewy cassava cakes with coconut cassava rochers, dark chocolate cremeux, chocolate brittle and marshmallow ice cream for the richest dessert on her menu.

However, this is just the sort of ingredient-borrowing that Aglibot warns can bastardize Filipino cuisine and only confuse customers even further. “Taking an ingredient from the Philippines and putting it in a dish doesn’t make a dish Filipino,” he says.  But is it a step forward to encourage somebody to introduce diners to new flavors, ingredients and words in the hopes that one day they will understand the more complex history of a misunderstood cuisine?