by Brian Hieggelke
February 18, 2014Filed under: 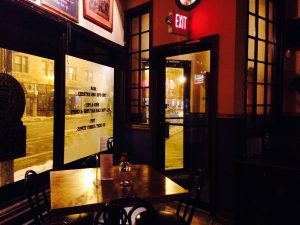 A winter bar must have two doors. They can’t be French doors, which swing open to reveal the splendor of summering in the countryside, les enfants Jean-Pierre and Gaston playing petanque in the yard as Papa scans the hills before the partridge hunt. They must instead be one in front of the other—two single doorways several feet apart, forming an enclosed vestibule. This pocket of space deadens the incoming cold. Once inside, the view looking out through the plate-glass doors is bleak by comparison. In the frosty, refracted frame there is a young man playing a futile game of “Can I eat these cheese fries with gloves on?” as he waits a frozen eternity for the Clark bus. And there are no partridges; it’s so damn cold there aren’t even pigeons. No splendor in sight, only tempered struggle.

These doors allow us to keep the elements chained up outside. We’re always aware of their existence, but for the moment we’re unencumbered, even liberate, by it. They allow us to say, “Yes, Winter, I hear/see you knocking, and no, I won’t be out until I damn well please.” And although many places have them, there is no more deliberate set of “Chicago doors” than those protecting the Duke of Perth. 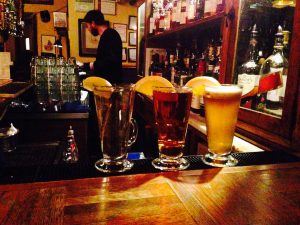 To my knowledge, the Duke is the only Scottish pub in the city, and from my corner barstool, the place is lookin’ straight outta Glasgow. I spy several Belhaven beers on tap and more single malts than you could shake a shinty stick at. The glow of the fireplace brightens the beige painted walls, similar in color to the brick of a centuries-old Scottish castle when the sun hits. There are several mounted clocks, black-and-white photos of Scots not named Sean Connery or Arthur Conan Doyle or William Wallace, and should the fire give out, a pair of wooden bellows to stoke it back to life. I imagine one could uproot the entire building in the morning, airlift it to Edinburgh and, by early evening, it would be brimming with hard-working professionals and university professors enjoying their customary post-work pint and finger. And somehow, authentically foreign as it is, a February evening at the Duke of Perth feels grounded and familiar as well.

Perhaps we can attribute this level of comfort to the ubiquitous Irish pub and to our inability to distinguish the two cultures. Lord knows I can hardly tell the difference. It seems to run deeper, though; it’s a matter of shared mentality. Visitors to the Duke of Perth, like many other people in Chicago, have little practical interest in entertaining their winter escapist fantasies. There, I said it. That tropical-themed bar with no windows and fake palm trees is not warming; it’s numbing, and I defy you to have an honest, open conversation over mai tais.

Instead of disoriented, I’m grateful to have found my way inside. With the cold parked out front, its face pressed up against the windows, I feel the welcoming heat of the hearth at my back. The young man is still outside in plain sight, still determined not to make a mess of things, as I eat my plate of chips with nimble fingers. (I can even add ketchup or malt vinegar. What a life I lead!) And as I watch him board the bus for a lonely ride home, I enjoy the company of new friends at the bar. We discuss our careers, and it’s one of the most sincere, clear-headed chats I’ve had in some time. 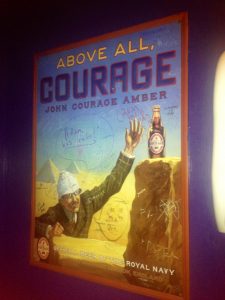 The pub narrows as I walk back toward the bathrooms, past the kitchen, a second fireplace and four friends sampling whisky flights. Above the toilet in the men’s room is an advert, a cartoon rendering of a British gentleman. Exhausted in the desert, he’s just discovered a solitary beer. “Above All, Courage,” it reads.

I bundle up, emboldened, and brace myself before exiting through the “Chicago doors.” It’s freezing and deserted, as I knew it would be, a barren wasteland. And as I walk farther through the cold, I grow more thankful for that next beer, whenever I’ll be lucky enough to find it.