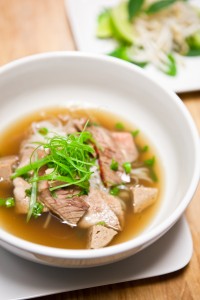 One of my earliest memories is being home from school, sick, slurping soup prepared by my Italian grandmother. As a kid, I thought this soup, pastina, was my grandmother’s invention, made especially for me. The recipe for pastina is simple: chicken broth with lots of garlic and, crucially, little pasta stars (tiny letters of the alphabet will not do!).

As I got older, I came to understand that pastina was a classic cold-flu remedy enjoyed by generations of the young and old…even non-Italians. That realization had no effect upon my belief that this soup was, beyond a doubt, magic.

As my cousin Karen used to say, “Pastina is to be eaten with Kleenex.” This soup is warm and salty, so it opens up the sinuses, relieving pressure and other cold symptoms.

My Aunt Rosemarie confirmed the power of pastina and told me she once “felt her fever break” while eating pastina. “It was very dramatic,” she added, convincingly.

Chicken broth and garlic are, of course, well-known folk cures for the common cold, but even if the pastina had no measurable curative effects, it did, at least comfort me in my illness.

I talked about comfort food with Mary Nguyen Aregoni of Saigon Sisters (567 West Lake, (312)496-0090). “First thing that comes to my mind with comfort food,” she says, “is pho. Just broth and noodles, add some meat and bean sprouts and you have a meal. I can eat it for lunch or dinner in any weather, cold or hot. It’s all in one bowl and easy to assemble. Comfort food, for me, is food I can eat every day, that’s fulfilling and tasty.”

Pho is commonly pronounced “foe,” though it is more correctly pronounced “fuh,” with a lightly rising intonation at the end, almost as though asking a question.

In Ho Chi Minh City (formerly Saigon), we’d enjoyed pho from a small market stand, and variations on the simple broth/noodle theme are, indeed, infinite. In the Vietnamese market, our pho contained the required noodles and broth but no sprouts; instead, we were served the soup strewn with raw beef and fish balls (spheres of fish paste cut in half for easy eating).

Knowing that Aregoni (her married name) is from Southeast Asia, I was curious how pho became her comfort food.

“When I was five or six in Laos,” she explains, “my dad would take me on his motorbike to eat pho for breakfast at a restaurant, or I’d eat it at a street market, sitting on a small stool. I felt like an adult eating pho with my chopsticks and putting in garnish and lime. Then in the evening around 9pm [three hours after dinner], my mom would make a small bowl of pho for us to eat before heading to bed. It definitely made us sleepy. We slept better because of the pho.”

For Aregoni, the comforting effects of pho stayed with her as she and her family traveled throughout former war zones in Southeast Asia and, eventually, to the United States.

“When we had to migrate to Thailand after the Vietnam War, we had pho from a street vendor. It made us feel safe and at home.  Coming to the US and seeing my mom cooking a pot of pho all day long, it was a comforting and familiar sight in a foreign land. 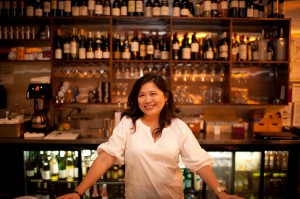 “We introduced pho at the French market when we first opened,” Aregoni says, “and we could serve it only from Monday to Wednesday because we didn’t have enough space to cook a huge pot every day. We didn’t know if people would want it, but then we started getting asked for pho every day. We ended up offering versions with beef, chicken, even bison. It’s one of the best-selling categories on our menu, especially in cold weather.”

Then Aregoni says something that will resonate with anyone who has a biographically significant comfort food. “It brings me joy,” she says, “to hear people talk about pho or order from our restaurants because I know it will bring them comfort and satisfaction, just as it has done for me all my life.”

Saigon Sisters has a third location at Northwestern Hospital, and I have to believe her guests there, whether healthy or not, find great comfort in her soup.

Next month, we talk to Nicole Pederson of Found in Evanston who remarked “The words ‘comfort food’ are out there in the food world, and you hear about places serving, for instance, ‘Southern comfort food,’ but I’ve never connected with any of that. Comfort food is different for every person.”

The following recipe from Andrea Nguyen, author and teacher (Vietworldkitchen.com), is reprinted with Ms. Nguyen’s permission. Mary Aregoni’s Saigon Sisters is referenced in Nguyen’s upcoming book, “The Bahn Mi Handbook,” and Mary tells us the following “is a classic recipe that is easy and very close to how we do it at Saigon Sisters.”

Char onion and ginger. Use an open flame on grill or gas stove. Place onions and ginger on cooking grate and let skin burn. (If using stove, turn on exhaust fan and open a window.) After about fifteen minutes, they will soften and become sweetly fragrant. Use tongs to occasionally rotate them and to grab and discard any flyaway onion skin. You do not have to blacken entire surface, just enough to slightly cook onion and ginger.

Let cool. Under warm water, remove charred onion skin; trim and discard blackened parts of root or stem ends. If ginger skin is puckered and blistered, smash ginger with flat side of knife to loosen flesh from skin. Otherwise, use sharp paring knife to remove skin, running ginger under warm water to wash off blackened bits. Set aside.

Simmer broth. Add six quarts water to pot, bring to boil over high heat, then lower flame to gently simmer. Use ladle to skim any scum that rises to surface. Add remaining broth ingredients and cook, uncovered, for one-and-a-half hours. Boneless meat should be slightly chewy but not tough. When it is cooked to your liking, remove it and place in bowl of cold water for ten minutes; this prevents the meat from drying up and turning dark as it cools. Drain the meat; cool, then refrigerate. Allow broth to continue cooking; in total, the broth should simmer three hours.

Strain the pho broth through fine strainer. If desired, remove any bits of gelatinous tendon from bones to add to your pho bowl. Store tendon with cooked beef. Discard solids.

Use ladle to skim as much fat from top of the pho broth as you like. (Cool it and refrigerate it overnight to make this task easier; reheat before continuing.) Taste and adjust flavor with additional salt, fish sauce and yellow rock sugar. The pho broth should taste slightly too strong because the noodles and other ingredients are not salted. (If you’ve gone too far, add water to dilute.) Makes about four quarts.

The key is to be organized and have everything ready to go. Thinly slice cooked meat. For best results, make sure it’s cold.

Blanch noodles. Fill three- or four-quart saucepan with water and bring to boil. For each bowl, use long-handle strainer to blanch a portion of noodles. As soon as noodles have collapsed and lost their stiffness (ten-to-twenty seconds), pull strainer from water, letting water drain back into saucepan. Empty noodles into bowls. Noodles should occupy one-quarter to one-third of bowl; the latter is for noodle lovers, while the former is for those who prize broth.

If desired, after blanching noodles, blanch bean sprouts for thirty seconds in same saucepan. They should slightly wilt but retain some crunch. Drain and add to the garnish plate.

Add other ingredients. Place slices of cooked meat, raw meat and tendon (if using) atop noodles. (If your cooked meat is not at room temperature, blanch slices for few seconds in hot water from above.) Garnish with onion, scallion and chopped cilantro. Finish with black pepper.

Ladle in broth and serve. Bring broth to rolling boil. Check seasoning. Ladle broth into each bowl, distributing hot liquid evenly so as to cook raw beef and warm other ingredients. Serve your pho with the garnish plate.