On the evening before opening day of the 2014 World Cup, something strange occurred. I was sitting at North Center’s The Globe Pub enjoying my customary Guinness. They were playing highlights from past tournaments all night long—a perfect primer for the match in Sao Paulo the following day—and I wanted all of it in me in time for kickoff. The story of 2002 Korea-Japan was coming to a close, Brazil and Germany lining up for the final in Yokohama, and memories turned visceral.

This was the first World Cup match I’d ever tuned into live, and I recalled thirteen-year-old me creeping down the stairs before sunrise to watch alone. Lord knows why. Even as the Americans dos a cero’d Mexico on their way to the last eight, I was apathetic. But for whatever reason, I risked being given a proper chiding for dozing off in church later that morning and I watched from start to finish. God’s wrath was temporary, I figured, but the wrath of Kahn (legendary German keeper and most outstanding player of 2002 Oliver Kahn, that is) would haunt me forever. He and Ronaldo (Brazil’s superstar striker and top scorer of the tournament) were the only players I’d heard of, and I still knew virtually nothing of them. I watched in puzzled silence as the bucktoothed Brazilian notched the only two goals of the match, and I tried to make sense of this story’s impossibly foreign plot, its faraway setting, and its characters, unlike me in every way.

By this point in my sporting life, I’d been through both three-peats and “Space Jam”; I’d seen Sammy Sosa demolish a McChicken sandwich in the Cubs clubhouse; I’d slogged through enough Bears’ quarterback turnovers to make the HR folks at Groupon say “Damn, y’all crazy.” The exploits of familiar athletes were already serving as significant reference points in my life, but I could achieve no such chronological/emotional orientation through soccer. I simply had no connection with the footballer, no roots in the game. After that morning in my living room, however, the seeds were sown. 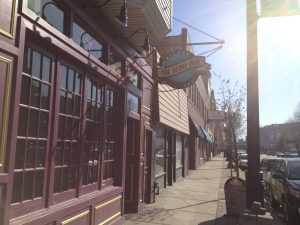 Back at the pub, I surveyed the front room. Chicago’s premier soccer bar certainly looks the part, club emblems stitched into scarves on the walls alongside framed jerseys and photos. The wood paneling and worn leather accents and bottles of tangy HP sauce lend the place a distinct air of condensed Britishness. But as the name suggests, the pub welcomes a worldly crowd. There are, in fact, hoards of Colombians, Uruguayans, Chileans and Argentines in Chicago, all of whom I encountered during World Cup qualifying at The Globe over the past year. Perhaps it’s simply en vogue to root for stylish Spanish sides, but the size of the crowd for El Clásico suggested that there are Spaniards living among us, as well. And over pints of Krombacher several months back, a young man from Munich distilled the meaning of life down to “the three B’s: beer, boobs and Bayern.” Wunderbar.

The Globe is much like the English Premier League itself—an organism of English face and spine with foreign limbs and lifeblood. That is what makes the league and the pub so compelling. Alongside fans of all backgrounds, I spent nearly every Sunday from August until May at The Globe’s back bar, and I saw those seeds I’d planted years before sprout into a deeply passionate, Liverpool-red sapling. Slowly, new reference points emerged —“Remember? I had that fling with [so-and-so] the night before Luis Suarez’s hat trick. Had to sneak out!”—as the team figured more prominently in my daily life. We spent ninety quality minutes together each week at the pub, and in between I gained an embarrassingly intimate knowledge of the players’ personalities through Twitter. I was in it, and I couldn’t get out.

So Liverpool and I were thick as thieves by this point. But the World Cup was nigh, and I felt a familiar twinge of longing for authentic connection, this time with the US National Team, having never lived and died with them as I had on Sundays at The Globe. As the credits rolled on 2002 Korea-Japan, I received an email notification on my phone: “Brad Davis is now following you on Twitter!” What? Yes, the US National Team midfielder whose verified account I didn’t follow had hopped on Twitter in Brazil and decided to become my 135th follower on the day before the World Cup. This was a sign from the soccer gods if I’d ever seen one. This was not just witnessing Brad manhandle a McChicken. This was him offering me a bite. And as I had months before, I blissfully bit off much more than I could chew. It was Brad, the squad and me against the world. And of course it happened at The Globe. I hope you’ll join me there this month.