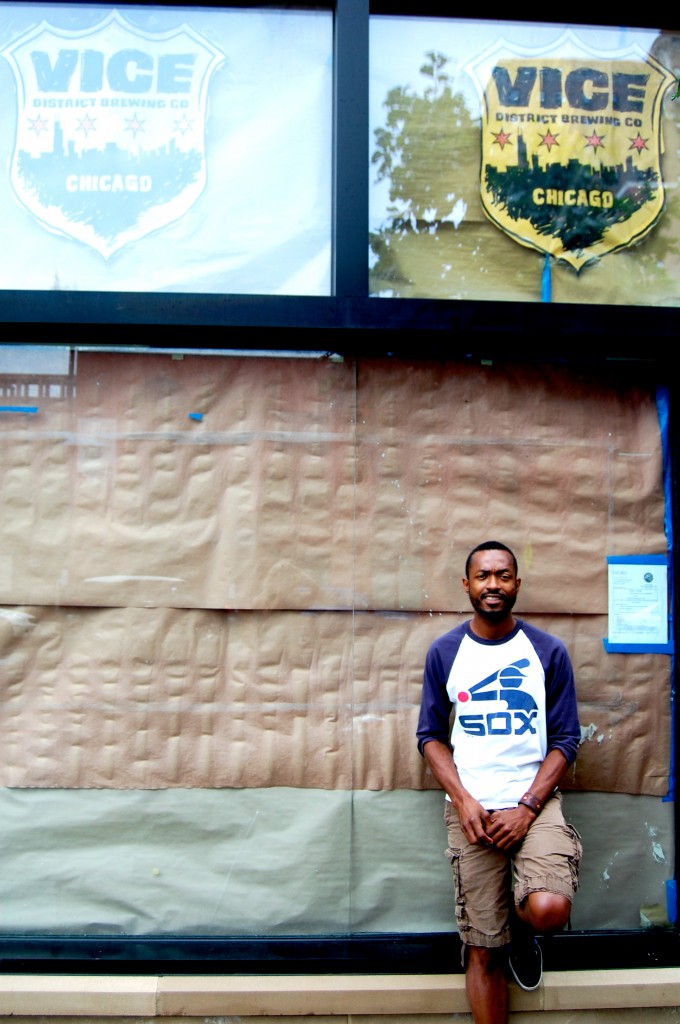 When the snowmageddon of 2011 hit Chicago, it shut down schools, businesses and even Lake Shore Drive. The storm also managed to form a friendship that would eventually lead to the birth of Vice District Brewing. “We met as neighbors, ” co-owner Quintin Cole recalls on meeting fellow co-owner Curtis Tarver II. “He helped dig me out during the snowmageddon, and that’s how we met.”

Three-some years after that historic winter, Vice District Brewing and its taproom are set to debut August 22, with their Black IPA, Extra Special Bitter, Blonde, IPA and Molasses Porter. Opening with unique styles was a conscious decision. “We decided to come out with something that’s a little different,” explains Cole. “Most people are unfamiliar with some of the styles we’re coming out with. Black IPA is not something a lot of people are familiar with…we just felt like we wanted to have a nice mix of beers that represent what we like, but also complementary to people coming in who if they want an IPA we have one.”

Once things get rolling, Cole, Tarver and brewmaster Charlie Davis (formally of North High Brewing and Finch’s Beer Co) plan on having fourteen beers on tap, including seasonal beers and limited small batches because, deep down, Cole and Tarver are home brewers. They like to experiment. Home brewing is where they, and in turn Vice, got their start.

Initially, Tarver and Cole started home brewing with the idea to make beer to save money. The plan backfired as the two found themselves buying more and more brewing equipment, spending close to 3,000 dollars individually according to Cole. While fun for the men of the house, it became a distraction for their wives. “They were very supportive of us and our new hobby,” says Cole, “but they were definitely irritated by the fact that literally everything we talked about, every purchase we made, was related to beer.”

Irritation eventually led to ultimatum. Their spouses said, “Either do something with this [brewing], or you close down shop.” Picking beer, the two men devised a business plan, and started scouting spots that could house a brewery within their budget. After some time, 1454 South Michigan Avenue became the destination. Never during their search was a North Side location considered.

“We’re South Siders,” says Cole. “We knew we wanted to be on the South Side. Whenever we wanted to go to some place to support one of the local breweries we were always traveling north of Madison. We wanted to concentrate on people who live in the South Side or South Loop who don’t want to travel that far north.”

With the location settled, the duo conducted research on the area. In their digging, they discovered the South Loop was once known as the “Levee District.” Home to many brothels, saloons and clubs, the Levee District was the vice district for Chicago during the late nineteenth and early twentieth century. It became obvious to Tarver and Cole as to what the name of their brewery should be.

While vice is considered scandalous and wicked, Vice District is looking to be the opposite. The brewery wants to be a positive force in the community, looking to work with nonprofits in the area. “We want to be able to encourage a lot of nonprofits to maybe look at us as a place to, if they want to raise money…utilizing our space on our off day, the days where we’re gonna be closed, which is mostly Mondays.”

Working with nonprofits isn’t the only part of the plan. Local restaurants will be in as well, with Vice offering a list of local establishments who deliver to the taproom, along with food trucks on site. Patrons aren’t limited to these options, as home-cooked meals are not only allowed, but encouraged.

Being an integral part of the community is a goal for Vice, but not its biggest one. Within the taproom, Vice wants to foster a positive, friendly atmosphere. Communal long tables will be situated in the bar, and the hope is it’ll encourage people to get together and talk. There will be TVs that’ll play ball games, but when the game is over, the TVs will turn off, and it’s back to conversation. The people of the South Loop are important to Vice and, in the end, Cole says the primary goal is “to be a nice little neighborhood watering hole.”