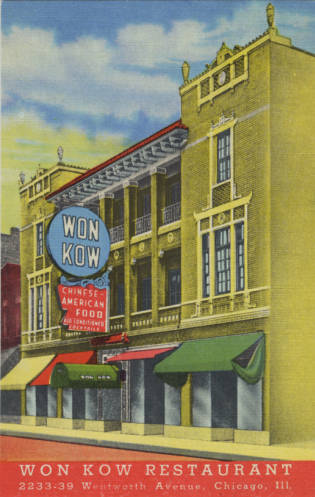 In Chicago’s Chinatown—long before any of us had our first taste of Szechuan, Hunanese or Yunnanese cuisine—there was Won Kow. Since 1928, Won Kow has served what was once known simply as “Chinese food” but is now more likely to be termed “American-Chinese.”

Walking into the Won Kow building, you’re confronted by a long flight of stairs ascending to the second floor restaurant. There’s a printout, taped to the wall at the bottom of the stairs, assuring potential customers that takeout orders can be brought down to them. Such notice would have been unnecessary when Won Kow opened, shortly after the first electric elevator was patented, long before we acquired a fear of walking up a flight of stairs.

The stairs open onto a big wood-paneled dining room. Al Capone’s table was once in the northwest corner, and two of his boys would usually be stationed at the doorway to stand guard over Chicago’s OG. The menu has changed some since those days: Big Al surely never sampled Won Kow’s tempura or sushi…which, of course, are Japanese. And that’s the thing about American-Chinese places today: they frequently serve a pan-Asian variety of chow rather than “authentic” Szechuan or even Cantonese cuisine.

But, really, so what?

American-Chinese is its own culinary tradition, with a pronounced sweetness and many Western ingredients. Heck, American-Chinese food is so American that eating it seems practically patriotic.

American-Chinese food, like Chinese-Chinese food, even has its own regional variations, like Cajun sweet and sour crawdads in New Orleans and tangy mumbo sauce in Washington D.C.

So let’s just forget notions of authenticity, which are so often based on personal preference or simple ignorance, and appreciate some dishes from Won Kow that are solidly within the American-Chinese culinary canon.

We ended our Won Kow dinner with fortune cookies, a dessert virtually unknown anywhere in Asia. Price for app, three entries and three beers: about $50.

Long considered déclassé, American-Chinese food—like burlesque, lucha libre and record players—is now perhaps ready to be reappraised and ushered into the realm of the fashionable.

If you want “authentic” food, there are lots of options in Chinatown. Still, there’s something homey about American-Chinese, which remains unpretentious, almost embarrassingly tasty and, strangely, old school.