by Brian Hieggelke
October 15, 2014Filed under:

Gemini Bistro in Lincoln Park recently celebrated its fifth year in business. I stopped by just after their anniversary to chat with head bartender Pauly Graves, who’s been with Gemini Bistro since opening day. Pauly has an easygoing demeanor, but one that also speaks to his seventeen-year experience behind the bar. He greets his customers like family, but also maintains his professional posture, making sure their experience is as comforting as the food and drinks he serves. I watched him serve drinks with a deft hand and a generous pour as he reflected on his five years at Gemini Bistro.

What’s the most important lesson you’ve learned in terms of what you do now?
Reading people and giving them what they need, other than booze in a glass. The guy who wants to sit here, read his book, and not be bothered? I’m great at that. He doesn’t even know I’m there. The woman who just lost her husband and wants to talk; I got that in my wheelhouse too, no problem. I like to give more of a… bedside manner. I’m used to the Chicago drinker now. I know what they want. Everyone’s first words when they look at this menu, “Is it sweet, is it sweet, is it sweet?”

That said, are you proud of any of your drinks in particular?
The Squirtsky. Little simple syrup, grapefruit juice, Finlandia Grapefruit vodka, regular vodka, and finished with soda with a grapefruit supreme and a lime garnish. Summery in a way, but sometimes in the winter, it’s like your vodka and soda with a little bit of fruit. It’s not like a screwdriver, but it does have citrus in it.

Have your nine basic cocktails been on the drinks menu for a long time?
Yeah. Five years. In the very beginning, there were a couple minor changes. There was a pomegranate daiquiri that didn’t move well. It was just rum, a little fresh lime, and pomegranate. It looked really good, but it just wasn’t getting ordered. The Heater used to be a Rosarita, which was a margarita with a bit of mashed strawberry, and that didn’t move that well for us. Then we had a cop that would come in, and he would say, “Do you have any serrano chiles, and would you mind making one with a chile mulled in it?” We called it the Heater, not only because it’s got heat, but because the “heat” came up with it. He still comes in. He asked for it, and we said, let’s put Steve’s drink on here. 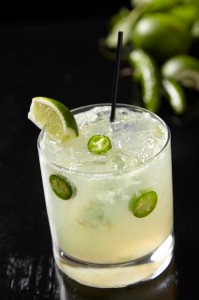 What approach do you take to bartending?
I like being a bartender, not a mixologist, I like making great drinks, and I have respect for the craft. At the end of the day, I want to make the drink that’s best for the guest, without being too intimidating. A lot of our drinks are kind of like that. They’re straightforward.

You prefer the title “bartender”?
I was trained by an Irish bartender who was extremely good at his craft, he made really good drinks, and you know, I don’t know that he had eyedroppers and stuff like that, but he took his craft seriously, and that’s how he taught me.