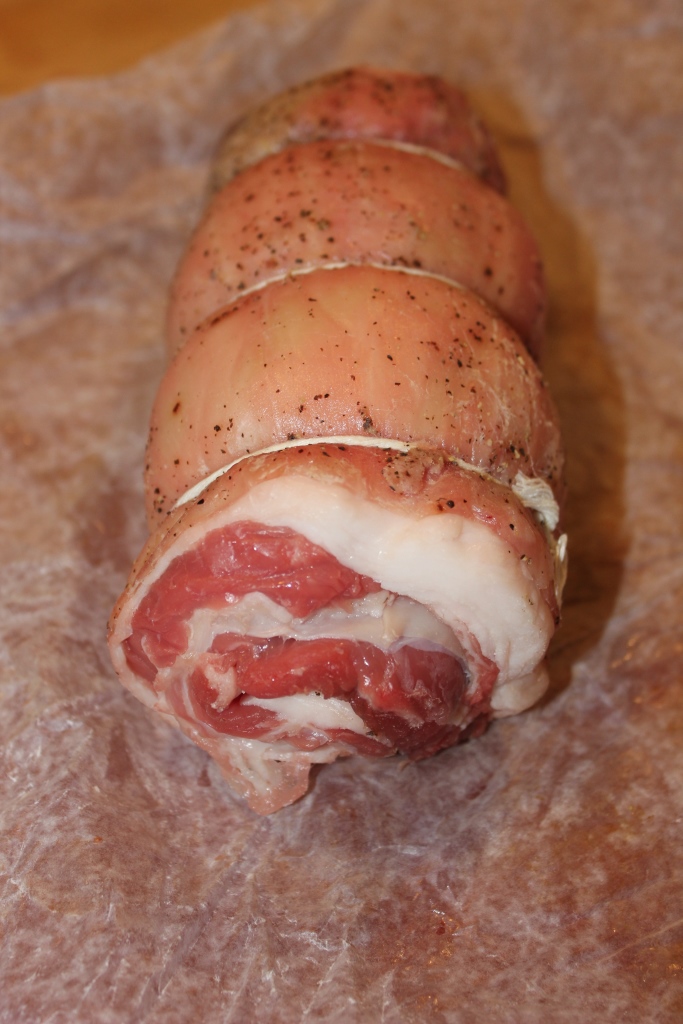 Years ago, back from a college foreign study experience in France, which included a cooking class, I felt worldly. For Thanksgiving, I announced to my parents that I’d take care of everything. Instead of turkey, I made a wine-poached trout. My father, sniffing at such pretension, rose after the holiday dinner and intoned, “Never again.”

Still, traditions notwithstanding, turkey is one of the least interesting of all proteins, a notch or two below llama. Turkey has its place on a club sandwich with a good amount of bacon or in a burger with a lot of Widmer’s ten-year-aged cheddar melted on top. Otherwise, it’s challenging to render the fowl appealing.

Thanks, in part, to Norman Rockwell’s iconic family portrait, we expect to see the big brown bird, center-table, and anything other than turkey for Thanksgiving is anathema to many. Nonetheless, we’re going to suggest a relatively unconventional protein for at least part of the meal.

Big in Mexico and points south, as well as Africa, the Middle East and India, goat is just starting to make inroads in the United States.

For years, our favorite place to eat goat has been Birrieria Zaragoza (4852 South Pulaski), where the Zaragoza family serves this signature dish of Jalisco. Their slow-cooked goat meat is served on a plate or rolled in tortillas.

Goat is also starting to show up at some fancier places.

Goat is now on the menu at Sixteen in Trump Tower (401 North Wabash), which serves a Liberian stew of bitter greens, palm butter and goat wrapped in rice. When a Michelin two-star restaurant puts goat on the menu, you know the protein has arrived.

Though goat is accepted among the gastroscenti, the meat remains relatively unknown to most of the dining public. I wouldn’t necessarily suggest replacing the turkey entirely with goat (unless, as my friend Wendy Aeschlimann suggests in this week’s Booze Muse, you aim to “get fired from the family”). Still, you could definitely serve goat as a side or an appetizer.

I recently purchased goat belly (or “goat bacon,” if that sounds more appealing) at Carnivore (1042 Pleasant, Oak Park). At $14/pound, the goat from Carnivore, like the goat you might enjoy at many higher-end restaurants, is sourced from Kilgus Farms.

Goat meat is carried at several places around town, including Olympia Meat Packers (810 West Randolph) and even Eataly (43 East Ohio), though make sure you call ahead because, of all the mammals we eat, goat is not the most popular and so may not always be in stock.

Goat’s lack of popularity is exactly why I’m recommending it for Thanksgiving, and I’d suggest you prepare goat bacon. The word “bacon” makes it seem more approachable, and who, really, doesn’t like bacon?

At Carnivore, butcher Brad Knaub seasoned and tied the belly for me. “No one is going to do this better than a butcher,” he said, rolling out the meat and sprinkling it with salt and pepper before neatly securing it with string. 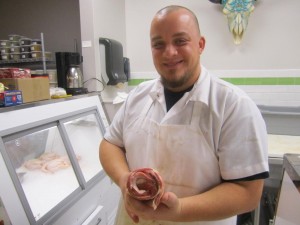 Brad Knaub of Carnivore, holding about a pound of goat bacon/Photo: David Hammond

Here’s how I made my goat belly appetizer:

“What you want to do when you’re browning the sliced belly,” said Knaub, “is to get the outside crispy while keeping the inside moist.”

You can retain the braising liquid and reduce it for sauce.

Goat is a lot like lamb; pretty much whatever you eat with lamb (condiments, sauces, and accompaniments) will work with goat.

When you serve goat bacon at Thanksgiving, expect some people to look uncomfortable when you tell them what’s on their plate. That’s cool. But you should also expect others to say, “Wow, I’ve never had goat before. This is fantastic.” 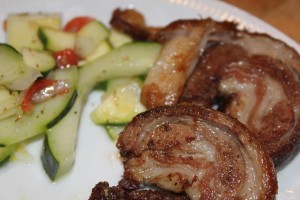 Thanksgiving is all about bringing different kinds of people together (for instance, First Peoples and the Europeans who would eventually overrun their world), so it seems most appropriate to introduce foods at Thanksgiving that represent other cultures. You don’t have to make goat the main course, but as a side, why the heck not?

This year, in addition to goat, we’ll also be serving some black bear and African tiger steaks that I picked up at Czimer’s Game & Seafood (13136 West 159th Street, Homer Glen), the best local source for unconventional proteins that will shake up any dinner.

I was really “shaken up” by your proposal to serve “African tiger steaks” and “black bear” at your Thanksgiving dinner. Are you aware of the provenance of these foods? As I’m sure you’re aware, Richard Czimer was sentenced in 2003 for his role in an illegal Midwestern animal trafficking ring that involved selling over two dozen protected animals for profit. Why would you want to promote such a despicable business. I expect better from you and, more importantly, from New City.

Mr. Czmier’s defense was that he was unaware that the meat being sold to him was lion (which was demonstrated through DNA testing, available to the authorities but not to him). He served his time and is now under strict scrutiny by regulatory agencies. This butcher shop has been around for over a century (though it was closed temporarily after it was set on fire by arsonists/animal rights activists); I’m not ready to write off him or his place of business based on one violation.

Mr. Hammond,
Well, their website lists “African Lion,” not “African tiger,” so I’m not sure how you acquired it for Thanksgiving. In any event, it seems pretty clear to me that he knowingly sells lion meat. I question the ethics of consuming large predators at the top of the food chain merely for purposes of appearing cutting edge or gastronomically adventurous.