by Brian Hieggelke
December 11, 2014Filed under: 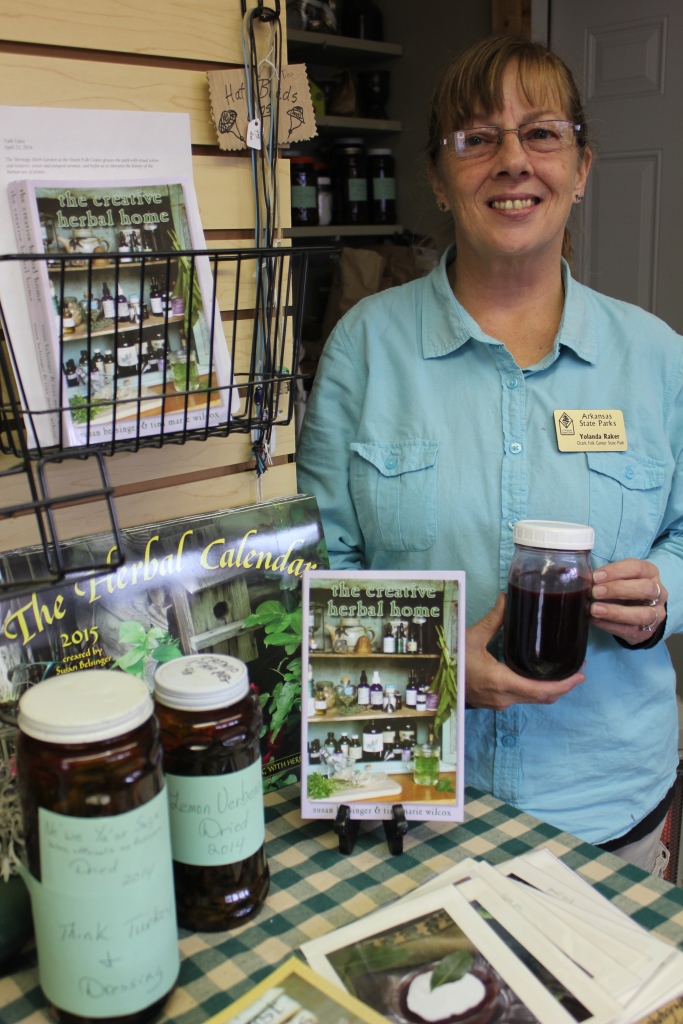 Shrub. Over the past few years, you’ve probably seen this drink of fruit juice, sugar and vinegar listed on many Chicago cocktail menus. I recently happened upon shrub at the Ozark Folk Center in Mountain View, Arkansas. The beverage was being prepared by Yolanda Raker, who works at a little herb shop devoted, like many shops in this state park, to the preservation of Ozark folkways.

Shrub—fruit juice, sugar and vinegar in 1:1:1 ratios—came to the Ozarks courtesy of the same folks who created the music of the Ozarks: mostly Irish, Scottish and English immigrants who used a fiddle and banjo to plant British ballads on new soil.

Mixing fruit with sugar and vinegar was a way to preserve the fruit (or at least its juice) before commercial ice or refrigeration. The hardest, messiest part of most shrub recipes is the preparation of the juice, which sometimes calls for macerating the fruit in sugar, straining it all through cheese cloth, etc.

But we’re lazy. We simplified the traditional recipe by putting the fruit through a juicer: this may not be an orthodox technique, but it’s fast and simple and so it worked for us. We juiced farmers-market blueberries that were frozen last summer; once we determined how much juice we had, we added equal portions of organic, unbleached sugar and Bragg’s apple cider vinegar.

It was a simple technique… so simple, in fact, that I started wondering if I wasn’t maybe losing something by just putting the berries through a juicer rather than macerating, staining, etc. I asked Michael Dietsch, author of just-published “Shrubs: An Old Fashioned Drink for Modern Times” one key question: “Am I losing anything by simply juicing the fruit I put into shrub?”

“No. Hell no,” Dietsch responded. “I want shrubs to be easy for people to make.  I’m very careful in the book to say there’s no one, true way to make the damn things. I didn’t suggest using a juicer for any of my recipes for the simple reason that not everyone owns a juicer. I didn’t want my readers to feel like they had to go out and buy a bunch of equipment first.”

So if you have a juicer, juice the fruit and just add sugar and vinegar; a day in the refrigerator seems to thicken up the solution to a more syrup-like texture.

“A nuanced though non-boozy adult beverage,” as Dietsch describes it, shrub can be taken straight, with a little soda water, or as a component in a cocktail. Paul McGee at Three Dots & a Dash (435 North Clark), Danielle Lewis at GT Fish & Oyster (531 North Wells), and many other bartenders all over Chicago are finding that shrub is a good, old-timey way to introduce an agrodolce dimension to their beverages.

Although it would usually be made in the summer (when fruit is ripe), shrub can be made any time of year. Because shrub was a way to preserve fruit during the colder months, winter seems the appropriate time to enjoy this beverage.

We mixed our blueberry shrub with Reyka vodka and a splash of carbonated water. The vodka seemed to mellow out the shrub, and the carbonated water added texture and pleasant foaminess (perhaps from the interaction of carbonation and vinegar).

Shrub, as you might suspect, also has a medicinal application: British sailors favored shrub as a way to reduce fever and inflammation. When I walked into the little herb shop in the Ozark Folk Center, I had tightness in my throat that I sometimes experience right before getting a full-blown cold. After I took a swig of shrub, my throat did feel better, Psychosomatic? Perhaps, but whatever it was, it soothed my throat and I didn’t get a cold.

So, if you need a health-based rationale for enjoying a cocktail, just add shrub.