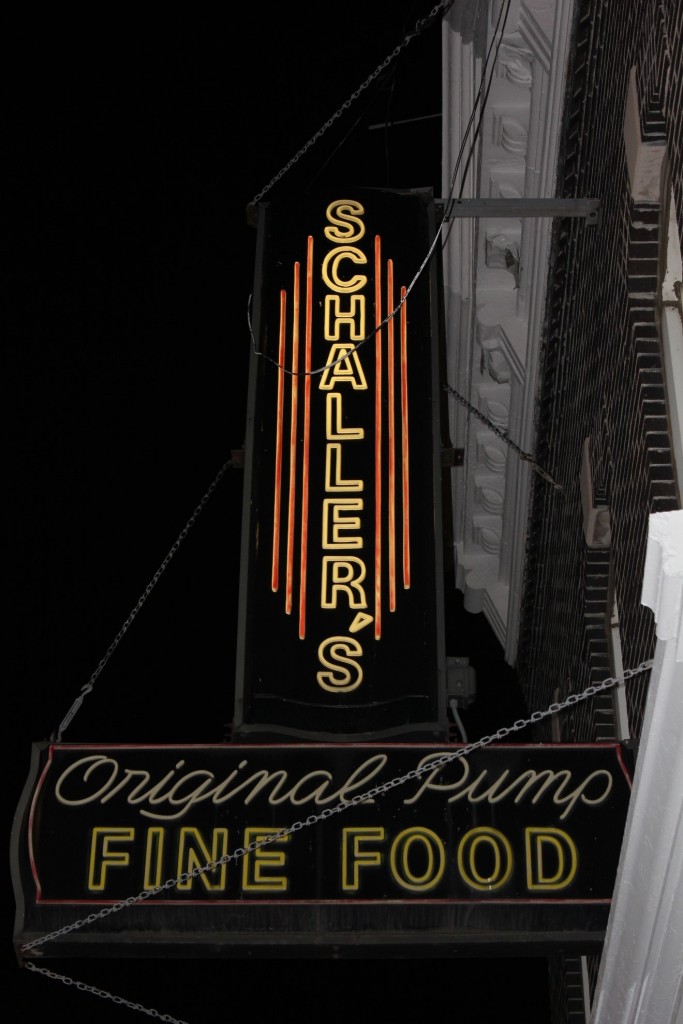 During Prohibition, beer was allegedly pumped in from a brewery next door to Schaller’s Pump (3714 South Halsted), enabling barkeeps to reduce on-hand inventory (or “evidence, ” as it would have been called by law enforcement) and earn its name (“Pump”).

At the back of Schaller’s, there’s a peephole once used for vetting thirsty patriots engaged in heroic acts of civil disobedience against the tyrannical Volstead Act.

The bar, which opened in 1881, is across the street from 11th Ward Democratic Party headquarters.Many present-day Chicago writers have focused on the place’s history rather than the food served:

As a new year dawns, with Schaller’s well into its second century, it’s time to provide a more complete review of the food at this place, which is recognized as Chicago’s oldest continuously running bar.

If you go to Schaller’s Facebook page, it lists “Restaurant. Bar. Home Improvement.” Though we’re intrigued by “home improvement,” it’s “Restaurant” that’s listed first, so that has to count for something. We went specifically for the food.

We started dinner with a “relish tray,” just pickled beets and macaroni salad, all probably scooped from a food service can. We had several different entrées: 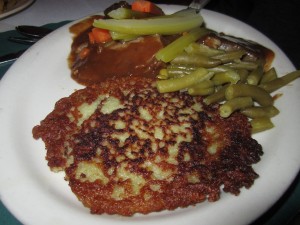 Schaller’s kitchen was shown to best advantage with potato items, like the hash browns and pancake. This is not meant to damn by faint praise, but it is, no denying it, faint praise.

We had Bud in a can, Stella Artois in a bottle, and Bud Light on draft.

At Schaller’s Pump, food and drink are secondary. We tried, god knows we tried, and we don’t feel all that good about ourselves for slamming the chow at such a beloved neighborhood place. And the place is beloved: the night we went, the relatively small front dining room—with aging wood trim and glossy sports posters on the walls—was filled with locals, double-dating older couples, a table full of neighborhood guys eating ribs with their Sox hats on, a family with their adult child, a few ladies dressed in holiday best, beaming to be back in a place they’ve probably been going all their lives.

Our server, and others behind the bar, were unremittingly sweet and attentive. It’s for these people of the place—and perhaps a platter of hash browns—that we’d revisit Schaller’s.

As we left that night, we saw Jack Schaller—well over ninety years old—getting out of a car and hobbling into the side door on Halsted, crouching against the cold. Seeing that, any lingering remorse about dinner vanished, and we started warmly looking forward to our return trip.