by Brian Hieggelke
February 19, 2015Filed under: 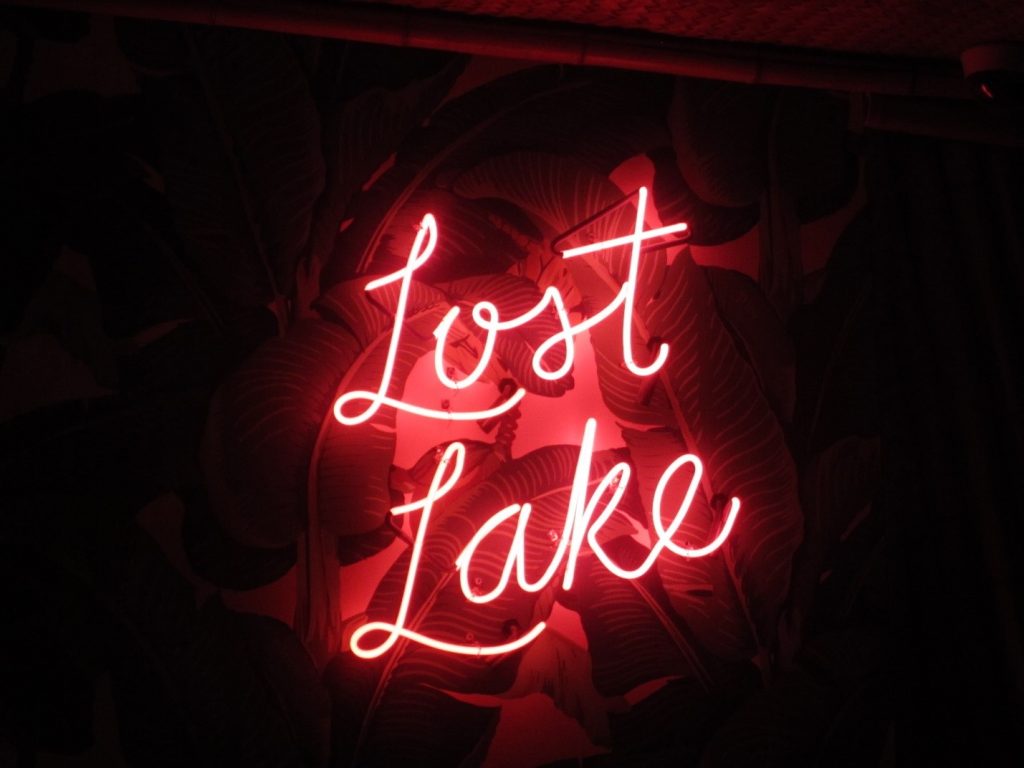 When Paul McGee, one of Chicago’s premier designers of adult beverages, launched Three Dots and a Dash (435 North Clark), he reignited our enduring fascination with tiki bar culture. The tiki spirit had never flamed out, of course, and it’s been throbbing for decades in all its over-the-top weirdness at places like the caught-in-amber Hala Kahiki Lounge (2834 River Road, River Grove) and the wiggly floorshows—featuring Polynesian Elvis—at The Tiki Terrace (1591 Lee, Des Plaines).

Three Dots and a Dash rests under the big umbrella of Lettuce Entertain You Enterprises, and it’s cast in that undeniably successful mold. Just as Mon Ami Gabi emulates the best qualities of a French bistro and Shaw’s evokes the vibe of an old timey urban crab house, Three Dots and a Dash seemed to us perhaps a tad self-consciously designed, perhaps even over-capitalized, but with better drinks—and a better-looking crowd—than just about any other tiki bar we’d ever been to. And it’s the only tiki bar we’d ever seen with a velvet rope to channel throngs of nouveau tiki enthusiasts.

But there were problems.

“Three Dots and a Dash was never what we wanted it to be,” said our server at Lost Lake. She’d previously worked at McGee’s first tiki bar and looked the part of a circa WWII tiki waitress: Betty Grable hair, Bette Davis eyes, Bettie Page figure wrapped tight in a tropical print dress that seemed to match the wallpaper.

“We want Lost Lake to be less corporate,” she cooed. “We want to be more of a neighborhood bar. We want to stay here forever.” We could almost hear “Bali Hai” playing in the background.

Arriving at Lost Lake on a Saturday night at 5:30pm, when we naively expected to “beat the crowds,” it was already a waiting scene. The host told us that there was a line down the street an hour earlier when the place opened—they let groups in slowly, so as not to create a sardine feel, which is smart. Clearly, though, Lost Lake is already meeting with a fairly high level of acceptance—much of it well deserved.

Perhaps the huge drawing power of this place is a drawback. Bartenders were working faster than a monkey in a monkey tree, and our first two cocktails seemed misfires. Hula Hips of Heaven (tequila, mezcal, grapefruit, lime, falernum, Angostura bitters, absinthe and cinnamon) was overwhelmed by tequila and mescal, flavors we like, though we missed the much vaunted “layers of flavor” characteristic of the archetypal tiki drink; absinthe and cinnamon were not apparent. Cinnamon, however, was the predominant flavor in Mystery Gardenia, which is odd as the cocktail was not supposed to contain any cinnamon. Could the bartender (not McGee when we were there), in happy hour haste, have accidentally mixed the wrong ingredients? 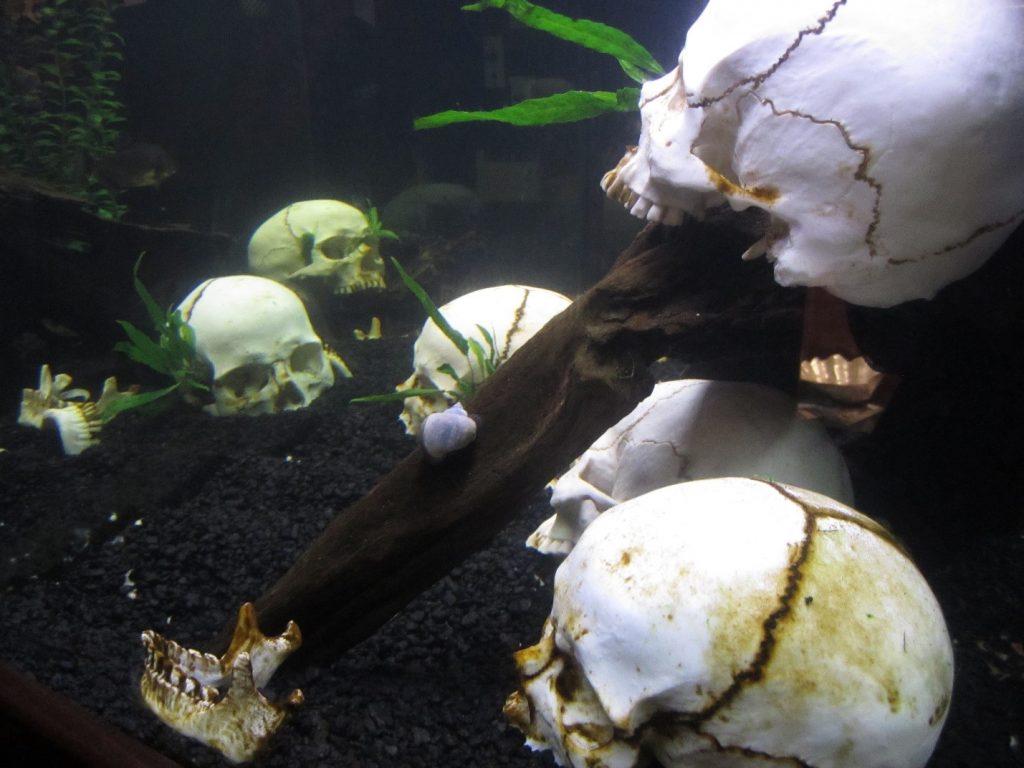 Our second round was much more successful. The namesake Lost Lake was a classic of rum and fresh juices of passion fruit, lime and pineapple with Maraschino and Campari: this tall drink hit classic tiki flavors, bright and multi-dimensional. The Punch Vieux was simply aged Rhum Agricole, cane syrup and lime, one boozy though very delicious beverage, foregrounding the excellent rum, a pleasing three-ingredient drink for a man who usually orders a Manhattan.

All individual cocktails are $12, though for $25-$40, you can get huge ceramic chalices of drink—such as Lima Lima Scorpion Bowl and Tahitian Rum Punch—to group-slurp with up to four. Shared beverages seem fitting: few go to tiki bars to drink alone.

If you’d had the chance to visit Trader Vic’s in the Palmer House, you know that even at such classic tiki hangouts, food seems an afterthought. There are usually the classic Cantonese-ish, vaguely Polynesian bites, exemplified in the Pu Pu Platter loaded with Crab Rangoon, pork ribs, chicken wings, coconut shrimp, sometimes sushi or teriyaki, sometimes all surrounding a hibachi grill, and all pretty much okay. 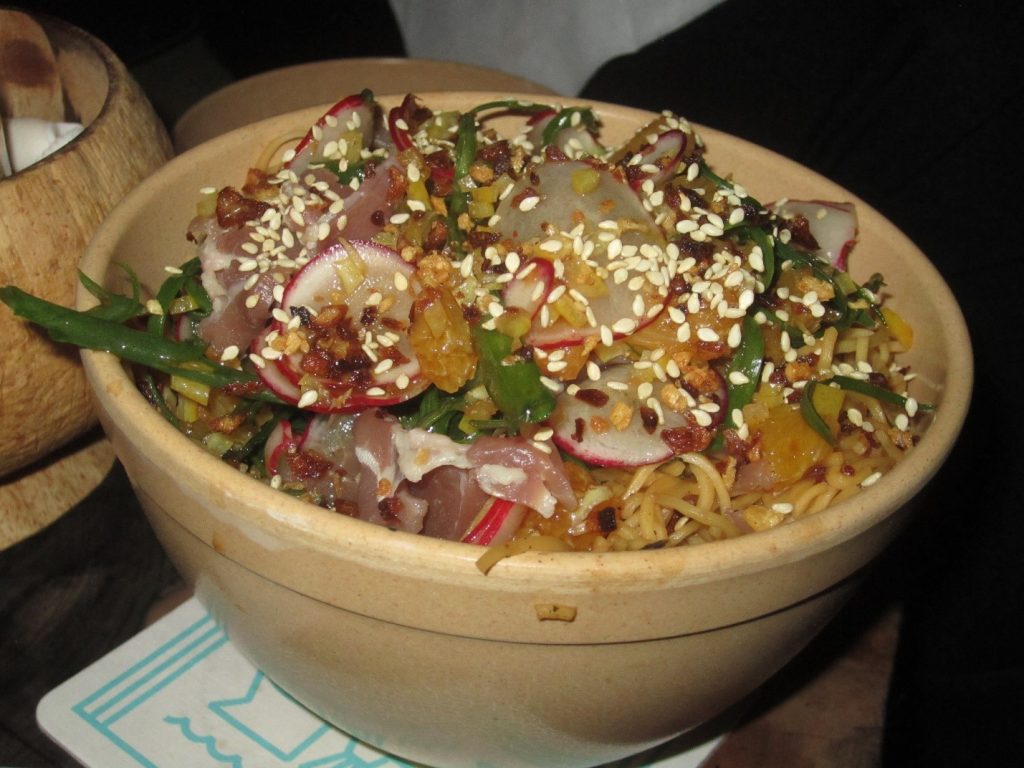 Lost Lake shares an entryway with the takeout counter for Thank You, a Chinese-inspired restaurant with a focused menu of excellent bites at extremely reasonable prices. Five bucks gets you four very crisp egg rolls—each about the size and shape of a Cohiba Robusto—filled with country ham, shrimp and white kimchee, super delicious. Mongolian beef ($8) comes in an overflowing bowl—maybe a pound of food—and the sweetly flavored hoisin-bathed chunks of chuck balance bitter rapini, with coriander, winter bamboo and rice, a lot of savory stuff, better-than-expected drinking food. The dry-fried longbeans with puffed grains were just four dollars and a pleasing accompaniment, sliced into two-inch threads, easy to eat with chopsticks. For alcohol-absorbing efficiency, the pan-fried egg noodles were perfect.

The vibe at Lost Lake is maybe more like the tiki bars of years ago than the more upscale Three Dots and a Dash. Walking into Lost Lake, there’s a fish tank (swimming with a rapidly diminishing population of what we were told were cannibalistic piranha) adorned with human-looking skulls, a modestly morbid display that contrasts with a massive Disney-like/”Apocalypse Now” wall of skulls that greets you when entering Three Dots and a Dash. Compared to McGee’s previous bar, Lost Lake is more like the neighborhood hangout it aspires to be, and despite some growing pains, it could very well last a long time. Right now, it’s a good time and likely to get even better.