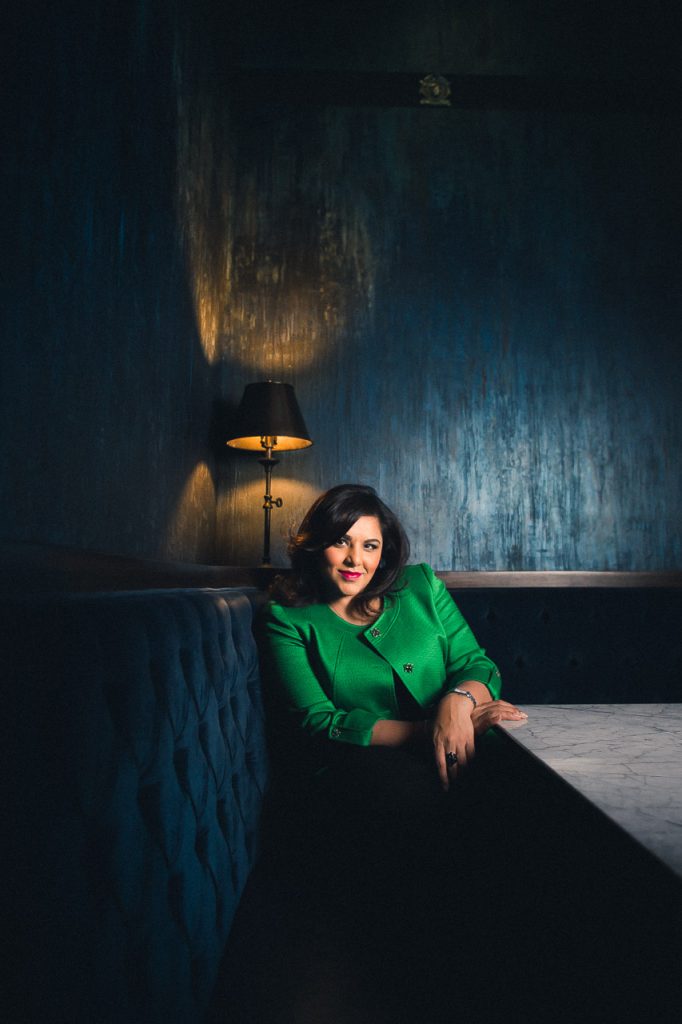 Most Chicagoans were introduced to Alpana Singh on “Check, Please!” After hosting this truly ground-breaking restaurant review show for ten seasons, Singh left in 2013. She soon opened her first restaurant, The Boarding House. Earlier this year, her Seven Lions opened on Michigan Avenue across from the Art Institute. Despite those accomplishments, one feels Singh is just starting to make her mark on the Chicago restaurant industry. Certainly, her excitement for the industry remains undiminished, telling us “Every time I walk into a restaurant it’s still magical for me. It’s thrilling and it’s exciting and it transports me.”

This fascination with the restaurant industry goes back to her early years in Monterey, California. “My mom waited tables, and she would let me play restaurant. It was the most exciting thing I’d ever done. I was eight or nine at the time. I’d go to the tables and take their orders. I’d fill the Coca-Cola. I would try on her uniform, always asking ‘Can I do it? Can I do it?’ Restaurant work was all I wanted to do. As soon as I turned fifteen [the age when you can work in a California restaurant], I got my permit and started working as a hostess at Bakers Square. I just could not wait to start working in restaurants.”

Singh became the youngest female to ever gain a Master Sommelier’s certification, working at Everest under Chef Jean Joho before she began hosting “Check, Please!”

Though she has led an undeniably rich life, we were most interested in her philosophy of leadership, how she manages her restaurants and her people.

Tell us a little about your leadership style at The Boarding House and Seven Lions.
Running a restaurant is really just a conduit to helping other people become great. I know that sounds cliché, but I really believe that. We have 230 employees between restaurants, and here’s how I look at it: you come into our fold; you come into our family; I want you to become a better person.

There’s a very high level of expectation when you walk into one of my restaurants. I tell my staff that “I’m sorry, the expectations are very high for both of us, because you represent the restaurant and we’re not allowed to get away with much.” I read all my Yelp reviews and respond to ninety percent of them. All the negative Yelp reviews begin the same way, “I had such high expectations…” and I think, “Oh my god, I’m only human.” Sometimes the pressure’s really great. My employees would describe me as “Very demanding, very disciplined and strict, but she’s very human.”

I sent a gentleman home last night because he forgot to put mignardise on a table. The server said, “I’m sorry. I forgot,” and I said, “I’m sorry, but I don’t have the luxury of you forgetting. I wish I did.”

Did you have a mentor, someone who showed you the way to be a leader?
Chef Joho of Everest. He started working at eleven. He received Michelin stars at a very young age, and I think he saw a lot of himself in me. What I saw in Joho was a man who received many awards and accolades and yet he’d still say, “Well, what about tomorrow? We don’t let this define it. How can we do better?” And I would think, “Is anything ever good enough for you?” And when you try to reach those standards, you’re held to those standards.

It’s like the guy in the movie “Whiplash”: Some people are drawn to those standards and others say they just can do it and some will drum to the point that their fingers start bleeding because they want to be that great. Tanya [Baker, chef at The Boarding House who just received a James Beard Rising Star nomination] is one of those people who gravitates toward those standards.

I don’t sleep much. I’m expected to be at both restaurants at all times, it’s stressful. If a customer comes in and I don’t talk to them, because they know me from television—I’ve been in their homes, one of their friends—then they’re disappointed. I don’t like disappointing people. If people come in here and they don’t have a good time, it breaks my heart. I feel like I failed them.

But I asked to be put in this situation. I did this to myself [laughs].

When you consider restaurant groups in Chicago, there are none that I can think of with a woman so clearly at the helm. So you’re in an unusual position. Surely, there were barriers, but is being a woman in a man’s world in some ways advantageous?
I certainly get a lot more attention. But there’s a different sort of pressure. You read a lot about Paul Kahan [Blackbird, Big Star, etc.] but no one ever comments on what Kahan is wearing. Or if his hair looks nice. I’ve had comments from people like “Wow, you look really tired.” Or “She wasn’t wearing lipstick.”

That’s just how women are perceived. Sexism is blatant everywhere. Not just in restaurants. It bothers me in the sense that I have to do what I have to do but I also have to make sure my hair looks nice, I have my makeup on, my clothes look nice, because I will be judged whether I like it or not. So you’re expected to do everything perfectly, no fail, without showing any cracks in the façade.

Is there any one question you will not answer?
Yes. The one question I will not answer is “Alpana, do you feel like you’ve made sacrifices in your personal life.” This is a very tired question, and I get asked this question more often by women than by men, which I find rather interesting. I think no matter what you do, when you’re an entrepreneur, in your own business, everybody makes sacrifices. It’s not specific to women. My partner has two kids, and he makes sacrifices, he misses recitals, he can’t be there, but he’s not asked that question.

Let’s say a young girl comes up to you and tells you she’s considering a future in the restaurant business. What do you tell her?
When I was twenty-one, I’d just passed the Master Sommelier exam, and I’d go to restaurants in San Francisco and no one would hire me. I was too young. People thought it was crazy to be a twenty-one-year-old somm. People said, “You have no experience.” So I worked at a wine shop in Carmel, and I remember thinking I was wasting my time, and that I deserved to be a sommelier. That sense of entitlement is extremely dangerous. So take your time to build your foundation. Start off as a hostess. Don’t worry about being a manager if you haven’t been a host before.

Last year, I was at a wine and food festival, and a young woman came up to me and said, “You’re the reason I do what I do.” She had just passed her advanced-level sommelier exam. She said that she’d read a story about me that her friend gave her, and she said “That’s what I want to do.” She was a lounge singer at a restaurant, and she quit to become a sommelier.

If I can show women the possibility that they can do it, if I can inspire them in some way, then it’s all worth it. It gets back to why I do what I do: because I want people to be great, to be happy whether that’s happy with their meal or their career.

I always tell women, though, that when it’s time to move on it’s time to move on. A sense of loyalty is great, but when that loyalty is not returned, it’s very dangerous. We as women will stay in a position because we don’t want to disappoint. But there are situations out there where you’re taken advantage of. What you’re giving or sacrificing is not being returned. How about starting by asking to be paid properly? Why just seventy cents on the dollar? Why don’t I deserve one-hundred percent? Why not me? If we have the gumption and the fortitude, and if we can back it up, we should ask for one-hundred percent. But that means we have to give one-hundred percent. The change has to begin with you. You have to be the change. You have to start the change. Life is unfair. I own thirty tubes of lipstick for a reason.

We heard that you played a role in bringing the James Beard Awards to Chicago. Could you tell us about that?
November about two years ago, I had just recently separated from my husband [author Charles Blackstone], and a friend said “Come to New York.” There was a Beards gathering at the Four Seasons, and I was kind of numb at the time, but I thought, “I’m going to have fun.”

So I was sitting next to this guy, Fred Seigel, and we started chitchatting. Seigel knows Mayor Emanuel, and he’s on the Beard Awards committee, and I just started talking and I asked “Would you ever consider moving the Beard Awards to Chicago?” I’d just joined the board at Choose Chicago, so tourism was on my mind. Much to my delight he engaged in this conversation and asked me, “Do you think we can get this in front of the mayor?” I said, “Well, I definitely know who to email,” and he said, “I want to pursue this.”

He gave me his business card and said, “Let’s talk tomorrow.” So I emailed Don Welsh, president of Choose Chicago, and I told him that there might be an opportunity to foster a conversation about bringing the Beard Awards to Chicago. Don, bless his heart, said, “This is the most fantastic news ever.” About ten days later, we all have a conference call, and next thing I know, there’s an announcement that they’re bringing the Beards to Chicago for the first time ever, for their twenty-fifth anniversary. Why not Chicago? Just because things have always been done a certain way doesn’t mean we have to continue. And there’s no denying, Mayor Emanuel wanted this and he made it happen. He understands the value of Chicago restaurants, and if it wasn’t for his help, the Awards wouldn’t be happening here.

You hosted “Check, Please!” for years, so you’re wired into the Chicago dining scene. Where is it going?
Because of the price of real estate, especially in River North, it’s very hard to execute a darling restaurant, a forty-to-sixty seat restaurant. When I talk to chefs about their dreams, and they say “I want to open a seventy-seat restaurant,” I think, “Okay. How will you make money doing that?”

So it becomes a question of size. We need to have a bigger operation to have more opportunities for cash so that we can offset demands. So I see a growth pattern of 200-300-seat restaurants, massive restaurants. Do I want to keep opening 4,000-square-foot restaurants? Well, they’re very difficult, but when you put the numbers on the table, that’s what it takes, especially if you want to be in River North, Michigan Avenue, downtown.

Danny Meyer is closing Union Square Café (in New York) because of the real estate costs. That’s the canary in the coal mine for our restaurant industry.