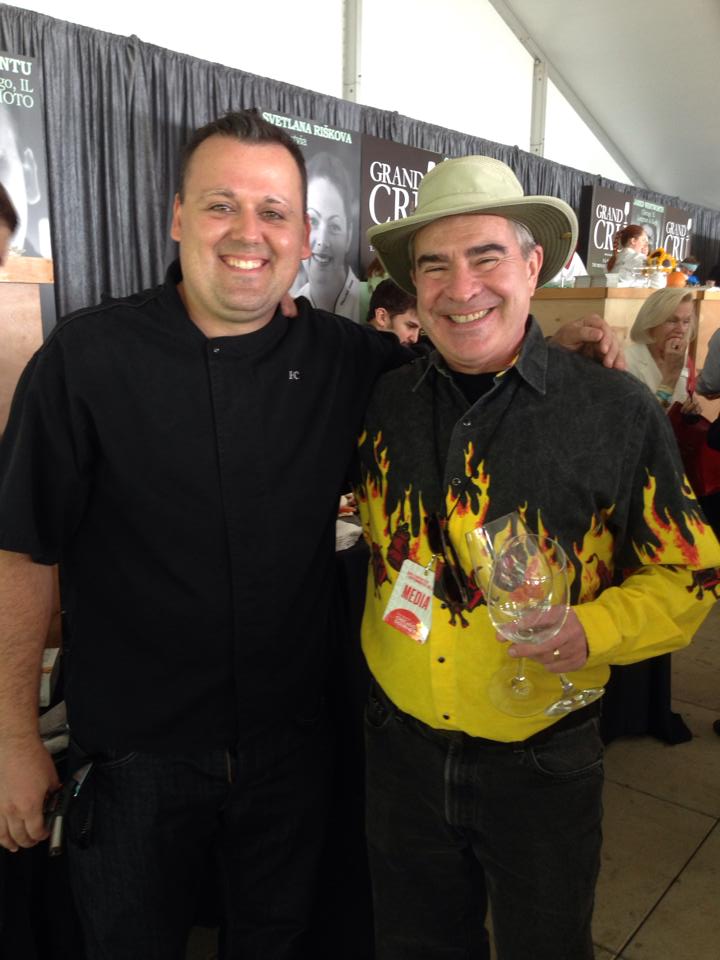 Omar and me, photo Derrek Hull

I met Homaro “Omar” Cantu in 2004, a few months after he’d opened Moto, when I went there to dinner with some sixteen or so friends. One of those friends, Catherine Lambrecht, brought a container of raccoon meat. Chef Cantu, prankster that he was, got a hold of the meat, minced it with spices (there was juniper in there, and perhaps garlic) and arranged it on a plate that had a dotted yellow line running down the center and a few clusters of unidentifiable though edible debris scattered about. On the mound of raccoon meat, Cantu positioned a picture of a raccoon that he’d downloaded and printed on edible paper with edible ink. It was a roadkill tableau that a few weeks later inspired a totally bullshit Time magazine article about an “avid hunter” who brought in the freshly killed raccoon and challenged Cantu to prepare it. It was one of the most ingenious, entertaining and hilarious meals I’d ever been served, and it goes to show that even Time magazine could be taken in by Cantu’s antics.

Shenanigans were part of who Cantu was, and the press delighted in tales of his high-tech PT Barnum-like approach to high-end cuisine. At that first Moto dinner, one of my buddies suggested that some of the dishes—the edible menu, the fish sizzling in a polymer box in front of each diner, the beef served with a syringe of sauce—were “gimmicks,” to which Cantu responded, not missing a beat, “What’s wrong with gimmicks?”

What, indeed, is wrong with gimmicks? We go to restaurants—and to movies, the theater, art museums—to be entertained, and entertainment is many times an illusion, a gorgeous sleight of hand, a seductive invitation to suspend disbelief, a trick intended to please.

Not long after that first dinner, I met up with Cantu at Moto to record a segment of Soundbites, a series of interview-based pieces for WBEZ that focused on how Chicago chefs like Cantu, Grant Achatz, Paul Kahan and others used sound to manage their kitchens. Cantu introduced me to what he said was an automated order taking/giving device that used robotic voice alerts to let the kitchen know when orders were placed, if there were any dietary restrictions, when orders should be fired, and so on. After the demonstration, I thought I distinctly heard Cantu semi-discreetly pick up the intercom and whisper to someone that “okay, it’s over.” As we left, I saw Cantu’s friend and pastry chef Ben Roche—I kid you not—come from behind a curtain (shades of Oz!), suggesting that perhaps it was indeed Roche, and not an automated robot voice, broadcasting those verbal commands to the kitchen. I will never know if that system was for real or just a brilliant bit of legerdemain designed to amaze a radio journalist who would then dutifully convey news of this amazing technology to his audience. Later, it was reported in Chicagoist that such “mission control” was up and operational at iNG.

In 2010, my wife Carolyn and I were invited to Moto to appear on-camera for a Planet Green television series entitled Future Food. It was “reality” television (i.e. essentially fiction-based narrative posing as documentary), and it examined how chefs like Cantu were working to change the way we eat, ensure the sustainability of food, and feed a hungry planet. At the beginning of this show, Cantu addressed his kitchen staff, solemnly saying something like “David Hammond is coming to dinner tonight. He’s a food critic. He can close down this restaurant with a bad review.” This, of course, was unadulterated malarkey. The narrative arc of the segment ended with a scene the following morning: as the sun came up over Moto, Cantu and Roche looked over “my review” (which I posted on Chicago chat site LTHForum.com), and breathed a sigh of relief that, thank goodness, the mighty “critic” had wielded his power in such a way that their restaurant would be able to stay open another day.

I was at one of the first dinners at iNG when the Miracle Berry was served, and I thought it was intriguing. I was not, however, sure how wise it was, as Cantu boasted, that one could “eat twigs sprinkled with Miracle Berry dust because it makes them taste sweet.” This, in a way, was a kind of triumph for Cantu as food magician: with the Miracle Berry he would now be able to feed you lemons that tasted as sweet as cherries, a tour de force of culinary illusionism. The Miracle Berry might help stave off starvation, but whether or not it did, one thing was certain: it was fun because it fooled our taste buds and us.

Stunts get headlines, though beyond the showmanship, Cantu’s flashy efforts did reflect a sincere desire to make enough food to feed the world and keep us happy if not giggly. Sometimes when you have a cause, you need to go a little overboard; you need to display some pizzazz to get some press. With all the attention generated by whiz bang antics, people might just listen to you and maybe, just maybe, they’ll conclude that yes, this man is hugely entertaining… and he also has an important message to communicate: let’s listen.

One cannot, at least I cannot, say for sure what motivated Cantu to take his own life because I didn’t know the man. Not really. And neither, probably, did you, because I’m guessing his last act on earth took everyone who knew him by surprise, and not the good kind of surprise that came from having dinner at his restaurants.

What I can say with assurance, however, is that he did challenge the way many of his diners thought about food; he did open up new areas of gastronomic experimentation, and he did focus—unremittingly, ingeniously—on sustainable cuisine in a fine dining restaurant, where such concern is not always welcome. And he did—Omar most definitely did—make us laugh every time we sat at his table.