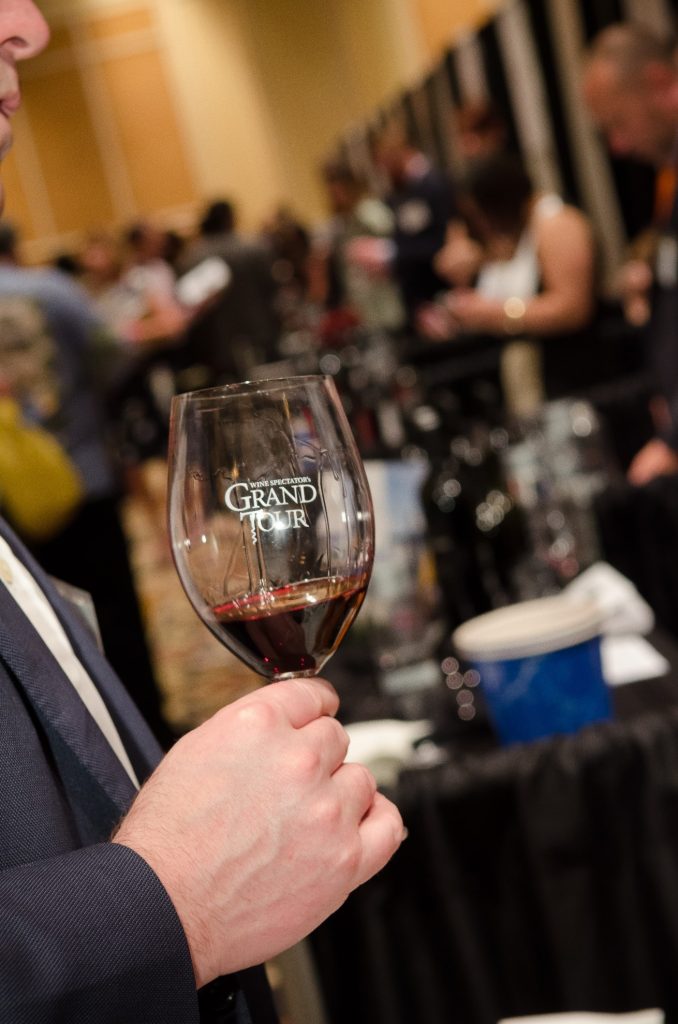 The two young women had won free tickets from the B96 radio station—which otherwise would have cost $225 each—to attend the Wine Spectator Grand Tour 2015 at Navy Pier’s Grand Ballroom. They obviously are enjoying the three-hour event, featuring sips of 228 of the best and most expensive wines from sixteen countries and four American states, with retail prices up to nearly $500 a bottle for top-of-the-line Bordeaux. It’s Alfaro’s and Emery’s first-ever serious wine tasting.

They both say they prefer sweeter white wines and sparklers to the drier, more tannic reds. “We used to drink boxed wine, whatever, give us the cheapest thing,” Emery says with a giggle. “Now this has opened our eyes to a lot of different wines.”

That’s exactly what the editors of the Wine Spectator, the well-known wine magazine that organized the Grand Tour event, hope to accomplish. It’s an opportunity for both novices and wine professionals to sample wines they’ve never had before, from countries and regions they don’t know, learn the stories of the people behind the wine, and educate their palates.

That’s what my wife Deborah and I are doing at the Grand Tour. We swirl, smell and sip about three dozen damn good wines that we mostly couldn’t afford to buy. We love the classics like French Bordeaux and Spanish Rioja reds and French Burgundy pinot noirs. But we are a little surprised by the high quality of wines from South Africa, Chile and Australia.

The two young women are the outliers at the event in terms of age and wine experience. Most of the several hundred attendees are either middle-aged or older amateur winos like my wife and me, or professionals from Chicago’s restaurant and wine industry.

Still, the pros seem to take as much pleasure as the amateurs in the Grand Tour, which comes to Chicago once every two years. That’s because it’s not like the numerous industry tastings they attend throughout the year to select wines for their restaurants, stores and distribution lists. 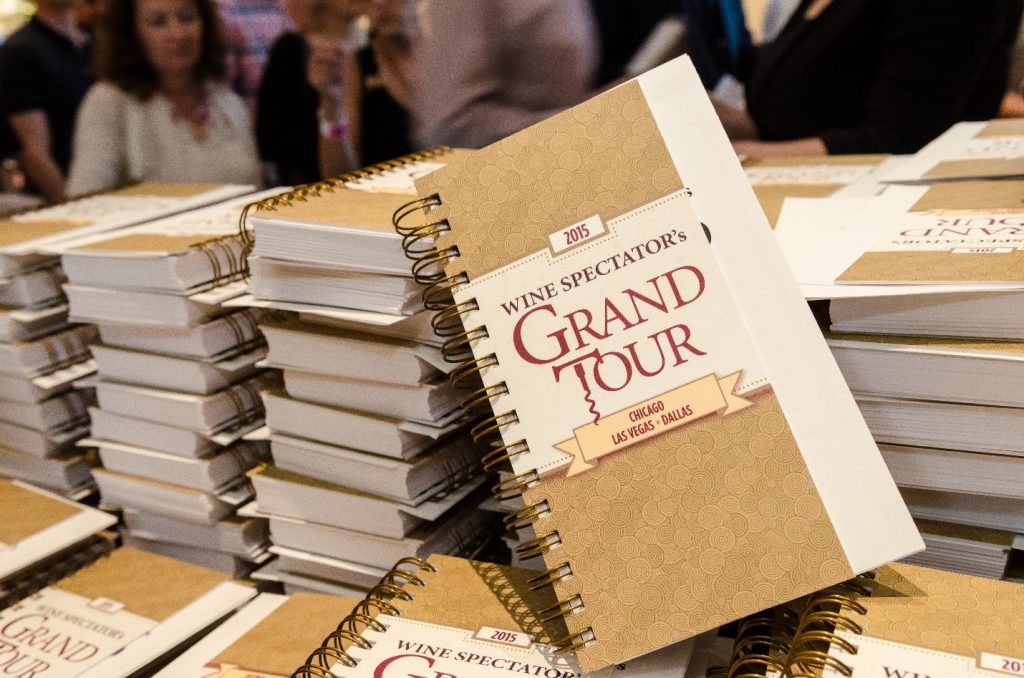 Most industry tastings are organized by particular distributors to sell the wines in their portfolio. In contrast, Wine Spectator selects the wineries without regard to distributor, with the goal of offering attendees a broad range of what its editors consider some of the world’s best wines. Unlike most tastings, each winery presents a single wine it wants to show off.

“We are shaping the event in response to reader interest,” says Tom Matthews, executive editor of the Wine Spectator. “There’s definitely increasing diversity—Canada, Greece, Hungary, South Africa, Mexico—great wineries from unlikely places. We’re trying to paint as broad a picture of the wine world as we can, not forgetting the benchmark classics.”

“I love it, I describe it as a homecoming,” says Peter Schwarzbach, who owns four Vin Chicago wine and spirits shops in Chicago and the suburbs. “It’s the one event every other year where everyone in the industry is there,” he says. And, for the most part, the wine professionals are there to enjoy, not to work, he adds.

It’s the first Grand Tour for Liz Martinez, beverage director and sommelier at the Purple Pig wine bar and restaurant on Michigan Avenue. She says it’s educational because she mostly stocks wine from Mediterranean countries such as Italy, Greece, Slovenia, Croatia and Lebanon. The event gives her a chance to more deeply explore top wines from France, the U.S., Australia, South America, and South Africa.

“It’s really exciting for me to taste high-scoring wines side by side from other parts of the world,” she says. “I get to see what my peers think, talk to winery owners to get their idea on things, and see what the New World wines are doing.”

You have to have a game plan when you attend the Grand Tour because in three hours you can’t realistically taste more than about forty wines—not if you want to do the wines any justice. And you better spit most of that juice into the buckets on each table if you want to be standing upright by the end of the evening. But it’s wise to be open to serendipity. If you spot something intriguing, go for it. Don’t feel enslaved to your plan. And don’t just taste the wine. Ask about the family that makes it, the weather conditions the year the grapes were picked, and interesting details about how the wine was vinified and aged.

Our game plan is to make a beeline to the balcony for the famous and pricey red Bordeaux wines—even though it’s standard to taste white wines first. I’m worried the line for those Bordeaux wines will get too long later on.

Schwarzbach says there’s nothing wrong with our strategy of starting out with big reds. “The acidity of some whites like Sauvignon Blanc will mess up later wines,” he says. “And tasting Champagne first throws off my palate for reds for at least twenty minutes.”

I’m happy we are starting there, because the 2007 Haut Brion is the definition of an elegant blend of Cabernet Sauvignon and Merlot—silky and balanced with a long finish. Retailing at about $427 a bottle, this is something we would not be able to taste otherwise. From there we work down the row of prestigious Bordeaux-blend wines from France, California, Washington state, South Africa, Chile and other countries. All are good—and some are wonderful.

One of my favorite moments on the balcony is meeting winemaker Luca Paschina from Barboursville Vineyards in Virginia (yes, Virginia). He reaches out to shake my hand, then offers us a soft, delicious blend of Merlot and Petit Verdot grapes. He tells us the Virginia climate is too hot and wet in some years to produce a vintage wine. Depending on the year’s weather, he decides which grape varietals did best and which to include in that year’s bottling.

After stopping at the simple but solid buffet table to lay down a food foundation for more sipping—Wine Spectator’s editors strongly advise eating at the buffet or before the event to avoid getting drunk—we descend to the main floor to taste French and American pinot noirs. Then it’s on to Spanish tempranillos, including a deep, earthy 2007 Rioja Gran Reserva from Cune, followed by Italian Barolos.

It’s here that I waste ten precious minutes in a quixotic search for a Mexican wine I thought was being poured, since I’ve never tasted a Mexican wine. You should have seen the surprised looks on the faces of the Italian winemakers and distributors when I asked where the Mexican Nebbiolo was. Turns out I was remembering an article mentioning this wine at a previous Grand Tour event. Oh well.

But enough about my amateur wine exploits. Michael Binstein, owner of thirty-one Binny’s wine and spirits stores in Illinois, has sent nearly four dozen of his staff to the Grand Tour event because of “educational value and joy of tasting the most iconic wines and meeting some of the most iconic winemakers in the world. It’s pretty extraordinary. It’s sort of the college of cardinals conclave for the wine industry.” He isn’t here, but he was personally planning to attend the Grand Tour event in Las Vegas.

For Jill Gubesch, wine director and sommelier at Frontera Grill and Topolobampo, the Grand Tour is the centerpiece of a memorable day featuring a tasting and luncheon with a famous Argentinean woman winemaker earlier in the day, and a wine dinner afterward with a major Italian distributor. “Wow, a long day but a really fun and exciting one,” she marvels.

Having attended the Grand Tour before, Gubesch uses the event for networking. Still, she loves the tasting itself, singling out the 2004 Chateau Pichon-Longueville Comtesse de Lalande. She later follows up by calling the distributor to see if any cases of that famed Bordeaux red were available for her restaurants.

At the end of the evening, young novice tasters Alfaro and Emery are bubbling with enthusiasm for the Italian Bisol Prosecco in their glasses, which they declare their favorite of the evening. “I realize it’s not all about partying,” Emery says. “It’s about the wine.”