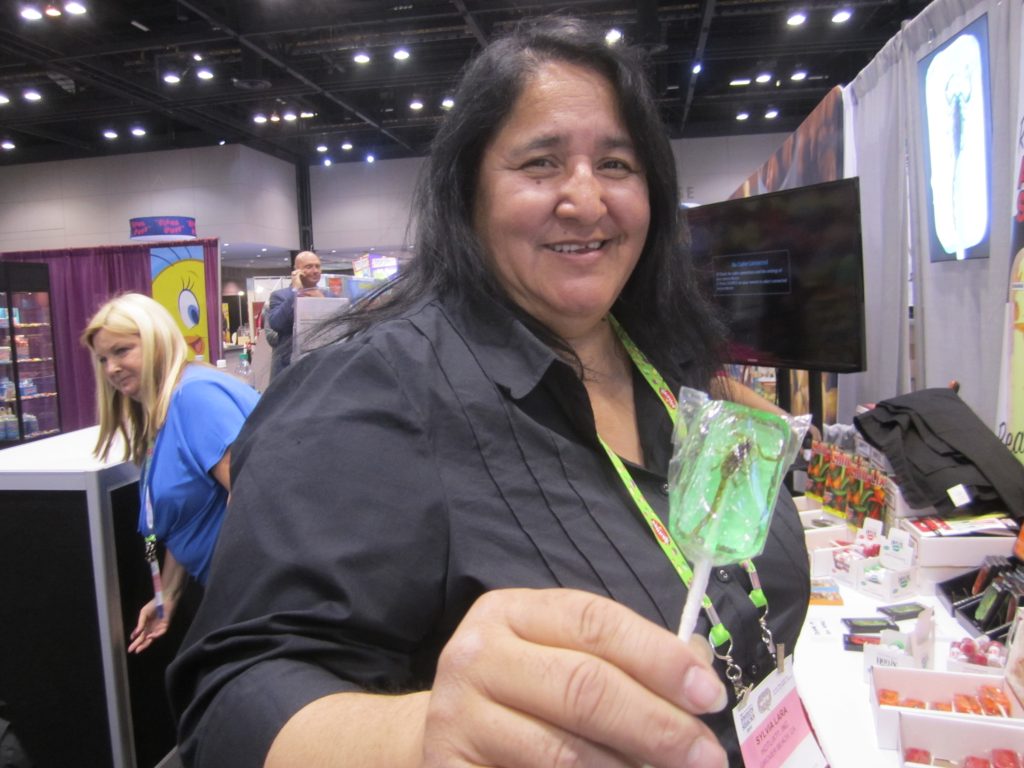 Have a scorpion sucker/Photo: David Hammond

In my throat, there was a cricket leg. At least I think it was a leg. Could have been mandible or wing. It was dry and scratchy. I coughed. It fell out. I didn’t examine.

Leaving last month’s Sweets & Snacks Show at McCormick Place, the last things I gobbled as I went toward the door were a selection of sweetened and spiced insects. The nice lady at the booth let me try the ants, worms and finally the crickets, which were dusted with a sour cream powder.

All the bugs tasted pretty much the same. Insects, it turns out, once fried, are crunchy but don’t taste like much. They need the added flavors of sour-cream powder, BBQ rub and Parmesan.

So if most creepy crawlers don’t taste like much, and if they’re admittedly kind of yucky, why eat them? Because, I would argue, at least in the U.S., you’re sorta not supposed to.

If there was one overriding theme at the Sweets & Snacks Show, it was “health.” The consistent characteristic of many of the novelties on display was that the ingredients were “good for you.” There were many gluten-free, naturally sweet and low-cal options. For instance, there were healthy lollipops, called Zollipops, that contain no sugar and that actually contribute to oral hygiene. All cool and probably the kinds of sweets and snacks I’d feed to my children if they ever took direction from me.

One can’t deny, however, the allure of sweets and snacks that challenge the boundaries of edibility, that seem a little wrong, beyond the norm, exceeding the limits of acceptability, forbidden… transgressive. 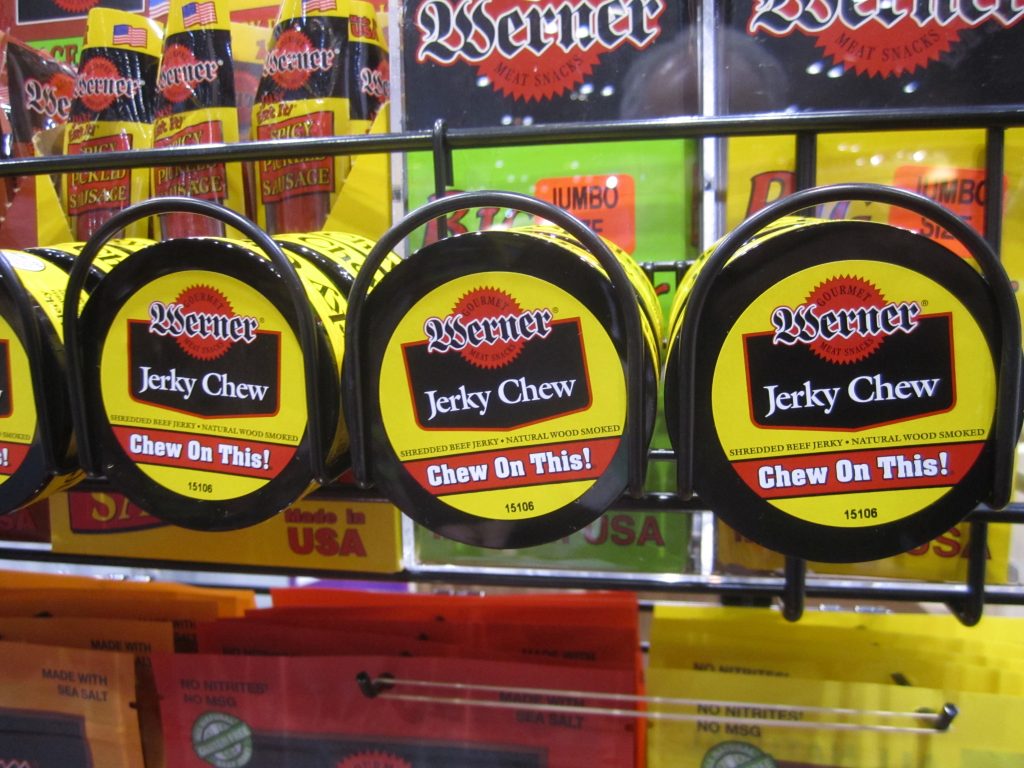 The first snack booth I visited offered shredded jerky in circular cans, simulating chewing tobacco. This treat was like the candy cigarettes we had as kids, and which are now rarely available. That they encourage unhealthy behavior seems likely, and their forbidden status is what attracted me as a kid, and may perhaps have contributed to several college years of smoking a pack a day of Lucky Strike.

At the show, there was a non-boozy beverage that came in Duff beer cans, Homer’s preferred brew, so that kids can practice becoming problem drinkers and dumb dads even before they’re of drinking age. 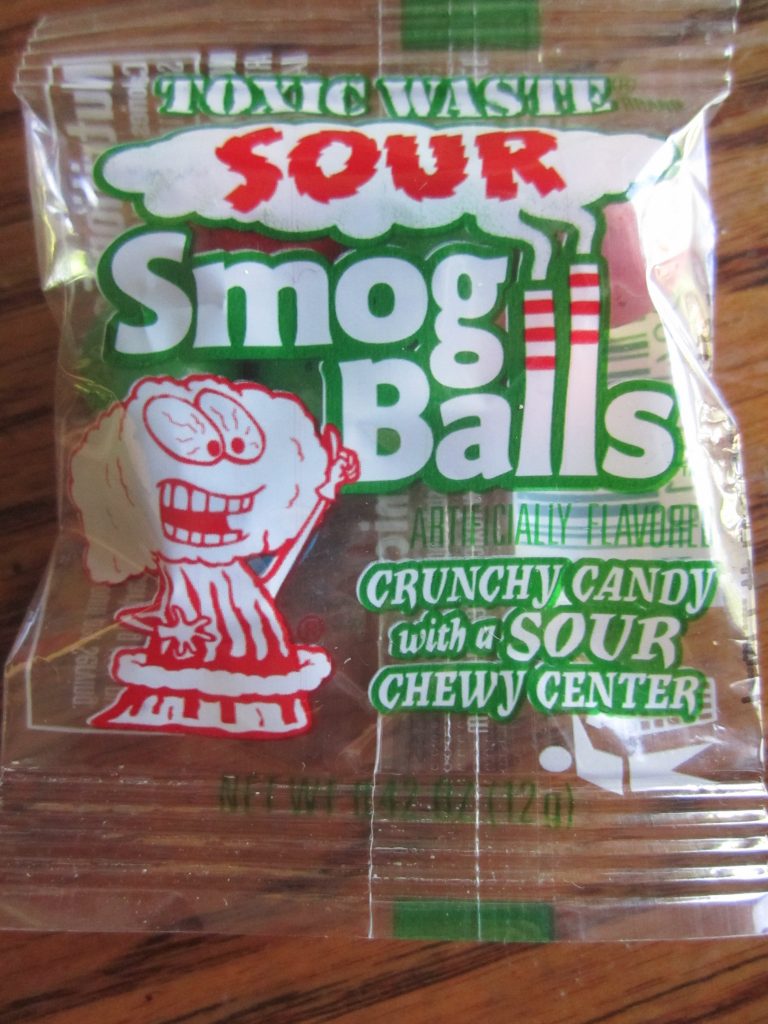 Of course, there are candies that transgress beyond beef “chew,” sugar cigarettes and pretend beer. Toxic Waste Sour Smog Balls, for instance, obviously don’t contain poison, but it’s fun to make-believe they do, to pretend to take a risk.

One of the most alluring compendia of candy in Chicago is the recently opened Dylan’s Candy Bar (445 North Michigan), a multi-level fantasy land of sweets. Beginning in New York and run by Ralph Lauren’s daughter, Dylan’s is a lot like F.A.O. Schwarz, but with candy instead of toys. It’s a fun place. Kids roam about, wondering at all the ways sugar can be configured. There were several older people, furtively eyeing the licorice whips and gummy globs, as though going after such child-like pleasures were somehow wrong. I was one of them and like them, I was regressing and transgressing at the same time.

Dylan’s has a vast number of nostalgia candies, but I was most intrigued by candy that represented itself as something that kids are told not to eat. For instance, there’s a Junk Food Candy Pouch, a “Dylan’s Candy Bar Mix-Clusive,” that contains gummy fried eggs (because fried = junk?), candy cola and burgers, the usual junk food suspects. As the website explains “A total slam JUNK!”

So what’s the appeal of transgressive candy, aside from the fact that it’s fun to be naughty, to do things one is not supposed to do?

I believe what’s at play here may be a variation on the phenomenon of “constrained risk.”

Here’s how that works: we eat something so intense—for instance, a food that’s extremely sour or chili hot—and our bodies actually sense that we’re under attack, we feel threatened, a little scared, just as we might on a roller coaster. We know we’ll be safe and we’re really not risking anything. It feels risky, but it isn’t; instead, it’s fun, and it might actually be a way of confronting and overcoming fear.

Eating extreme candy, whether really sour like some American candy, chili hot, like some Mexican candy, or perhaps labeled “toxic,” is a way to flirt with disaster, making believe that we’re taking risks, when we know that really everything will be okay. That’s a thrill you don’t get when you’re eating a bonbon from Fannie May or Godiva, candies that are simply sweet, however well made. Transgressive candies provide the added thrill of enjoying the forbidden, the things that seem to be that which we know we should not eat. Fun, right?!