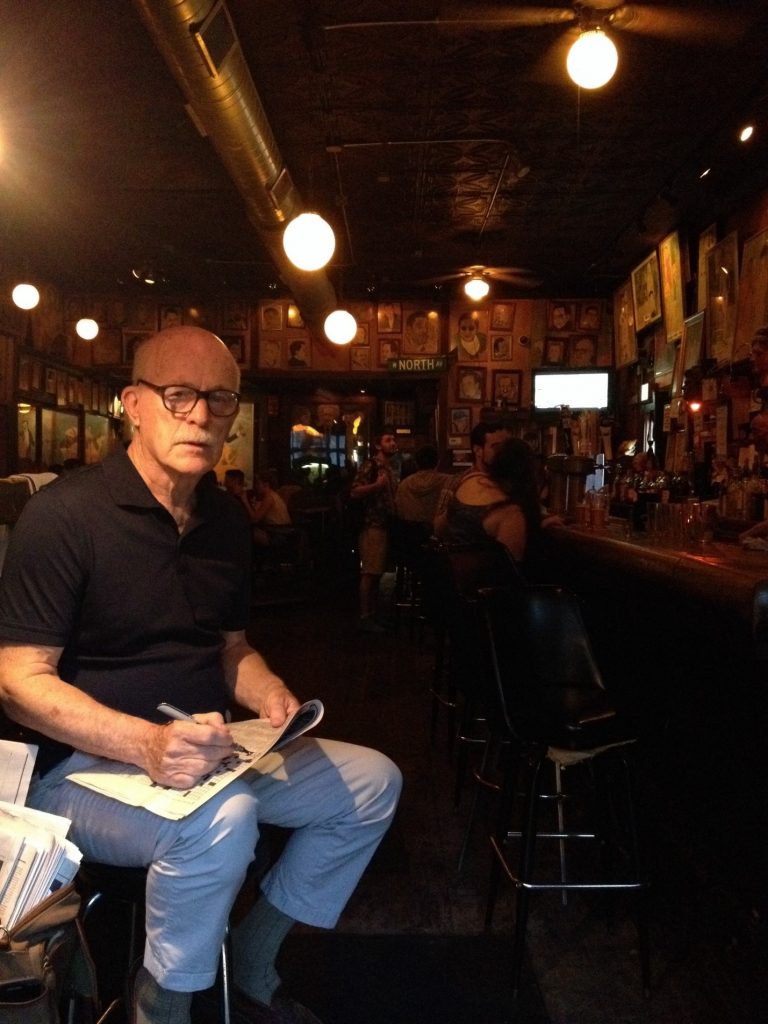 Old Town Ale House (219 West North) has no bouncers. According to owner Tobin Mitchell, the iconic late-night bar—known for lewd political paintings and Second City patrons—has “doormen.” And not just any doormen.

Walk into the dimly lit bar Sunday through Wednesday, from 8am to 4am, and you’ll spot a seventy-four-year-old guy at the door by the name of Bill Currie, but everyone calls him Hawkeye. Currie sits on a stool by the door, a plaid bag full of New York Times newspapers right next to him. He does four crosswords every day. An institution at the Ale House and beloved by Second City students, Currie tells stories, makes winking wisecracks and, if he finds you interesting, he’ll try to suss out the Gaelic roots of your name.

Mitchell, owner for the past ten years, describes her old-school bar and doormen this way: “We do not have loud, obnoxious customers that fight. Our doormen are greeters. We attract a mature crowd and have always had musicians, actors and interesting clientele because of our location and ability to keep it simple…Michael Shannon or Lady Gaga could drop by and not be pestered.”

On weekends, when the Ale House is open till 5am on Saturdays, bar-goers will meet Lemar Brown, a fifty-year-old currency trader. At six-foot-four, with seven years of martial arts training under his belt, Brown plays more of a “bouncer” role than Currie, but likes to think of himself as a “concierge.”

When checking IDs, the easygoing South Sider lowers his voice to sound warm and comforting. He knows many patrons by name, and makes a special effort to recommend nearby bars and restaurants to visitors.

“They don’t like to use the term ‘bouncer,’ and I don’t either because it’s intimidating and somewhat aggressive,” Brown says. “When you show up at my door, I’m the first face you see. So I want you to feel welcome, safe, like you’re going to have a great time, because you came here when you could have gone anywhere else.”

At 3:30am on a Saturday, Brown is sitting on the same stool as Currie was earlier in the week, dressed all in black with white Nike high-tops. As Patsy Cline’s “Walkin’ After Midnight” drifts over from the jukebox, Brown tunes into “Panic! at the Disco” on a headphone dangling from one ear. Nearby, two couples make out at a table, and a narcoleptic drunk who just got kicked out for falling asleep wandered back in. Brown’s aware of it all. During the course of the night, he jumps to the bar to belly laugh with friends, steps out to smoke, greets bar-goers like they’re old friends (he’s a hugger), and firmly tells the narcoleptic to please, no kidding, leave.

Both Currie and Brown have strong ties to the Ale House. Currie’s been coming there since the early seventies, back when it was a media bar, serving guys like Roger Ebert, who made this place his hangout. Currie even met his wife there. Brown started coming to the Ale House about four years ago after playing golf with Bruce Elliott, the self-described “mascot” of the bar and its resident artist. Both Currie and Brown have portraits on the wall painted by Elliott. (Next time you’re there, check out the one by the jukebox of Currie playing the bagpipes next to a rather, ahem, supine Humphrey Bogart.)

Currie and Brown’s backgrounds don’t seem much like your average doorman’s.

Currie won a Pulitzer Prize in 1972 for a Chicago Tribune investigative piece he co-wrote about voting fraud in Chicago—which he downplays. “People here ballyhoo that more than I do. At my age, I try to play it down. It’s embarrassing. What have I done since?”

Brown has a bachelor’s degree in psychology and is certified in IT; at age forty, he got a golf scholarship to go to Prairie State College, where he played on a team with eighteen-year-olds. Oh, and Brown’s dad is Leroy Brown. Yes, “Bad Bad Leroy Brown.” Like Currie’s Pulitzer Prize, Brown downplays the connection. “It’s a curse,” he says. During the week, Brown trades currencies in three shifts ranging from 3am to 10:30pm. He gets about three-and-a-half hours of sleep a night.

So why do a seventy-four-year-old Pulitzer Prize winner and a fifty-year-old trader spend their nights flashlighting IDs and kicking out drunks at a 4am dive bar when they don’t have to?

For Currie, the job seems almost meditative. “Time just goes like that [snaps fingers]. This [gestures around the bar] slows it down.”

These bouncers, doormen, concierges—whatever you call ‘em—are a big part of what makes Old Town Ale House a Chicago institution. Say hi if you drop in for a beer—but please, no sleeping at the bar.