With thousands of variations worldwide, ramen has always been a hot mess of flavor and texture that invites playful experimentation. And that’s what Chicago ramen battles are all about. Invited by host restaurants, chefs have jumped into the ramen-battle ring with characteristic Chicago swagger. Most of their ramen bowls have been great, some not so, but there’s no denying the exhibitionist fun of the throw-downs.

Chef leaders of the Chicago ramen-battle pack are Bill Kim (BellyQ, UrbanBelly, Belly Shack) and Matthias Merges (Yusho, A10, Billy Sunday), and both have been hosting two different styles of ramen-offs.

Kim launched Ramenfest in 2014, inviting nearly thirty chefs to battle, in a guests-choose-the-best-taste showdown that raised $3,000 for Common Threads, an organization devoted to fighting childhood obesity. His next happens November 7; tickets and info at ramenfestchicago.com. Meanwhile Merges has been hosting Sunday night ramen-battle invitationals pitting two or three chefs against each other at his Logan Square restaurant Yusho; the fourteenth battle launches July 26. 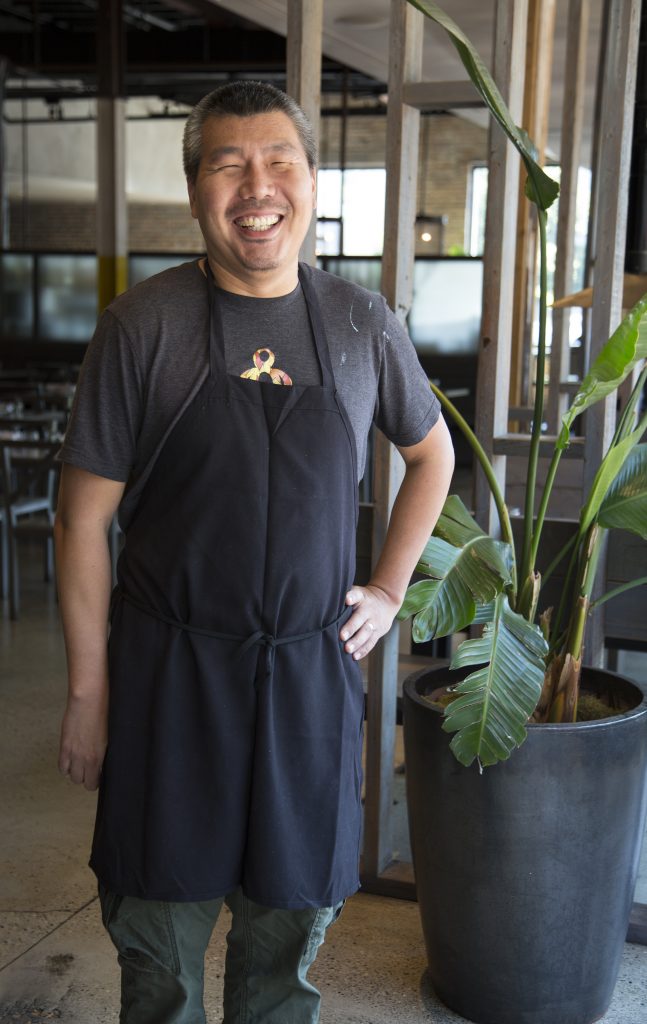 Why do it? In addition to the good-cause connection, both chefs say the battles introduce guests to the many splendors of ramen and give participating chefs what they crave most: the chance to create and taste new things and to hang out and compete with their chef friends outside of their working kitchens. Says Merges: “When I was a young chef, every restaurant was its own island; there just wasn’t much opportunity to hang out in a collaborative, fun way.” Now, there is.

“They are fun,” says Patrick Sheerin, chef at The Trenchermen, “And I’m a competitive guy, so the battles force me to go down the rabbit hole and really think about how to twist the creativity in a way that people get, and that at the same time, makes them think. And, come out with a winning dish.”

“I was crazy excited to be invited!” says Jonathan Zaragoza, currently at Birrieria Zaragoza. “The battles are a good way to see what other chefs are doing, try new things and meet a wider audience.”

Many of the chefs who’ve done—and won—ramen battles had little to no ramen-making experience beforehand. “Me? None!” laughs Tom Van Lente of Big Star, who won a battle with a smoky stock made with chicken feet, pork bones and skin, combined with dashi and topped with lime-cured hangar steak. Acadia chef Ryan McCaskey, champion of Kim’s 2014 Ramenfest, had no previous ramen experience either. Both spent months in battle-bowl planning, first learning about the classic stocks and methods used to build complex flavors in the soup before moving on to do their own versions.

“I spent two weeks on the noodles alone,” says McCaskey, whose winning ramen included hand-made and -cut noodles in a tonkotsu broth of pork bones and pork belly, finished with blonde miso, house-made sriracha and two quarts of emulsified pork fat (!) per batch.

There are few actual “rules” for ramen, but top contenders (like McCaskey’s winning bowl) include a rich broth that is not overly complicated, good acidic notes, and noodles from dough that includes kansui, the alkaline salt that gives ramen its yellowish color and toothsome springiness. “The noodles have to be good” says Kim, “but the broth makes the winner.” 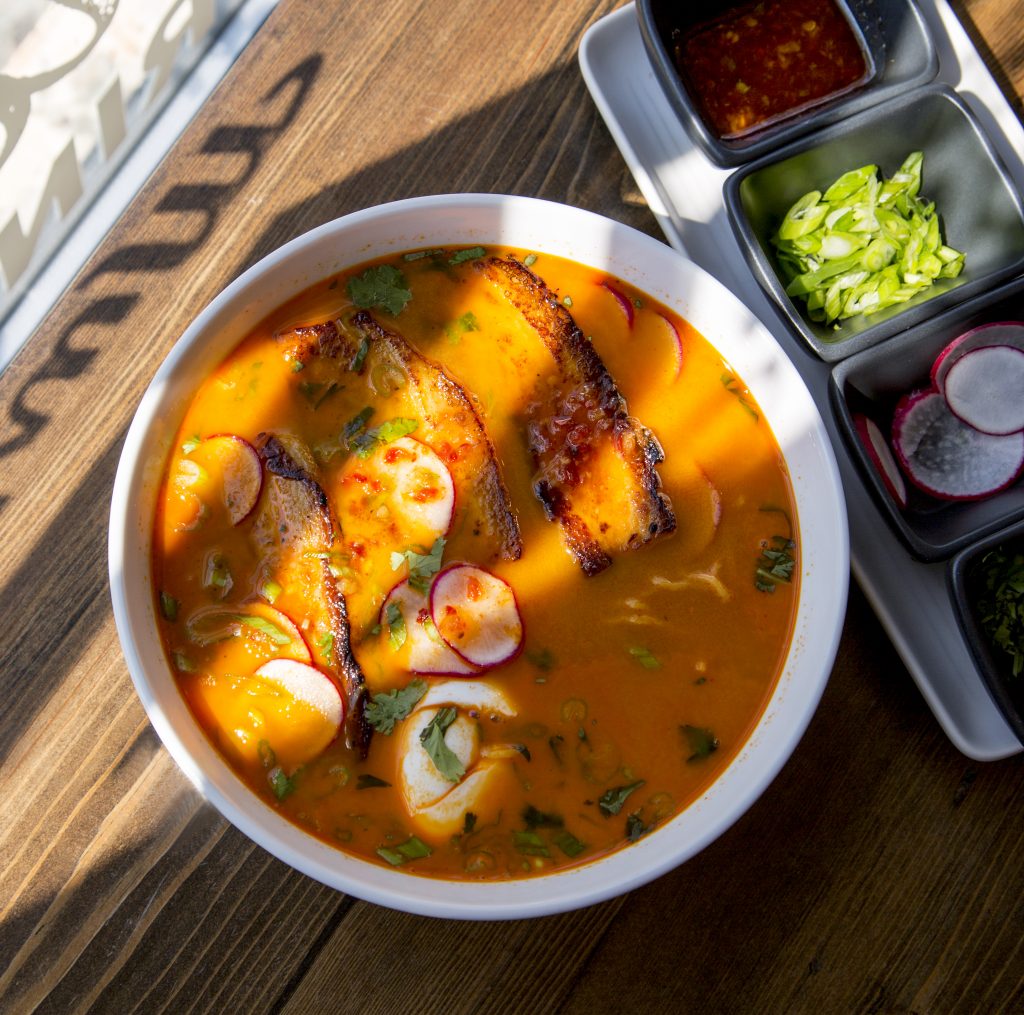 Of course, not all great bowls of ramen are winning bowls. “Ramen can be very polarizing,” says Brendan Sodikoff of High Five Ramen. “Take our [extremely hot] kanabo-spice ramen. Done right, it creates a painful, but euphoric experience. Some people adore it and eat it four times a week. Other people won’t touch it. So for me, making great ramen isn’t about mass appeal, it’s about integrity, quality and having a vision.” 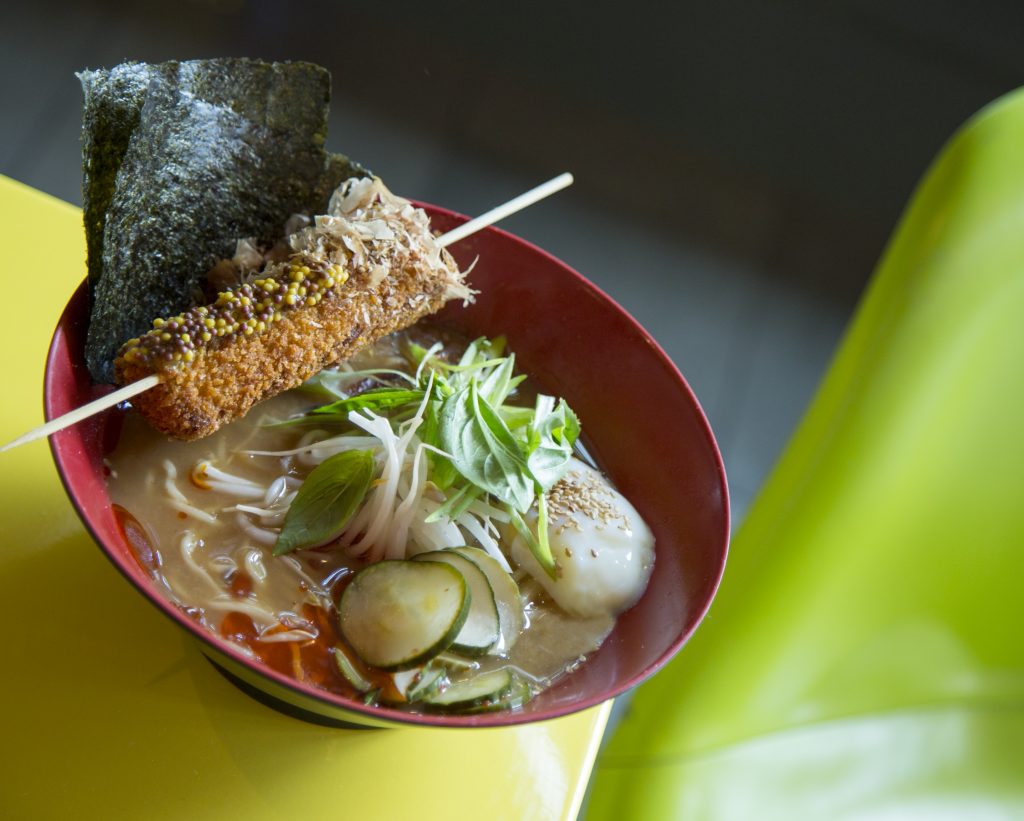 To get a taste of complex competition bowls like that one, you’re best off going to one of the ramen battles. But a few bowls happily stick around after the challenge. You can still slurp Ryan McCaskey’s winning ramen on Sundays at the Acadia Bar. And ramen specials you’ll be seeing at top ramen shops around town in the next few months may offer sneak peeks of dishes chefs will be competing with at the next Ramenfest.

Also on the horizon, Merges may take his ramen-battle show on the road, bringing Chicago’s best ramen nationwide. “A ramen bus doing popups with chef ramen-battles across the country,” Merges muses: “It’s gonna be great.”